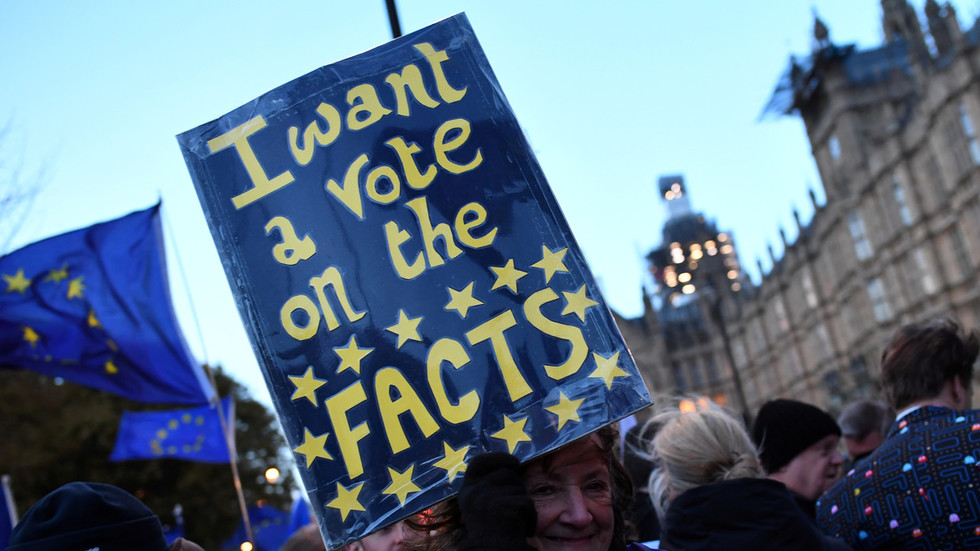 Millions have signed a request for Britain to stay in the EU as people march for the voters’ right to have the “final say” on Brexit, with London’s mayor among them.

The petition asking Britain to “remain in the EU” gained more than 4 million signatures on Saturday morning, making it the most popular petition ever submitted to the Parliament website, local media reported.

It’s not immediately clear, however, if all the signatories are genuine British citizens, since ‘confirmation’ of citizenship is made simply by checking a box. The petition has surpassed the 10,000-signature threshold required for the government to “respond” to it, as well as the 100-thousand threshold to force Parliament to “consider” it.

Also on rt.com ‘This sign is more stable than our government’: Best #PeoplesVoteMarch placards in PHOTOS

At the same time, thousands are expected to join the ‘Put It On the People March’ in London, demanding that the British public have the “final say” on Brexit. The organizers proposed a plan under which London would call off its immediate decision to quit the EU, and then carry out a separate referendum on the terms of Brexit.

Among those attending the rally is London Mayor Sadiq Khan. “No matter how you voted, I’m sure you’ll agree: Brexit is a complete and utter mess,” he said, calling on others to join him on the streets.

The nation risks “falling off a cliff edge with catastrophic consequences,” Khan warned, referring to a looming no-deal Brexit.

No matter how you voted, I’m sure you’ll agree – #Brexit is a complete and utter mess.

It's time to give us – the British people – the final say. #PeoplesVote 🇪🇺 pic.twitter.com/TqUrcqd174

The prospect of Britain leaving the EU remains the government’s default legal position after Prime Minister Theresa May’s hard-fought plan was rejected twice by Parliament. Consecutive defeats prompted May to frantically engage in a new round of talks with Brussels.

Also on rt.com Tusk: ‘Lots of space’ in hell for British MPs who vote against Brexit deal

The EU refused to renegotiate the deal, but agreed to move the UK’s withdrawal date from March 29 to May 22 – if lawmakers approve May’s plan next week. If not, she will have until April 12 to propose a new one.