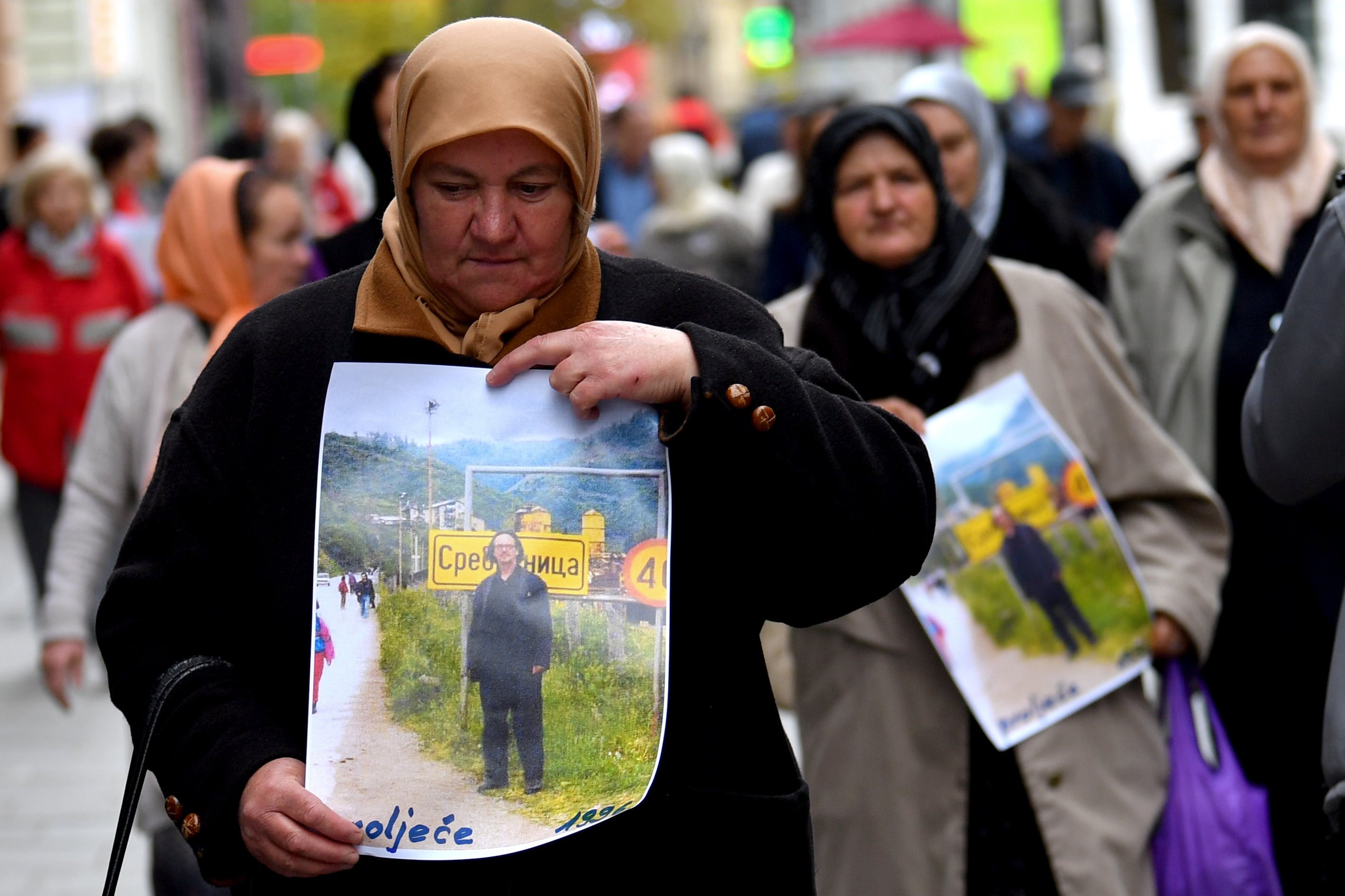 Women from Srebrenica and Bosnian war survivors demonstrate against Peter Handke’s Nobel Prize outside of the Swedish Embassy in Sarajevo on Nov. 5, 2019, holding pictures of Handke in Srebrenica.

It has come to this: The Nobel Prize organization has not merely selected a genocide denier for its 2019 literature award. The organization itself has become an open skeptic of the mass murder of Bosnia’s Muslims.

In a letter to a group of publishers in Bosnia, the Swedish Academy, which selects the winner of the Nobel Prize for Literature, made several stabs at gaslighting not just the survivors of the genocide, but also the historians, war crimes investigators, and journalists who documented the 1992-1995 onslaught. Rather than reassessing its heavily criticized choice of Peter Handke, the 18-seat Swedish Academy doubled down by coming out, for the first time, in defense of the worthiness of the Austrian-born writer’s skepticism of the genocide by Serb military forces.

“The Swedish Academy believes that in an open society there must be room for different opinions about authors and that there must be space for different reasonable interpretations of their literay [sic] works,” the letter said. It was signed by Anders Olsson, chair of the Nobel Committee for Literature, and dated November 15; news of it began circulating on social media two days ago. “We strive for respectful interchange notwithstanding sharply diverging views in important matters,” the letter added.

In this instance, the important matter is genocide, and the diverging view is that it did not happen. The letter has a tragicomic aspect too — the world’s most famous literary group was unable to properly spell the word “literary.”

The works in questions are the multiple books in which Handke asked whether deadly Serb bomb attacks on Sarajevo might have been committed by Muslims against themselves, to stir global anger against Serbs; suggested that Muslims were partially responsible for the Serb massacre of more than 8,000 men and boys in Srebrenica because some Serbs died in earlier fighting; argued that the pictures of Muslim victims of ethnic cleansing had been staged by photojournalists; stated that all sides in the Bosnia war had prison camps of equivalent brutality; and questioned whether it was right to call Serbs “aggressors” in the conflict. This is a very partial list of Handke’s revisionist writings, all of which are refuted by decades of journalism about the war, investigations by human rights groups and, most importantly, resounding verdicts against Serbs at the International Criminal Tribunal for the former Yugoslavia, or ICTY.

Jasmin Mujanovic, a political scientist and Balkan expert, issued a scathing response after the letter began circulating. “The issue is no longer Handke,” Mujanovic wrote on Twitter. “His revolting views were always clear & known. The issue is w/the @NobelPrize committee, an institution now wholly committed to the cause of genocide denial and historical revisionism.” Emir Suljagic, a survivor of Srebrenica, wrote that “it is shocking, just shocking” that the Swedish Academy believes that “different reasonable interpretations” can be made of Handke’s denialism.

The letter constitutes the Nobel organization’s most forthright response in the controversy set off last month by its selection of Handke for the 2019 literature prize. The letter tries to make a false distinction at the very start, contending that the critiques aimed at Handke are inappropriate because they are about his personal views rather than his literary work. As the letter states, “When Handke is awarded the prize, the ambition is to celebrate his extraordinary literary work, not the person.” But this is enormously deceitful — the bulk of the criticism circles around what Handke wrote on the Bosnia war, particularly these books: “A Journey to the Rivers,” “Summer Addendum to a Winter’s Journey,” “Around the Grand Tribunal,” “The Tablas of Daimiel,” “The History of Dragoljub Milanovic,” “The Coucous of Velika Hoca,” “Asking in Tears,” and the play “The Journey in the Dugout Canoe.” 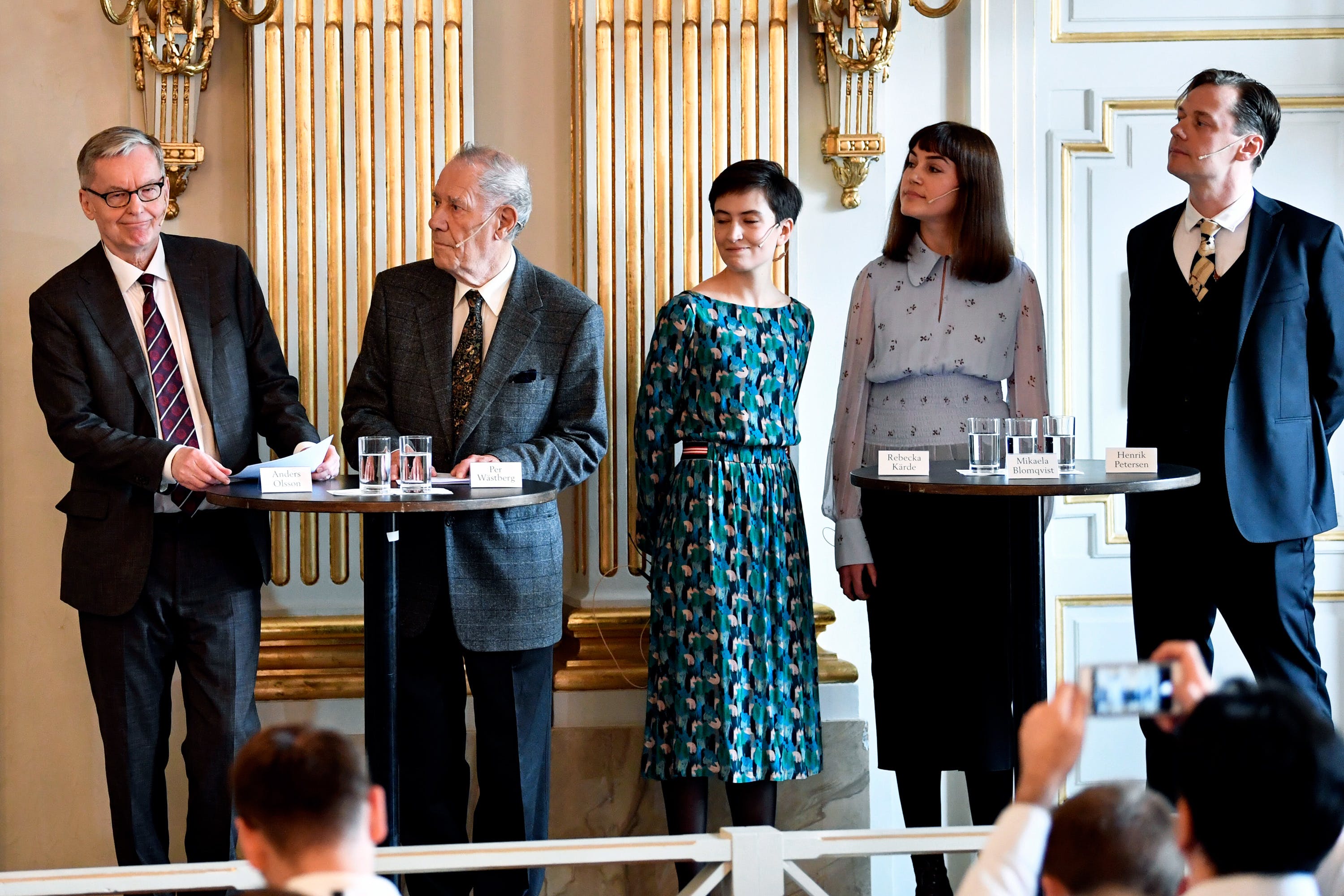 Members of the Swedish Academy and its external specialists, from left, Anders Olsson, Par Westberg, Rebecka Karde, Mikael Blomqvist, and Henrik Petersen, after the announcement of the winners of the 2018 and 2019 Nobel Prizes in Literature, in Stockholm, Sweden, on Oct. 10, 2019.

The Nobel Prize organization appears ignorant of a basic fact about genocide: Outright lying is just the most obvious method of denying it. Experts on genocide (not just the one in Bosnia) consistently note that casting doubt is another form of denial. As I wrote in a previous article, a paper by Israel Charny of the Institute on the Holocaust and Genocide described genocide denial as including claims that deaths were inadvertent or unauthorized by political leaders, that there were not as many deaths as reported, or that the victims were killed in retaliation for previous killings they had carried out. These are the sorts of statements made in Handke’s books. It’s worth referring again to what I was told by Edin Hajdarpasic, a historian of modern Europe at Loyola University Chicago:

What I’m realizing is that surprisingly few people understand what genocide denial is, and what different forms it can take in the ultimate service of denial. Genocide denial does not just look like [former Iranian leader Mahmoud] Ahmadinejad: deliberately appalling, aggressive, uncouth, brazen in calling established events “lies.” Handke is not like that. Handke knows not to call Srebrenica or the entire siege of Sarajevo a lie. If one seeks to destabilize truth, it is better, Handke knows, to ask questions with lots of clauses, subjunctives, conjectures, and other stylish pauses so that the perverse implication of his questions can be denied.

The Swedish Academy’s letter has elicited grim scorn on social media. The sharpest and briefest may have been this five-word tweet: “try this with holocaust lol.” The intellectual holes in the letter are too numerous to parse in this story, even though the letter occupies less than a page. But one thing to note: While saying that Handke’s views are reasonable enough for discussion, the letter also says that everyone should rely on the “lawful findings of courts such as the Hague Tribunal,” which the letter describes as “an essential part of the understanding of Europe’s tragic history.” Yet the verdicts of the ICTY at The Hague are crystal clear. The political and military leaders of the Serbs in Bosnia, Radovan Karadzic and Ratko Mladic, were both convicted of crimes against humanity and genocide, and are serving life sentences. The Serbian leader who masterminded the war, Slobodan Milosevic, was on trial for charges that included genocide when he died of a heart attack.

You cannot have it both ways. You cannot mouth fidelity to the genocide verdicts of The Hague and at the same time contend that Handke’s questions about the genocide are reasonable.

In its final line, the letter attempts to square this circle by referring to a short statement that was attributed to Handke by his German publisher last month, shortly after the news broke that in 2011, Handke had said he did not believe the grieving mothers of the victims of the Srebrenica massacre and that he would not condemn the Serbs for what they did there. In the short statement from his publisher, Handke is attributed with a corrective, saying of Srebrenica, “The genocide has caused infinite suffering, which I have never denied. … I regret my remarks if they have conveyed something else.”

This was the first time, as far as I can tell, that Handke described what happened in Bosnia as a genocide of Muslims. The fact that this statement — which came from his publisher, not directly from him — arrived in response to the damaging revelation that he had clearly said the exact opposite does not inspire confidence. There is only one other occasion on which I have seen Handke, in one of his books, apply the word “genocide” to the former Yugoslavia. It was in his book “Around the Grand Tribunal,” in which he quoted without criticism the claim by Milosevic that the hostile policies pursued by the Clinton administration constituted a “genocide of the Serbs.”

To Flee or Not to Flee? In Honduras, A Child Braves Tear Gas to Sell Vinegar Bags