The Trump administration’s tariffs on steel, aluminum, solar panels, washing machines, and a host of Chinese-made industrial and consumer goods…

The Trump administration’s tariffs on steel, aluminum, solar panels, washing machines, and a host of Chinese-made industrial and consumer goods have increased taxes by $ 42 billion*, with poorer Americans feeling more of a pinch.

That’s the bottom line of a new report on the tariffs published Wednesday by The Tax Foundation, a nonpartisan think tank. The Trump tariffs have reduced after-tax income by about 0.3 percent on average, according to the study, equating to a decrease of $ 146 in after-tax income for middle class Americans. The Tax Foundation’s economic model suggests that the tariffs will reduce the gross domestic product, a short-hand measure for the overall size of the economy, by about $ 30 billion while also depressing wages and costing more than 94,000 jobs.

“These tariffs will increase the tax burden on Americans, falling hardest on lower and middle-income households, and reduce economic output, employment, and wages,” writes Erica York, the author of the study.

What was that about trade wars being good and easy to win? 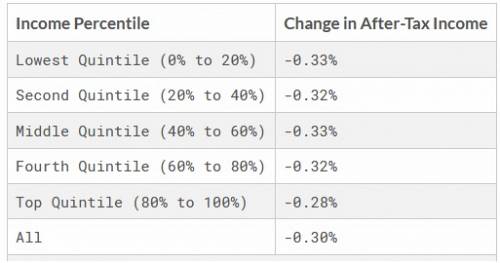 If Trump follows through on his threats to impose more and higher tariffs on China along with new tariffs on imported cars, after-tax incomes would fall by an average of 0.92 percent, according to The Tax Foundation.

The study makes clear, once again, that American consumers and businesses are the ones who pay the price of tariffs—not China or Chinese-based exporters, as the Trump administration continues to argue. When goods subject to tariffs enter the United States, the import taxes added by the Trump administration artificially increase the price of those goods, and those higher prices are passed along to subsequent buyers. Higher steel prices, for example, get passed along the supply chain to increase the purchase price of everything from cars and homes to beer kegs and industrial widgets.

From the start, the debate has been a question not of whether tariffs would harm the economy, but what the magnitude of that harm would be. A March study by the Trade Partnership, a Washington-based pro-trade think tank, projected that tariffs on steel and aluminum would grow those industries by about 33,400 jobs, but will also wipe out more than 179,000 other jobs. That’s about 146,000 net job losses—five jobs lost for every job gained. A similar study by the Coalition for a Prosperous America, which favored the tariffs, projected a net loss of more than 10,000 jobs.

In the months since, hundreds of American companies have reported being harmed by the tariffs. Major carmakers such as Ford and General Motors expect to lose nearly $ 1 billion this year because of tariffs, and the stock market remains deeply skeptical of the president’s seemingly ironclad confidence that trade barriers will work despite all indications otherwise.

The Tax Foundation analysis is a good reminder that the tariffs are not just affecting corporate balance sheets and Wall Street stock portfolios: These higher taxes are insidiously robbing all of us by nudging prices higher and diverting more revenue to the federal government.

CORRECTION: This post has been updated to correct the estimated tax increase tied to the tariffs. It is $ 42 billion, not $ 42 million.

ESG: Friend or Enemy of Liberty?

Something Upon Which Americans Can Agree: The FBI and the IRS Suck