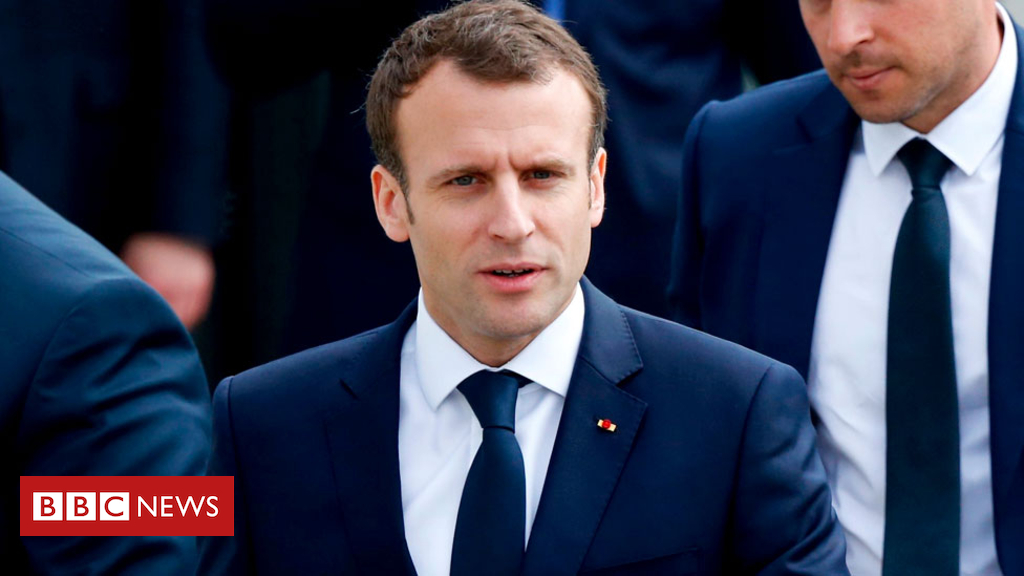 France’s President Emmanuel Macron says he has “proof” that the Syrian government attacked the town of Douma with chemical weapons last weekend.

He said he would decide “in due course” whether to respond with air strikes.

Western states are thought to be preparing for missile strikes in response to the alleged attack.

In Russia, Syria’s main military ally, Kremlin spokesman Dmitry Peskov urged against “any steps which could lead to an escalation of tensions”.

US President Donald Trump, who said on Wednesday that missiles were “coming”, has now tweeted that he “never said when”.

It “could be very soon or not so soon at all”, said the president, who has cancelled a planned trip to stay in the US with his defence secretary, and has been canvassing support for strikes from the leaders of France and the UK.

Never said when an attack on Syria would take place. Could be very soon or not so soon at all! In any event, the United States, under my Administration, has done a great job of ridding the region of ISIS. Where is our “Thank you America?”

The British Cabinet is due to discuss the government’s response later. Sources have told the BBC that Prime Minister Theresa May could be ready to join military action without seeking parliamentary consent first.

Also on Thursday, the UN Security Council is to hold an emergency meeting to discuss on the crisis.

The French leader had previously said any strikes would target the Syrian government’s “chemical capabilities”.

He did not give the source of his information but said: “We have proof that last week chemical weapons, at least chlorine, were used by the regime of Bashar al-Assad.”

Asked in a TV interview whether France would join strikes on Syria, he said: “We will need to take decisions in due course, when we judge it most useful and effective.

“France will not allow any escalation that could harm stability in the region,” he said. But, he added: “Regimes that think they can do everything they want, including the worst things that violate international law, cannot be allowed to act.”

What happened in Douma?

But President Assad’s government denies being behind any chemical attack.

The international Organisation for the Prohibition of Chemical Weapons (OPCW) has said it will go to Douma “shortly”, but it is unclear when it would arrive and how much evidence of any chemical attack might remain.

Douma was the last major rebel stronghold near Damascus. Local activists say the main leaders of the group that held it have left, following an agreement between Russia and the rebels.

Russian claims that the town had been taken over by Syrian forces could not be independently verified.

What is Russia’s position?

Russia has described the reports of a chemical attack as a “provocation” designed to justify Western intervention against its ally, and accused militant rebels of fabricating it.

Senior Russian figures have warned that missiles threatening the country’s forces in Syria would be shot down and their launch sites targeted.

On Thursday a foreign ministry spokeswoman asked whether the aim of Western strikes might be “to quickly remove the traces of the provocation”.

President Vladimir Putin said he hoped common sense would prevail and that the situation would stabilise.

Do you have a question about the conflict in Syria? Or the diplomatic discussions over it? You can send it to haveyoursay@bbc.co.uk.

You can also contact us in the following ways: