The Trump tax plan will likely lead to a corporate income tax cut of $ 135 billion in 2018 alone…. 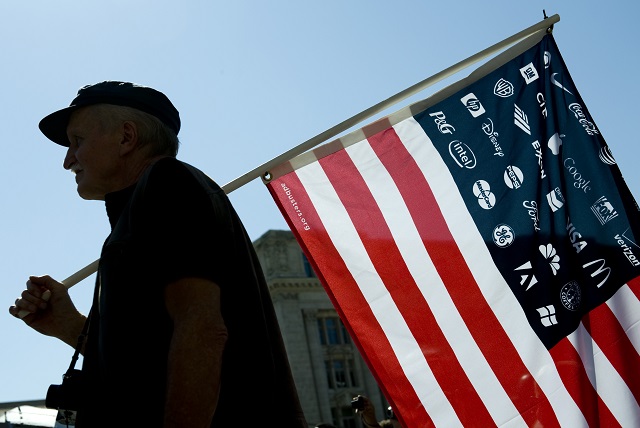 The Trump tax plan will likely lead to a corporate income tax cut of $ 135 billion in 2018 alone. (Photo by Linda Davidson / The Washington Post via Getty Images)

Individual taxpayers are contributing five times more money than corporations to the federal government via the 2017 taxes that are due today. A significant portion of this money is going directly to military contractors who pay their CEOs millions of dollars. A 10 percent cut in spending on military contractors would fund 395,000 school teachers or provide health insurance for 13 million children.

The Trump tax plan will likely lead to a corporate income tax cut of $ 135 billion in 2018 alone. (Photo by Linda Davidson / The Washington Post via Getty Images)

Want to see more coverage of the issues that matter? Make a donation to Truthout to ensure that we can publish more original stories like this one.

The IRS is projected to gather roughly $ 1.6 trillion in individual income taxes this year, and these taxes will make up almost half of the revenue of the federal government for 2017.

By comparison, corporations are expected to pay $ 297 billion in federal income taxes. Individuals will contribute five times as much in income taxes to the federal government as corporations do.

It wasn’t always this way. Corporations used to pay more income taxes than individuals did. In 1943, for example, corporations contributed 40 percent of federal revenues, compared to just 9 percent today.

The Trump tax plan will likely lead to a corporate income tax cut of $ 135 billion in 2018 alone.

The failure of corporate tax contributions to keep up with individual income taxes is even more egregious considering that corporate profits are at historically high levels. According to an analysis from the Economic Policy Institute, corporate profits were 5.5 percent of the national economy in 1952, compared to 9.5 percent in 2017.

Meanwhile, the federal government’s shift away from taxing corporations is about to become even more extreme in the coming year, now that Trump’s tax plan has taken effect and funds even more corporate giveaways in the 2018 tax year.

The Trump tax plan that passed Congress at the end of 2017 is set to cut corporate taxes even more, shrinking the corporate tax rate from 35 percent to just 21 percent.

Even before the Trump tax plan, the US collected less taxes from corporations than do many other advanced economies. The effects of the Trump plan are likely to mean the US will be dead last among advanced economies in the corporate taxes it collects compared to the size of the economy. The Trump tax plan will likely lead to a corporate income tax cut of $ 135 billion in 2018 alone.

In 2017, the average individual taxpayer contributed $ 1,600 to military contractors.

The tax plan also rewards a top corporate tax avoidance strategy: corporate offshoring. Before the passage of the latest tax plan, corporations that hold their profits overseas were already able to avoid paying federal income taxes, and many make indefinite use of this loophole to avoid taxes. Now, the new tax plan allows them to bring these profits back to the US while paying only a tax rate of 15.5 percent, even lower than the reduced 21 percent corporate tax rate.

Meanwhile, the wealth that was supposed to flow from corporations to individual workers as a result of these tax cuts is not panning out. Even as they loudly trumpet bonus packages or wage hikes for workers, corporations have mostly opted to reward stockholders. A combination of increased distributions to stockholders and stock buybacks rewards shareholders, who tend to be wealthy, and does next to nothing for workers.

Income taxes fund a federal budget that provides deeply needed public services that couldn’t happen any other way — things like protecting the environment, medical research and public education. However, many of these dollars also end up in the hands of corporations through federal contracts. In 2017, nine out of 10 of the top US federal contractors were primarily contracted under the Department of Defense.

Government contracts to corporations often act as a direct subsidy to economic inequality. The biggest federal contractor, Lockheed Martin, receives the vast majority of its revenues from federal tax revenues and rewarded its CEO with a $ 20 million pay package. The average US taxpayer contributed $ 240 to Lockheed Martin in 2017. CEOs for the top five military contractors took home a combined $ 96 million in pay.

The Trump administration’s recent bombing of Syria prompted watchers to note the cost of weapons used in the strike at upward of $ 118 million.

Federal contractors still benefit from corporate tax cuts under the Trump plan. Military contractor Raytheon noted that it plans to use its tax cuts in much the same way as other corporations: by “returning capital to shareholders through share buy backs and dividends.” The difference is that not all corporations using the tax cuts to reward shareholders make their money from the federal government.

Military contractors like Lockheed Martin and Raytheon also sell their weapons and military aircraft to foreign governments, and still take advantage of the offshoring of profits. The tax plan provides a feedback loop of reinforcement for these bad behaviors: Analysts have noted that repatriated profits under the offshoring tax loophole might themselves be used for shareholder dividends and share buybacks.

Even as federal contractors benefit from tax cuts, the biggest contractors also stand to benefit from another Trump signature policy: the policy of expanding the military and war. The military budget is set at $ 716 billion for 2019, the highest in more than a generation. Roughly half of that is likely to end up in with the Pentagon’s corporate contractors. And the Trump administration’s recent bombing of Syria prompted watchers to note the cost of weapons used in the strike at upward of $ 118 million.

Even as the job and wage improvement promises of the Trump tax plan go up in smoke, federal spending on everything else — from education, to veterans, to cancer research — lags behind.

Out of every income tax dollar, 23 cents goes to the military, and 11 cents of that go to military contractors, but just 6 cents go toward benefits for veterans from all of our past and current wars.

A 10 percent cut in spending on military contractors would provide health insurance for 13 million children.

Military contractors are better funded than almost every function of government: Of every tax dollar we pay, three cents go to federal student aid for higher education; two cents go to food stamps, according to the National Priorities Project. Less than a penny goes to the Environmental Protection Agency, which President Trump has threatened with a 23 percent budget cut. The only public need on which we spend nearly as much as we spend on military contractors is health care.

That leaves a lot to individuals and to stretched city and state budgets to cover: education, housing and the environment are all distant seconds to corporate welfare when it comes to federal spending.

These choices have real consequences. A 10 percent cut in spending on military contractors would provide enough money to hire 395,000 elementary school teachers or provide health insurance for 13 million children.

The US tax system has provided a range of benefits to corporations, from low tax rates to loopholes, for decades. The Trump tax plan doubles down on this approach, lowering the corporate tax rate even further and rewarding corporations that made use of loopholes like offshoring profits.

This tax system is matched by federal spending choices that prioritize the military industrial complex, whose corporate members are a model of tax avoidance and corporate inequality, complete with taxpayer-funded high CEO pay.

Combined, these policies serve to shortchange domestic priorities, from job creation to education.