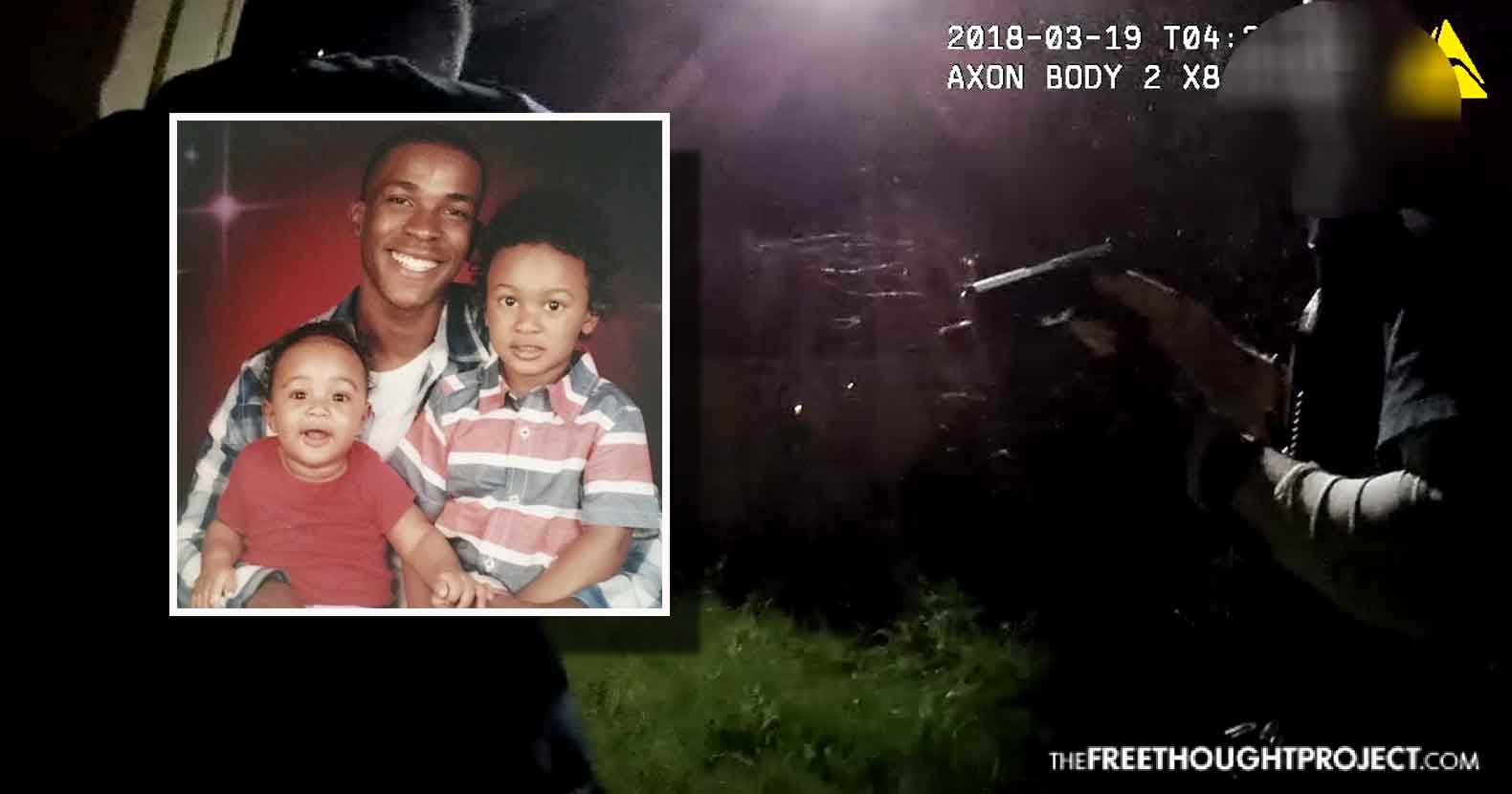 Sacramento, CA – As TFTP reported, last year, disturbing body camera footage was released from a police shooting that took the life of a father who was confronted in his grandparents’ backyard and then gunned down because officers claimed his phone was a gun. Now, after Sacramento Police Department officers Terrance Mercadal and Jared Robinet escaped any and all accountability, the taxpayers are held liable instead.

According to ABC 10, the city of Sacramento agreed to pay Clark’s two sons and their attorneys a total sum of $ 2.4 million, court documents show. Each child will get $ 893,113 after attorney’s fees.

Clark, 23, was shot and killed by two Sacramento Police officers around 9:30 p.m. on Sunday, March 18, 2018. While the department promised to release the body camera footage within 30 days, a flurry of attention on social media prompted an early release of videos that showed the shooting from a body camera worn by one of the officers, and from the helicopter that was circling above.

Police initially received a call about a suspect breaking into cars in the neighborhood and they dispatched multiple officers and a helicopter in response. The video from the helicopter begins with an operator claiming that the suspect has just broken a window and was attempting to try to get into a house.

The video shows a man jumping over a fence from one backyard to another and then walking up to a vehicle parked at the house and looking in the window. However, when the operator in the helicopter described his actions, he said that man was “running for the front yard” and then “looking into another car in between the fence and the front yard.”

The officers can then be seen approaching the backyard of the house where the man is, with their guns drawn. The man disappears from the view of the helicopter video, and within seconds, the operator yells “Shots fired! Shots fired!” as the officers shoot and kill a man standing on the back porch of the house.

What’s more, the infrared version of the chopper video appears to show Clark lay down on the ground and comply with the officers’ orders—before they dumped another dozen rounds into him.

The Body Cam footage began as the officers searched the dark neighborhood for the reported robbery suspect. When the officers entered the backyard of Clark’s grandparents’ house, they immediately saw him on the back porch and one officer yelled, “Show me your hands! Gun! Gun! Gun!”

Less than 10 seconds elapsed from the moment the officers saw Clark on the porch until the moment they opened fire and shot 20 rounds in his direction. The number of bullets fired alone is troubling given the fact that the officers were in a residential neighborhood, and other bystanders could easily have been caught in the gunfire.

The officers waited more than 5 minutes until after back-up arrived at the scene before making any attempt to check on Clark’s motionless body. Even when two officers arrived, they stayed several feet away and they must not have realized that Clark had been shot several times.

“Sir, can you move? Can you hear us?” a female officer yelled at Clark’s dead body.

When the officers finally approached Clark, his body was lying face down on the ground. As they moved his arm behind his back and placed his wrists into handcuffs, a phone can be seen lying on the ground under him.

The officers arriving at the scene questioned why Clark was shot and how many rounds were fired. The officer wearing the body camera claimed that they believed Clark was pointing a gun at them, and that he shot “about five rounds.”

However, investigators have confirmed that Clark was not armed with a gun. The only object found next to his body that had been in his hand was his phone.

While the footage released by the Sacramento Police Department does not show Clark attempting to break into any cars or damaging property, it does show that the two officers who killed him did so deliberately, and after approaching him in the dark, they wasted no time in firing an excessive number of rounds at him because they claimed his phone was a gun.

Sequita Thompson, Clark’s grandmother, told the Sacramento Bee that it was normal for Clark and other guests to enter the home through the backyard because “the front doorbell doesn’t work and she and her husband, who is in a wheelchair, have poor mobility.”

As the events unfolded outside, Thompson said she was near the window when the shooting happened, and as soon as she heard several consecutive gunshots, she dropped to the floor and crawled across the house to check on her husband and her 7-year-old granddaughter.

Both Thompson and her husband were not immediately aware that police were responsible for the gunfire—or who they were targeting—and they called 911 to report it. Officers came to the back of their house and asked to come inside and ask them questions.

Thompson complied and said it was not until she decided to get up and look out the window into her backyard that she realized her grandson had been killed. “I opened that curtain and he was dead,” she said. “I started screaming.”

Before he was killed, Stephen Clark was a loving father of two sons, ages 1 and 3, whose $ 900,000 each will never come close to replacing a father figure in their lives.. His girlfriend, Salena Manni, told ABC 10 that she believed Clark was “scared for his life” when he was confronted by police and that “he would never want to leave his kids.”

“I have to wake up every morning to my kids asking me, ‘Where’s Daddy? Let’s go get Daddy,’” Manni said. “‘Daddy’s always in our hearts forever. Don’t forget that.’”

Video Catches Cops Savagely Beat Innocent Man with a Flashlight, The Lie to Cover It Up