By Jacob G. Hornberger ​Suppose my neighbor acquired a bazooka and stored it in his home. He doesn’t say anything…. 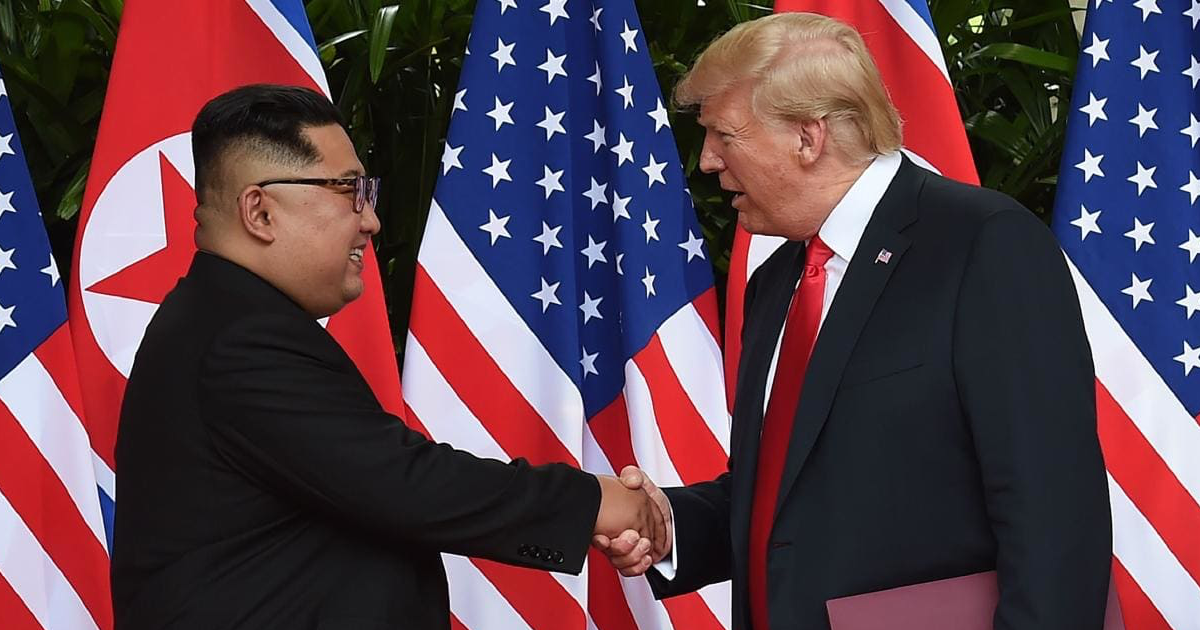 ​Suppose my neighbor acquired a bazooka and stored it in his home. He doesn’t say anything. He doesn’t threaten me with it. I ask him, “John, why have you acquired that bazooka?” He responds, “Just in case you decide to attack me and my family. If you do, we are going to defend ourselves by firing this bazooka at you.”

John responds, “Jacob, if you attack me, you might well prevail and destroy my home and kill my family and me. But rest assured: The minute you attack me, I’m going to fire back at you with my bazooka.”

All the neighbors come out to witness my stream of angry outbursts, insults, and threats. The local media comes out to report on the crisis.

At that point, I agree to a meeting with John. We sit down and we discuss the problem. I compliment him, and he promises that at some undefined point in the future, he will give up his bazooka. We go away from the meeting as good friends.

What happens then? Isn’t it obvious? I am peacemaker, a statesman, a candidate for the Nobel Peace Prize. Who cares that I am the one precipitated the crisis by demanding that John give up his bazooka? Who cares that I am the one who started the series of angry insults and threats between us? What matters is that I have shown courage and statesmanship by agreeing to sit down with John and make friends with him. Don’t I deserve a prize for that?

And that’s precisely where we are with President Trump and North Korea. The media has conveniently forgotten that it was Trump who started this entire brouhaha in the first place. North Korea was never threatening to attack the United States. It also wasn’t threatening to attack South Korea. Its position was very clear: Our nuclear weapons are not intended to start a war with the United States. Instead, we have them for one reason only: to deter the U.S. government, specifically the Pentagon and the CIA, from attacking North Korea or, in the event of an attack, to have them at our disposal as a way to defend ourselves.

In other words, North Korea’s position has always been the same as that of my hypothetical neighbor John.

At that point, Trump went ballistic (so to speak). No, he openly and publicly declared, you North Koreans have no right to defend yourself from a U.S. attack with nuclear weapons. You must dismantle your nuclear weapons immediately. If you persist in keeping these weapons for deterrence or defense, we will attack North Korea with the full fire and fury of our nuclear arsenal.

At that point, everyone got extremely anxious. Would Trump carry out his threats? Would there really be a nuclear war in Korea?

But what everyone forgot was that it was Trump who created the crisis. North Korea was never threatening anyone. They just had their nuclear weapons, which they had no intention of using unless the U.S. government attacked North Korea.

Trump ultimately settled down and suddenly accepted North Korea’s invitation to have a summit. At the summit, Trump became best friends with North Korea’s dictator, Kim Jong Un, who, like his father before him, has promised to “denuclearize” at some undefined point in the future. Trump has now ceased his threats to bring nuclear fire and fury to North Korea and now says that North Korea is no longer a nuclear threat to the United States.

So, where are we? We are back to where we were before Trump initiated his series of angry outbursts, insults, and threats against North Korea. North Korea still has its nuclear weapons and is promising to get rid of them sometime into the future, just like Kim’s father did. In any event, Trump is no longer concerned about them and says that Americans can now sleep soundly again.

And everyone is now hailing Trump for sitting down and meeting with the communist dictator. They’re saying that talking is better than war. What they are ignoring is that if Trump had never started his series of angry outburst, insults, and threats, there never would have been a crisis to resolve. We would have been here at this point back then — back before Trump initiated his angry outbursts, insults, and threats.

Despite the fact that North Korea is headed by a brutal communist regime, it is important to look at the situation from their perspective.

Now, before anyone accuses North Korea of being paranoid, let’s keep in mind that sometimes paranoid people really are followed and put under surveillance by the Pentagon and the CIA. (Ernest Hemingway comes to mind.) The fact is that the Pentagon and the CIA do specialize in regime-change operations. Iraq, Iran, Guatemala, Chile, Afghanistan, Panama, Libya, Syria, and Cuba, just to name a few targets of U.S. regime-change operations.

There are also people within the U.S. government who have openly expressed support for a military regime-change operation in North Korea. Trump’s national-security advisor John Bolton comes to mind.

And let’s not forget that U.S. national-security state officials have openly declared North Korea to have been part of an “axis of evil.” And we all know what the Pentagon and the CIA do to people and entities they consider to be evil.

Moreover, let’s not forget that regime change is the primary purpose of U.S. sanctions against North Korea.

The North Korean communist regime knows that it could never defeat the United States in a war. So, it acquired nuclear weapons to deter the Pentagon and the CIA from initiating a U.S. regime-change operation.

Along comes Trump and essentially says to the North Koreans, “Okay, fair enough. But you have my word. I’m not going to let the Pentagon and the CIA attack or invade North Korea. Therefore, you don’t need nuclear weapons any more. And you can trust me on this. And I’ll help you develop your beaches with condos. You’ll be rich, like me!”

Now, what do you do if you’re North Korea? Do you trust Trump to keep his word? Keep in mind that once you destroy your last nuke, that’s it. If you’re double-crossed and U.S. bombers are dropping their bombs on you, it’s too late. You can’t get your nukes back.

But let’s assume that the North Koreans decide that Trump can be trusted. Okay, but Trump is 72! He could suddenly become incapacitated owing to health issues. What then? Can the North Koreans trust President Pence to keep Trump’s word? Maybe.

But what about the 2020 presidential election? Suppose the Republican and Democratic nominees are John Bolton and Hillary Clinton. What then? Can the North Koreans count on them to keep Trump’s word? Well, we know that Trump didn’t keep Barack Obama’s word on the Iran nuclear deal. Is it that difficult to imagine either Clinton or Bolton smilingly saying about Kim, “We came, we saw, he died. Too bad he trusted Trump and got rid of his nukes.”

The question is: How can North Korea be reasonably assured that it doesn’t need to fear a Pentagon-CIA regime-change operation?

Let’s assume that Trump permanently cancels the war games between Pentagon, CIA, and South Korea. Let’s assume also that he immediately brings back all U.S. troops from South Korea.

Would that be enough to convince North Korea that there no longer is a threat of a U.S. regime-change operation? Possibly. It would certainly be more convincing. But the problem is that there is nothing to prevent the Pentagon and the CIA from flying bombers over North Korea and unleashing their fire and fury or attempting an assassination of Kim. They don’t need troops in South Korea to do that. They didn’t have troops in Iraq and Afghanistan before they brought about those regime changes.

There is only one way to guarantee North Korea that it no longer need be concerned about a U.S. regime-change operation: The restoration of a limited-government republic to our land, which necessarily means the dismantling of the national-security state apparatus that was grafted onto the federal government after World War II. Republics don’t engage in regime-change operations and, anyway, they lack the means to implement them.

In other words, no more military-industrial complex, no more military empire, no more Pentagon, no more CIA, and no more NSA. The return to a constitutionally limited-government republic, the type of government that the Framers intended for the American people.

Thus, if Americans want to restore a society of freedom, peace, prosperity, and harmony, it is essential that they begin thinking at a higher level and a deeper level. Sure, give Trump his Nobel for sitting down and talking with a communist dictator. But for lasting, positive change, both here at home and in the rest of the world, it is necessary to return our nation to its founding principles.

For more information, see my book The CIA, Terrorism, and the Cold War: The Evil of the National Security State.

The Monetary System Will Be Reformed, And Gold Will Be Called Upon