This March, Hungary’s authoritarian Prime Minister Viktor Orbán posted a photo of himself to his official Facebook page holding up a…

This March, Hungary’s authoritarian Prime Minister Viktor Orbán posted a photo of himself to his official Facebook page holding up a book, titled “The Strange Death of Europe: Immigration, Identity, Islam.” Orbán’s photo was of the book’s Hungarian translation, but author Douglas Murray, a British political commentator and journalist, wrote the volume in English. Since its release, the book has made considerable waves. Last summer, Murray was among a group of pop intellectuals collectively deemed to be members of the “Intellectual Dark Web” by the New York Times. Despite being a year old, his book continues to be cited by anti-immigrant hard-liners in the United States, as well as right-wing European politicians like Orbán.

The entire argument is helpfully summed up in the title: Europe is dying — being murdered, in fact — by hordes of Muslim immigrants.

If you’re curious what the book is about, the entire argument is helpfully summed up in the title. Europe is dying — being murdered, in fact — by hordes of Muslim immigrants, aided in their task by craven liberal politicians. As Murray describes it, insufficiently harsh border policies have opened the gates to migrants bent on committing no lesser crimes than mass rape and indiscriminate murder. Meanwhile, white Europeans, exhausted by their own history and driven into moral relativism by the decline of the Christian faith, are slowly being replaced by an implacably hostile and alien population of foreigners.

The “mass movement of peoples in Europe,” Murray writes, has led to “streets in the cold and rainy northern towns of Europe filled with people dressed for the foothills of Pakistan or the sandstorms of Arabia.” This is an early clue to the relentlessly paranoid tenor of the book: In South Asia or the Middle East — just as among the Western immigrant populations who hail from those places — many, if not most, people today dress in Western clothing, regardless of how appropriate it is for the climate.

Murray, though, is gravely alarmed by whatever foreign dress he does see. In his own hometown of London, according to a 2012 census he cites in the book, “only 44.9 percent of London residents now identified themselves as ‘white British.’” The fact that more than 80 percent of Britain is nonetheless white-skinned like him is apparently little comfort: Murray raises the specter of supporters of immigration purposely reducing the population of “white Britons” to 25 percent, 10 percent, or even zero percent in the city of London or, even more luridly, Britain as a whole.

The picture of Europe that Murray paints is nothing less than apocalyptic. Over 300 pages, he recounts a litany of crimes committed by immigrants, asylum-seekers, refugees, or people with European citizenship who happen to be minorities. Like far-right American publications that maintain running lists of crimes specifically committed by black people and Latino immigrants, Murray collapses all these cases together to give the impression of one gigantic, rolling crisis. Echoing President Donald Trump’s warnings about Latin American rapists flooding the United States from Mexico, Murray depicts a wave of migrants from Muslim-majority countries who are not simply fleeing violence in their homelands, but are on a mission to conquer, violate, and insult the people of Europe. 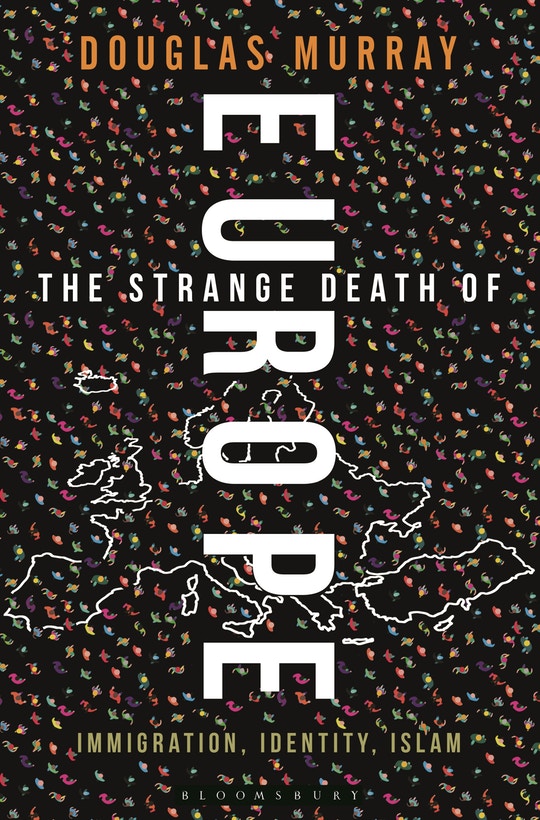 In case it needs to be said, some migrants, particularly young people, do commit crimes. There have been violent crimes involving migrants, including some who were refugees. But Murray’s narrative of lawlessness is blinkered to the point of being propaganda. While European Union-wide statistics are not readily available, it’s worth noting that Germany, the country that took the most refugees during the peak of the crisis, reported its lowest national crime rate this year since 1992. Similar decreases have been recorded in Italy, one of the front-line states for those arriving from across the Mediterranean. Across the continent, the wave of refugees has already crested, without the breakdown of law and order claimed by far-right polemicists.

It’s not even clear that there are so many migrants. According to United Nations data, between January 2014 and March 2018, roughly 1.8 million people crossed the Mediterranean Sea to try and enter the EU. This number — which has driven Murray to such angst that he has pronounced the “death of Europe” — amounts to less than one-third of 1 percent of the EU’s population. In the meantime, Turkey, Lebanon, Jordan, and Pakistan continue to quietly host millions of refugees, many of whom were driven from their homes as a result of wars of aggression supported by Murray, whose past books include forthright tomes like “Neoconservatism: Why We Need It.”

Even if no immigrant in Europe ever committed a crime, it seems like Murray would keep moving the goal posts against them anyway. In some of the most eye-opening portions of “The Strange Death of Europe,” he waxes nostalgic about medieval European warriors like Charles Martel who battled Muslim armies in the eighth century, drawing insidious connections between this ancient episode, among others, and the people he sees on the streets of Europe today. In other words, it’s not ultimately even about what immigrants and minorities do, it’s about who they are. On a trip to Paris, Murray laments that some of the subway lines are like “taking an underground train in an African city,” asserting contemptuously that most of the people are “going to low-paid service jobs or appear to be heading nowhere.”

I recently finished reading Murray’s book while I myself was on a subway in Paris. This was a strange experience in some respects, particularly since I’m technically one of the invaders from the “foothills of Pakistan” that the book raises the alarm about. It was also strange because Murray actually begins his argument by citing my own favorite book: “The World of Yesterday” by Stefan Zweig.

Zweig was an Austrian-Jewish writer who was driven from Europe by the rise of fascism during the mid-20th century. While Murray cites him to reinforce his case about the continent’s looming mortality, the actual threat that Zweig warned about in his writings was from the xenophobic parties of the European far right. Those people eventually did destroy Zweig’s world, forcing him into a life of forlorn exile. He killed himself in Brazil in 1942.

Rather than declaring the continent “dead,” it might be worth considering that every generation faces unique challenges for which they must find new solutions.

Europe faces real challenges today, with economic austerity, political dysfunction, and, yes, migration. Rather than declaring the continent “dead” — an extremist proclamation that can only generate extremist responses — it might be worth considering that every generation faces unique challenges for which they must find new solutions. The question is whether those solutions will be ones that they can feel at ease about later, or whether they will be a source of shame that plagues the consciences of their descendants.

In retrospect, it’s not so surprising that Orbán decided to promote Murray’s book on his Facebook page this spring. Not only does the book reinforce the Hungarian demagogue’s own ethnonationalist worldview, but Murray also actually writes about Orbán favorably while criticizing his nemesis, the liberal financier and supporter of migrants, George Soros.

A few weeks ago, a Soros-linked university was driven out of Hungary, despite protests by thousands of liberal Hungarians against its closure. As the far right rears its head on the continent once again, leaders like Orbán are once again gaining strength, buttressed by the writings of ideologues like Murray. As the storm clouds gather, the rest of us can only fight to ensure that such people don’t succeed in dragging Europe down the same road of regret that it traveled just a few short generations ago.