The Intercept’s Glen Greenwald, who said his visit to Russia was partially meant to combat a toxic McCarthyist environment in… 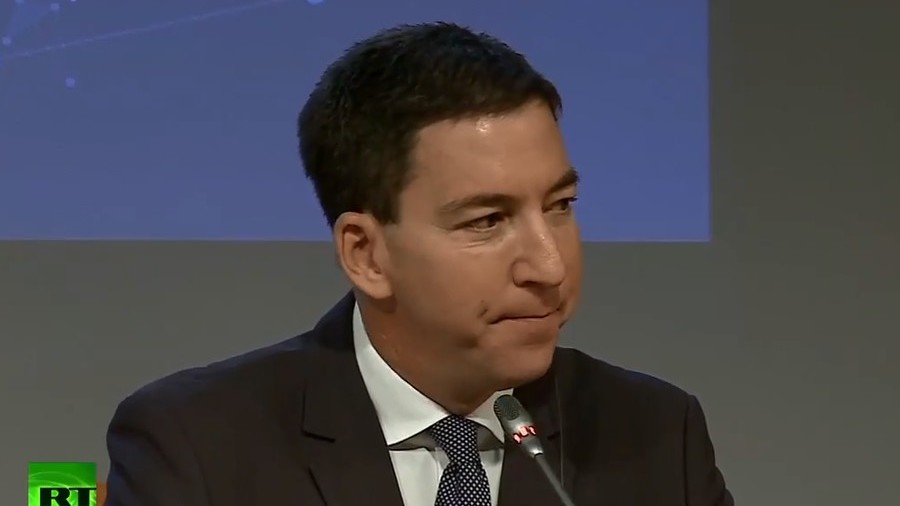 The Intercept’s Glen Greenwald, who said his visit to Russia was partially meant to combat a toxic McCarthyist environment in the US, has found himself on the receiving end of just such a hysteria.

Mainstream media pundits and ‘Russiagaters’ have been up in arms after Greenwald’s trip to Russia, which included taking part in an expert panel on “fake news” and interviews with several media outlets, including RT. Now he is being accused of being a Russian agent, and some go as far as calling him an open supporter of the Kremlin policies, which he is not.

One such attack came from Malcolm Nance, a former US intelligence officer who is a regular fixture of MSNBC, offering his insight on Russia. He also wrote a book called ‘The Plot to Destroy Democracy: How Putin and His Spies Are Undermining America and Dismantling the West.’

Nance described Greenwald’s visit to Russia as reporting to “his masters in Moscow to help set the record straight about how misunderstood Russia is” and called him “an agent of Trump & Moscow” who helped NSA whistleblower Edward Snowden “defect.”

👇🏽 READ: Glen Greenwald shows his true colors as an agent of Trump & Moscow. now we know why he helped Snowden defect, covers for Wikileaks attack on Democracy & shills for Fox News. He’s deep in the Kremlin pocket. https://t.co/GXW07PmXFo

Considering Greenwald’s long-standing beef with Nance over the latter falsely claiming that Jill Stein of the Green Party had her own show on RT, it’s hardly surprising that The Intercept soon published an article about how MSNBC chooses to ignore demonstrable lies by people to whom it gives air time, as long as it serves the channel’s political agenda.

What is this, faith-based reporting? This isn’t a matter of trust. If you accuse someone of a serious transgression, you have to have some evidence for it. Those standards exist to protect everyone. https://t.co/PlD9gUhubq

Confronted by the reaction, Nance said he was honored by the attention and compared Greenwald to Louise Mensch, who is ironically among the more unhinged members of the #Resistance movement in the US that tends to perceive pretty much everyone as a possible agent of the Kremlin.

HAY YALL: I got GREENWALDED: “The act of misrepresenting a more intelligent person's superior argument, typically on social media in the form of poorly written material under the guise of journalism.” It only took him 2 years for @ggreenwald to go full Louise Mensch! HONORED 😂 https://t.co/a5WjUGSA71

Nance, of course, did not bother to provide any evidence of his accusations against Greenwald. And neither did Polygraph, a supposedly fact-checking website produced by the US government-funded outlets VoA/RFE, when it claimed Greenwald was a supporter of the Russian government.

A reporter who never trusts "any government" & an LGBT activist voicing support for the government of Russia that criminalized “public expression of non-traditional sexual relations, manifested in a public demonstration of personal perverted sexual preferences in public places.” pic.twitter.com/ZiPN6mfxjQ

Among others who found the visit to be sinister and in appropriate was Neera Tanden of the Center for American Progress. Tanden’s attempt to take the moral high ground was quickly undercut by comments, which pointed out that her think tank didn’t hesitate to take sponsorship money from the UAE, a nation accused of running prisons in Yemen where the brutal mistreatment of inmates takes place.

Um. One of the largest contributors to your think tank is the *chuckles* democracy-loving United Arab Emirates. pic.twitter.com/vYTzOFCuD4

With critics like this, Greenwald’s argument that the entire anti-Russian hysteria in the US has become quasi-religious has gained more credibility. Nance and Polygraph both gave links to RT articles, presumably as proof of their allegations, but any honest person who bothered to read the text would see nothing of the kind.

Since the Obama admin repealed the Smith-Mundt Act forbidding domestic propaganda, US funded ops like Bellingcat and Polygraph have surfaced and are licensed to attack American critics of US foreign policy with reckless abandon. https://t.co/7Ngm5eCPL6