Operation Faithful Patriot, the Trump administration’s military campaign to secure the midterm elections by deploying troops to the southern border,… 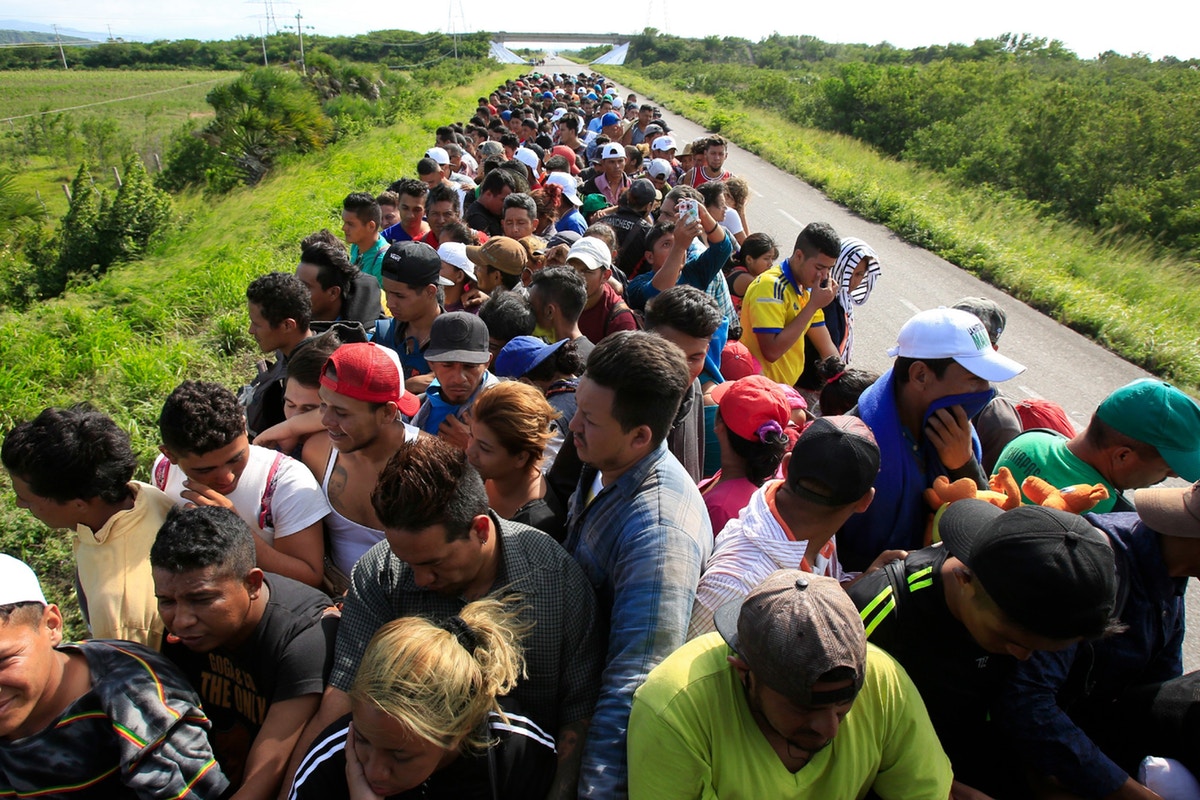 Operation Faithful Patriot, the Trump administration’s military campaign to secure the midterm elections by deploying troops to the southern border, is less than a week old, and it already features some of the same core failings that defined its post-9/11 predecessors. Like the invasion of Iraq, Faithful Patriot is a right-wing political project carried out through military means against a demonized nonwhite population, one that haunts the fevered dreams of many Republican voters. And, as some observers have already noted, Faithful Patriot, like the ongoing war in Afghanistan, does not appear to feature a clear end game.

The similarities don’t end there though. Speaking to reporters Tuesday, Gen. Terrence J. O’Shaughnessy, head of the U.S. military’s Northern Command, revealed that Operation Faithful Patriot is running on bad intelligence, which the decorated military commander is apparently comfortable regurgitating to the American public and the four-star general’s press shop is seemingly unable to account for.

The comments in question have to do with what O’Shaughnessy termed “the true nature” of the caravan itself. “We understand this caravan is different than what we’ve seen in the past,” the general told reporters, noting that this analysis was drawn from coordination with Customs and Border Protection, the Department of Homeland Security component overseeing the ports, and the Border Patrol. “That is one of the things that as we work and train together with CBP to understand the true nature of this caravan and the ultimate effect of that makeup of the caravan,” O’Shaughnessy went on to say. “I think what we have seen is we’ve seen clearly an organization at a higher level than we’ve seen before.”

While the general’s line on the caravan — that it is a more organized operation than others in previous years — appears to be the line the enforcers of Operation Faithful Patriot have settled on to justify its existence, O’Shaughnessy’s press office at NORTHCOM did not provide evidence to support his assertion, despite repeated requests.

It is true that this caravan is different, but according to longtime Latin America experts and reporters on the ground, it is different for reasons that are the exact opposite of the justification coming from the general leading Faithful Patriot.

In years past, advocacy groups have organized caravans through Mexico both as a form of protection for migrants, particularly those traveling from Central America, and as a demonstration highlighting the lack of institutional safeguards that defines migration through the region. One such caravan, organized by the group Pueblos Sin Fronteras, drew President Donald Trump’s ire earlier this year, prompting the deployment of the National Guard to the southern border. That operation, known as Guardian Support, which includes some 2,000 National Guard personnel, is ongoing.

The current caravan, particularly at its peak, is indeed larger than past caravans, said Adam Isacson, director for defense oversight at the Washington Office on Latin America, or WOLA, but this one stands apart because it is less organized, not more so. “It’s completely improvised,” Isacson said. “There’s nobody there to make sure that people have access to emergency services, that they’re hydrated, that at some point along the line, they’re going to get decent legal advice so they don’t just walk into the United States completely blind. Pueblos Sin Fronteras at least did that, and they kept things more orderly.”

“It’s a much more organic thing,” Isacson noted, and while it may be large, “there’s nothing else there that shows that this is orchestrated.” He added, “I almost wish it were more orchestrated. It would be a much more orderly process.”

The caravan making the news remains deep in Mexico. Whether many of its participants will make it to the U.S. is an open question. If they do, it will likely be weeks from now. If those who do make it to the border wish to apply for asylum, it is their right under domestic and international law to do so — although there have been rumors of a potential executive order coming aimed at circumventing that right, and just this week, the president hinted at the construction of vast tent detention camps in response to the caravan’s arrival.

In its darkest form, the notion that the caravan has been orchestrated and organized by outside forces has been seized upon by right-wing extremists, white nationalists, and other bigots who describe its existence as evidence of an “invasion.” Trump administration officials up to the president himself have fanned the flames of racist paranoia, with the commander-in-chief baselessly claiming that the caravan was infiltrated by “unknown Middle Easterners.” It was that same conspiracy theory that Robert Bowers shared on right-wing social media before walking into a Pittsburgh synagogue and carrying out the deadliest anti-Semitic attack in U.S. history.

As Isacson and numerous journalists on the road with the caravan have noted, this particular movement of people is more organic than its predecessors, less organized, and more of an exodus of desperate families and individuals than a coordinated demonstration.

In a piece for the Daily Beast earlier this month, Jeff Ernst and Sarah Kinosian, journalists based in the region, provided a detailed account of how the caravan began in Tegucigalpa, historically one of the deadliest cities in the Western hemisphere, with a group of less than 200 people, and steadily snowballed into a group of several thousand. While the Honduran government sought to pin the creation of the caravan on Bartolo Fuentes, an advocate for migrants, the piece noted that coverage by “the country’s most-watched cable news channel” played a critical role in attracting attention to the small groups who were planning a march north on their own. Fuentes has maintained that the caravan is a reflection of the dire conditions in Honduras, and the failure on the part of the government to provide for its people.

There are clear limits in comparing Operation Faithful Patriot to the wars in Iraq and Afghanistan. The post-9/11 wars killed tens of thousands of people, displaced millions, and destabilized entire regions of the world. At the same time, however, decades of U.S. intervention in Central America and a colossally violent, U.S.-backed drug war in Mexico have yielded a higher death toll, while gutting the institutions ostensibly designed to serve and protect civilian populations in some of the same ways that a conventional war would. These factors, alongside entrenched poverty, lack of jobs, and the effects of climate change on rural communities, have combined to make migration what it is today. While unauthorized border crossings are the lowest they have been in four decades, the frequently seasonal Mexican migrant of years past has been replaced by Central American families seeking refuge in the U.S.

In a press conference alongside O’Shaughnessy on Monday, CBP Commissioner Kevin McAleenan stressed that Faithful Patriot is a law enforcement operation with military support. At the same time, the commissioner himself blurred the lines between military and law enforcement work, describing the tactical Border Patrol teams that will lead the effort as “troops.” A picture of what this effort would look like has begun to emerge. Between the press conferences Monday and Tuesday, the Pentagon and DHS have said the first wave of Faithful Patriot will include some 5,200 active duty troops, more than the U.S. currently has deployed in Iraq and Syria. Their operations will be limited, and they are unlikely to have direct contact with migrants. The units that are normally armed will remain armed on the border. Late Wednesday, reports surfaced that the president was considering upping the total number of troops deployed on the border to 15,000.

The blurring of law enforcement and military activity has been a multigenerational feature of the militarization of the U.S.-Mexico border, giving rise to a complex and frequently exploitative smuggling network on the southern side. According to some counts, as many 120,000 Central Americans have disappeared traveling north in recent years — this on top of a drug war that, by conservative estimates, has killed more people than the wars in Iraq and Afghanistan combined. Caravans are meant to provide safety in numbers as migrants navigate this gauntlet. Since the first caravan began, others have cropped up across the region, suggesting that the rational decision to seek safety in numbers, with or without the help of an advocacy organization, could be catching on.

Even so, U.S. border security officials don’t seem to understand why migrants would join a caravan. “There’s no benefit to be part of a large group,” McAleenan said at Monday’s press conference.

There are reasons to believe that even within the halls of government, there is a recognition that Operation Faithful Patriot is a ridiculous boondoggle of historic proportions. Since its inception, Newsweek has published a series of reports based on leaked Pentagon documents showing that prior to the launch of the operation, the Trump administration was informed that “only a small percentage” of the migrants making their way north were expected to reach the border, and that the whole thing is likely to cost around $ 50 million. “I see it as a political stunt and a waste of military resources and waste of tax dollars,” R. Gil Kerlikowske, CBP commissioner from 2014 to 2017, told the Associated Press. “To use active-duty military and put them in that role, I think is a huge mistake. I see it as nothing more than pandering to the midterm elections by the president.”

While it is easy to brush aside Operation Faithful Patriot as merely political theater — because it certainly is that — the international effort to stop a group of families has real consequences on the ground. Under pressure from the Trump White House, the Mexican government has stepped up its migrant interdiction efforts. On Monday, a Mexican government crackdown on the Guatemalan border, which included a helicopter hovering directly above parents and children attempting to cross a fast-moving river, cost one man his life and left dozens of others injured.

The Caravans are made up of some very tough fighters and people. Fought back hard and viciously against Mexico at Northern Border before breaking through. Mexican soldiers hurt, were unable, or unwilling to stop Caravan. Should stop them before they reach our Border, but won’t!

Our military is being mobilized at the Southern Border. Many more troops coming. We will NOT let these Caravans, which are also made up of some very bad thugs and gang members, into the U.S. Our Border is sacred, must come in legally. TURN AROUND!

Such fearful rhetoric might play well with the president’s base. But for anybody whose brain has not been sizzled by Trump’s white nationalist talking points, it can only serve as proof of what Operation Faithful Patriot really is — the deployment of the most powerful military in the world against refugee families in order to stoke racist fears for political gain.