Mideast Discourse — Turkey increased its military invasion of Syria last month to prevent the Syrian Arab Army (SAA) from liberating Idlib province from the occupation of terrorists, who are supported by Turkey and had been supported by the US before 2017 when President Trump cut off their funding through the CIA.

The invasion of thousands of troops has been disastrous for Turkey since 58 soldiers were killed, including 33 in a recent airstrike.

The SAA is the only Syrian national armed forces, and are backed by Syrian and Russian air forces, while their current military mission is to liberate the last territory held by the Al Qaeda affiliate, Hay’at Tahrir al-sham, formerly called Jibhat al Nusra.

Turkey shot down a Syrian jet on Tuesday over Idlib, which brought Turkey closer to a direct conflict with Russia, even though they have shared interests outside of Syria.  Previously, Turkey had shot down 2 additional Syrian jets, while the Turkish lost over 10 military-grade drones. 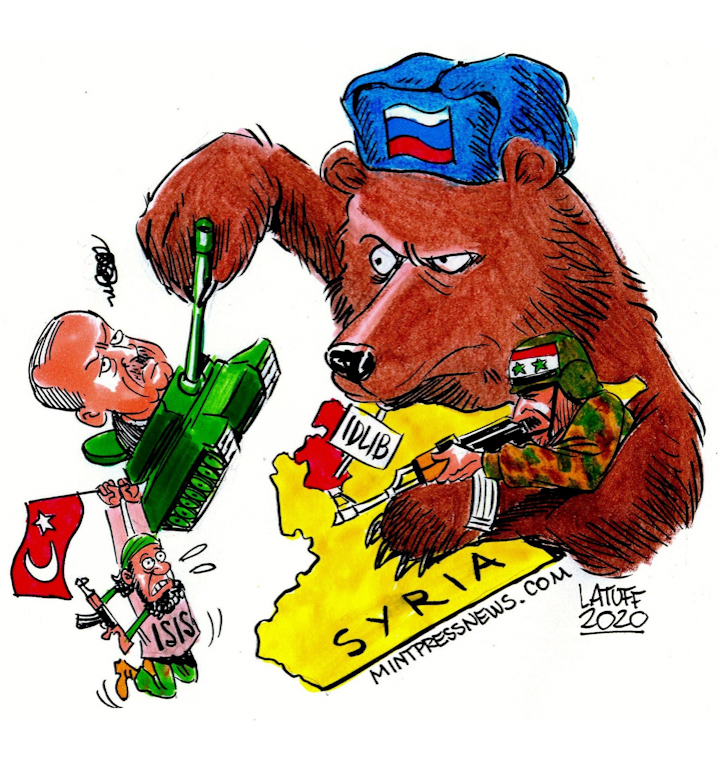 Turkish President Erdogan has called on the US and NATO for military assistance in Idlib, but both have refused to assist him propping-up Al Qaeda in Idlib.

The Turkish parliament erupted into a fist-fight on Wednesday as the AK party of Erdogan clashed with opposition parties concerned about the increasing loss of Turkish lives in Idlib.  The AK party is a Muslim Brotherhood party that shares the same political ideology as Al Qaeda, hoping to create an Islamic state in Idlib.  Even though the AK Party is the ruling party, modern Turkey was founded on secular values, and the support of extremists in Idlib has caused the country to be divided.

The fighting in Idlib has driven nearly a million people from homes that are not their own, as they were squatters.  These civilians are the wives, children and elderly relatives of the terrorists. The original homeowners of Idlib left years ago, fleeing from the terrorists.

Russia’s role in the global war on terror

In September 2015 Russia was formally requested to come to the military aid of Syria in the global fight on terrorism. An agreement was made between Turkey and Russia in 2018 in Sochi, and Turkey had vowed to remove all Al Qaeda terrorists and to safely separate the unarmed civilians from fighters.

On Wednesday, Russia’s Defense Ministry said Turkey had violated earlier negotiated agreements with Moscow, accusing Ankara of providing direct military aid to terrorist groups in Idlib who routinely fire on Russia’s main base in the region.

President Putin’s message to Erdogan has always been simple: Stop supporting the Al Qaeda terrorists in Idlib, who are banned by the UN, the US and the EU, and leave Syria.

Yesterday, Rossiya-24 channel aired an interview with President Assad.  “I’ve said many times that Idlib, from a military point of view, is a stepping stone, and they put all their forces to stop its liberation so we can’t proceed to the east,” Assad said, accusing Turkey, the US and NATO of trying to stop Syria’s military progress.

The SAA recaptured the strategic town of Saraqeb in Idlib on Monday, and  Russia’s defense ministry said it has deployed military police there “to ensure the safety and unhindered movement of vehicles and civilians along the M4 and M5 highways”.

US Ambassadors in Idlib

US Ambassador James Jeffrey, a special representative for Syria, and US Ambassador to the UN Kelly Craft, both visited the border at Idlib on Tuesday in a show of support for Turkey and the terrorists. On February 5 Ambassador Jeffrey had said he was very concerned about Idlib because of past chemical attacks there and acknowledged about 10,000 Al Qaeda terrorists were present. He failed to acknowledge investigative reports which point to the terrorists as the source of chemical attacks in the past and called on the Pentagon to establish a no-fly zone, apparently disregarding the fact that would entail a full US invasion of Syria and confrontation with Russia. Jeffrey also requested the US to deploy Patriot batteries to Turkey, a request which was vigorously denied by the Department of Defense, who are angry at Turkey for choosing the Russian S-400 over the American equivalent.

Ambassador Kelly Craft called for an immediate ceasefire in Idlib and urged Moscow to ground its jets. “As President Trump has made clear, the [Bashar] Assad regime, Russia, and Iran must halt their offensive before more innocent civilians are killed and displaced,” Craft said in a statement. “Humanitarian aid is only a response, but the solution is an immediate ceasefire,” Craft told reporters on the border.

Will Trump step in to save Erdogan?

President Donald Trump had stated his plan to reduce the US role in the Middle East, and instead to allow Russia to deal with the Syrian crisis, but aides have pressured him to back-track.

Even though Ambassador Jeffrey wants the US to send military equipment to Turkey, the office of the Secretary of Defense is refusing, seeing that as reckless and unproductive.

Kelly Craft and James Jeffrey met on Tuesday at Idlib’s border with Syrian NGO representatives and the ‘White Helmets’, while pledging $ 108 million in aid for the Syrian people.  However, this generous aid helps only those in the small province of Idlib. This marks the first time the Trump administration has let US aid flow into Syria since the White House refused to allow assistance approved by Congress to be appropriated last year. Craft announced the aid package, and said it was for “the people of Syria in response to the ongoing crisis caused by Assad regime, Russian, and Iranian forces”.  She never mentioned the poor and hungry residents of Aleppo, Homs, Latakia, and Damascus, who are suffering from the US-EU sanctions which prevent work, industry, and rebuilding, and will never receive any of the US aid.

The UN is increasing assistance to Idlib and will double the number of trucks it sends across the border to 100 each day according to Mark Lowcock, the United Nations humanitarian affairs coordinator.

The UN and all the other humanitarian aid agencies are enabling the occupation of Idlib by Al Qaeda to continue. These groups keep the terrorists and their families well cared for, and they never have to face defeat or expulsion.  Turkey and the international community are containing the terrorists in Idlib, without acknowledging their role as an enabler of human suffering of innocent children who are victims of their parent’s Radical Islamic political ideology, which places their goal to establish an Islamic state in Idlib above the health and safety of their children.

On February 3 the Russian reconciliation’s hotline received a tip-off from 2 residents of Idlib about a planned chemical attack by the terrorists, utilizing their support group, ‘White Helmets’, 15 of whom arrived in Idlib on February 1.  Mahi al-Din al-Am, of the Hay’at Tahrir al-Sham, was involved with the staged chemical attack in 2017 at Khan Shaykoun and was assembling a crowd of 200 people in Maaret al-Artik to be used in a new attack.  Surveillance had observed about 400 liters of a chemical solution have been delivered by ‘White Helmets’ activists in two pickup trucks.  The plan has been copied many times in Syria, always when the terrorists are about to be defeated, they pull out the ‘chemical card’ to use, banking on the US to react to a believable video production with a military strike against Syrian government facilities.

According to the UN Human Rights Council’s special independent panel for Syria, Hay’at Tahrir al-Sham, backed and armed by Turkey are accused of war crimes, including extrajudicial killings, pillaging and have conducted war crimes against the local civilian population.

Presidents Putin and Erdoğan met in Moscow yesterday, in a last-ditch effort to strike a deal over Idlib. Erdogan wanted the SAA to retreat to previous positions and evacuate their newly held territory. He didn’t get his deal, instead, Putin won the day by keeping all SAA gains, and a promise from Turkey to leave the Latakia-Aleppo highway and the Aleppo-Damascus highway unmolested and safe for transit to and from the city of industry, Aleppo. The ceasefire in Idlib is expected to hold if Erdogan can command his Al Qaeda forces.  Some experts expect Erdogan will pull back into Turkey while moving the terrorists over to Libya, where he is also fighting a Muslim Brotherhood battle.  The next crop of olives in Idlib will be set to harvest in September. The question is: will the owners of those trees be picking them once more after so many years absent, or will the squatters still be there?

Steven Sahouni is an independent Syrian political analyst and writer based in Lebanon; he has been covering the Syrian crisis since it’s onset in 2011 and has published several articles in numerous media outlets. He is regularly interviewed by US, Canadian and German media.

Police Budgets, Austerity, and Tax Cuts for the Rich Are Colliding in Democratic States and Cities