A development in Rio Vista, Calif., a town that struggled on the edge of bankruptcy after the bust in the… 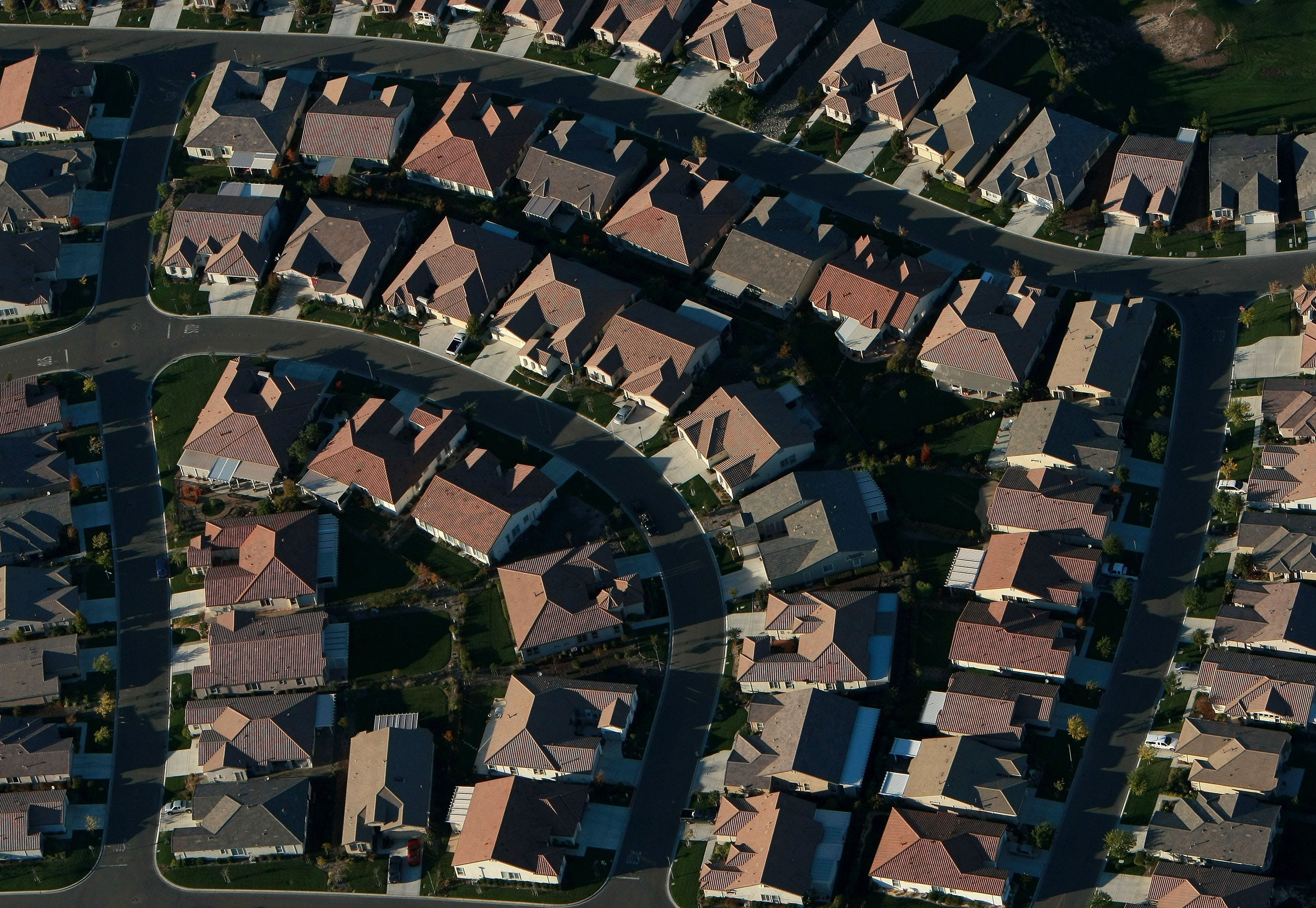 A development in Rio Vista, Calif., a town that struggled on the edge of bankruptcy after the bust in the housing market, on Nov. 20, 2008.

Since the 2008 meltdown, there’s been an ongoing effort to revise history and write Wall Street out of the financial crisis. The latest in this narrative is a new working paper, published by the Federal Reserve Bank of Philadelphia, which argues that the real criminals were, after all, those house-flipping exotic dancers made famous by Michael Lewis’s book and subsequent movie “The Big Short.”

The new study zeroes in on what its authors call “fraudulent investors”: people who got mortgages for investment homes in which they never intended to live, despite claiming that they would. Pinning the blame for the mortgage crisis on the dancers who agreed to take the money being given to them by the banks would be similar to faulting hoodwinked students for taking out massive loans from fraudulent for-profit colleges.

During the recession, conservatives latched onto the narrative that the crisis was caused by prospective homeowners’ greed, implying — and often outright stating — that the crisis resulted from the bad decisions of lower-income, largely minority families. In a 2009 congressional oversight report, then-Rep. Jeb Hensarling, R-Texas, blamed, among other reasons for the crisis, people who “simply made bad choices … and overestimated their readiness for homeownership.” He added these borrowers to his list of others, including those who commit mortgage fraud. While in Congress, Hensarling collected thousands of dollars from the payday lending industry around the time he was expected to act on policies affecting the industry, vocally criticized the Consumer Finance Protection Bureau, and crusaded for years to deregulate Wall Street after the crash. He is now an executive at banking giant UBS, while many of his former staff have moved to the CFPB, where they have set about dismantling it.

The working paper, which comes with a disclosure saying it doesn’t represent the opinion of the Philadelphia Fed, complements other research indicating that the “subprime mortgage crisis” is a myth. But it doesn’t go all the way to citing the role of Wall Street, which is convenient for politicians and regulators uninterested in policing those banks. Indeed, if the cause of the crisis was greed and fraud, there are several happy conclusions Hensarling can draw from that analysis. As he argued at the time, such borrowers were “much less sympathetic in the eyes of many,” meaning that the government has no responsibility to help those hit by the crisis. “Attempting to develop a government-subsidized foreclosure mitigation plan to assist [these borrowers] will inevitably raise significant moral hazard questions,” Hensarling argued in the 2009 report.

It also means that the law enforcement and regulatory response should focus on the borrowers, not the lenders on Wall Street or their brokers. Indeed, perhaps the most high-profile prosecution of the mortgage crisis was not of a bank CEO, but of Joe and Teresa Giudice, stars of the reality TV series “Real Housewives of New Jersey.” Both were sentenced to prison for mortgage fraud, caught with paperwork discrepancies on investment properties, and Joe Giudice, who was born in Italy, was deported, though not before spending time in solitary confinement in Immigration and Customs Enforcement custody. (“It was a terrible experience; I don’t wish that on anybody,” he said.)

During the recession, conservatives latched onto the narrative that the crisis was caused by prospective homeowners’ greed.

While the conservative response to the crisis was to blame black and brown homeowners, the more sophisticated academic response extends the blame more broadly to other borrowers. The new paper, authored by Ronel Elul, Aaron Payne, and Sebastian Tilson, studied the pervasiveness of what it called owner-occupancy fraud — that is, borrowers who applied for home purchase loans as owner-occupants despite no evidence of them subsequently occupying the home. Fraudulent investors defaulted on their mortgage at a nearly 40 percent higher rate than owner-occupants, second-homeowners, and declared investors (those who identified that they were applying for a home purchase loan as an investment property). The paper does not examine whether brokers advised the loan applicant how to fill out the form, but reporting from the time indicates that it was nearly always brokers who guided borrowers through the process. If there was fraud, in other words, it was directed by the brokers working on behalf of lenders.

“Despite making up only 5 percent of the borrower populations,” the study says, fraudulent investors “constitute one-sixth of the dollar share of defaulted loans for originations” from 2005 to 2007.

Lenders consider investment properties to carry greater risk. If a home is one’s primary residence, there is more incentive to pay the mortgage payment and avoid delinquency. In an economic downturn, there is less incentive to wait out the market and keep a home if the borrower does not occupy it. Consequently, lenders apply higher interest rates and require more cash up front than they do for owner-occupied homes. Applying as an owner-occupier allowed fraudulent investors to save these costs, providing them with interest rates that were “35 basis points lower, on average, than otherwise similar declared investors,” the study argues. (Depending on the size of the mortgage, the difference could mean a few hundred dollars per month or less.)

The paper argues that delinquencies that came from these loans were strategic and not from fraudulent investors struggling to make payments. They defaulted on these loans despite using significantly less of their available credit than other types of home borrowers, indicating that they were, in fact, able to manage their credit. But as the economy collapsed, renting those properties to cover the mortgage became significantly more difficult, and many of the owners, undoubtedly, also lost their own jobs, rendering the fact that they had successfully managed credit before then far less relevant. As the value of the homes plummeted, the possibility of refinancing the mortgage would also disappear. Default may have been a choice, but it was often the only choice.

The new paper found that adding these “fraudulent investors” to the investor pool increased the share of investors comprising the mortgage borrowers in this period to 50 percent — feeding the kind of surging demand Wall Street had created. This fraud, the paper states, was “widespread,” including in the large government-sponsored enterprise market led by the Federal Home Loan Mortgage Corporation (Freddie Mac) and the Federal National Mortgage Association (Fannie Mae).

Lower-income borrowers and black and Latino borrowers — including those who are upper-income — were targeted for subprime loans and people of color have struggled most to recover from the Great Recession. They have also endured most of the blame. In 2006, at the height of the boom, black and Hispanic families making more than $ 200,000 a year were more likely on average to be given a subprime loan than a white family making less than $ 30,000 a year. Black and Latino households were also more likely to end this period underwater.

While recognizing that these subprime borrowers were not the crisis’s primary drivers, recent studies like those published by Philadelphia’s Fed nevertheless blame borrowers and not the actors who created the conditions and set the terms for such transactions. Wall Street banks — whose insatiable demand for loan products it could slice up, securitize, slap a AAA rating on, and sell to pension funds — had created an industry of brokers ready to produce that supply by any means of fraud necessary.

Podcast: Vanessa Beeley Unpacks the Idlib Crisis and the Fight for Syria’s Oil, Gas and Water