Turner is a quaint, conservative town on the outskirts of Salem, Oregon. It’s a village that, by a margin of…

Turner is a quaint, conservative town on the outskirts of Salem, Oregon. It’s a village that, by a margin of two to one, supported Donald Trump over Hillary Clinton in 2016. In 2014, when a referendum on legalizing marijuana throughout Oregon came before the people of the town, they rejected it handily, with 57 percent voting “no.”

It passed statewide anyway, and in 2016 the people of Turner were again asked to vote on weed. This time the question was whether to allow recreational marijuana businesses in their community. To nobody’s surprise, they voted overwhelmingly — 63 percent — to prohibit the businesses in the unincorporated parts of their county.  But to everybody’s surprise, this time, the town voted 51 percent in favor of allowing pot businesses within the city limits. “We were actually shocked,” Mayor Gary Tiffin told me.

The town’s collective spit-take was well-founded. They had screwed up. An in-depth analysis of all “local option” marijuana votes in Oregon persuasively suggests that Turner legalized marijuana businesses by mistake, as the result of two confusingly worded questions appearing at the bottom of a ballot.

The saga of marijuana in Turner, Oregon, is a prime example of both the benefits and limits of direct democracy.

The process started in 2014. At the time, despite strong public support for marijuana legalization, local politicians in Oregon — like in the rest of the country — were reluctant to embrace the reform. So, organizations used ballot initiatives to bypass state legislators and put the issue directly to the public. On the macro level, the system worked as intended: The voters got what they wanted, even when their representatives refused to represent them.

After the public approved Measure 91 in Oregon, legalizing marijuana across the state, the legislature enacted a new rule for local regulation, a compromise of sorts. In most places, if a city or county wanted to locally prohibit recreational marijuana businesses, they needed to put the ban on the next general election ballot. The problem in Turner was that people don’t always pay close attention to questions on local issues that appear near the bottom of their ballots.

As a result of the legislature’s modification, six counties and 54 cities in Oregon voted on local marijuana bans, creating a large data set to study. The results from all these local elections show that recreational marijuana doesn’t seem to suffer from a “NIMBY,”  or “not in my backyard,” problem, nor does it benefit from a “YIMBY,” or “yes in my backyard,” mentality. Besides a few localities, which had unusual results due to unique circumstances, for the most part, how communities voted on statewide marijuana legalization, in 2014, matched very closely with how they voted in 2016, on local marijuana business bans. Voters in Oregon basically feel the same way about legalization in theory as they do in practice within their own communities. This is important to know moving forward, since politicians will sometimes oppose ideas that poll well in general, because they believe their voters won’t really support those same ideas being implemented near them. (Wind farms, compost centers, and other popular, environmentally beneficial projects are often opposed in practice by people who support them in general.) 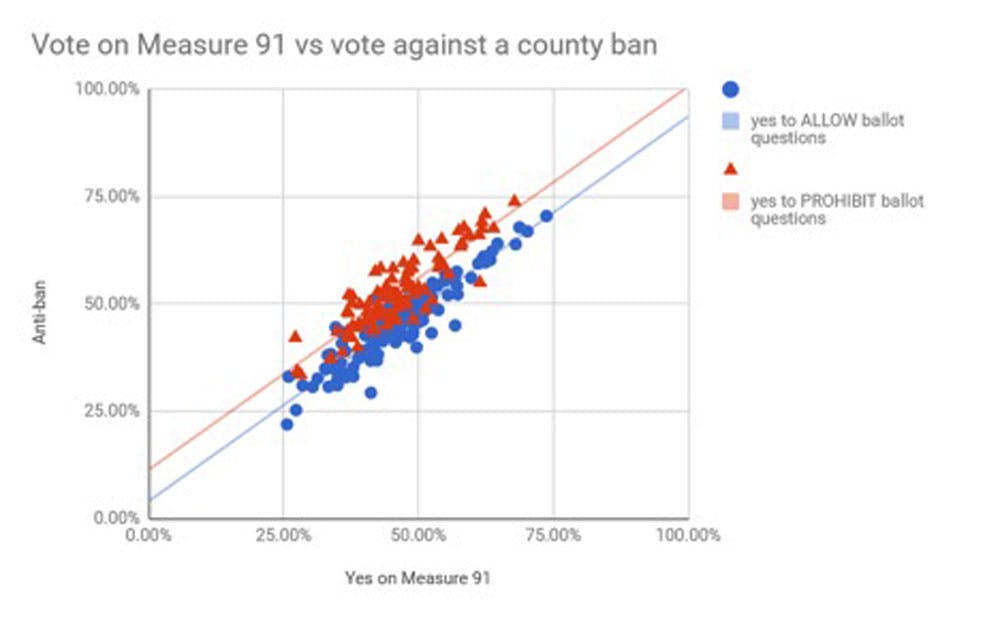 Where the local ballot question really made a big difference, though, was in a small number of cities in which people had to first vote on whether or not to ban marijuana businesses in the unincorporated parts of their county. Then, farther down the ballot, they had to answer a question about whether to ban them in their city.</span>

When county ban and city ban questions were phrased the same way, how precincts voted on the two questions was nearly identical. But in a few cities, like Turner, residents needed to vote “no” if they wanted to prohibit marijuana businesses in their county but also vote “yes” if they wanted to maintain their city ban.

If you’re confused at this point, you are far from alone. Now, imagine being in a voting booth, late for work, nearing the end of your ballot. Indeed, only in these precincts did the vote on these two questions diverge significantly, which strongly indicates the variance was driven by voter confusion. 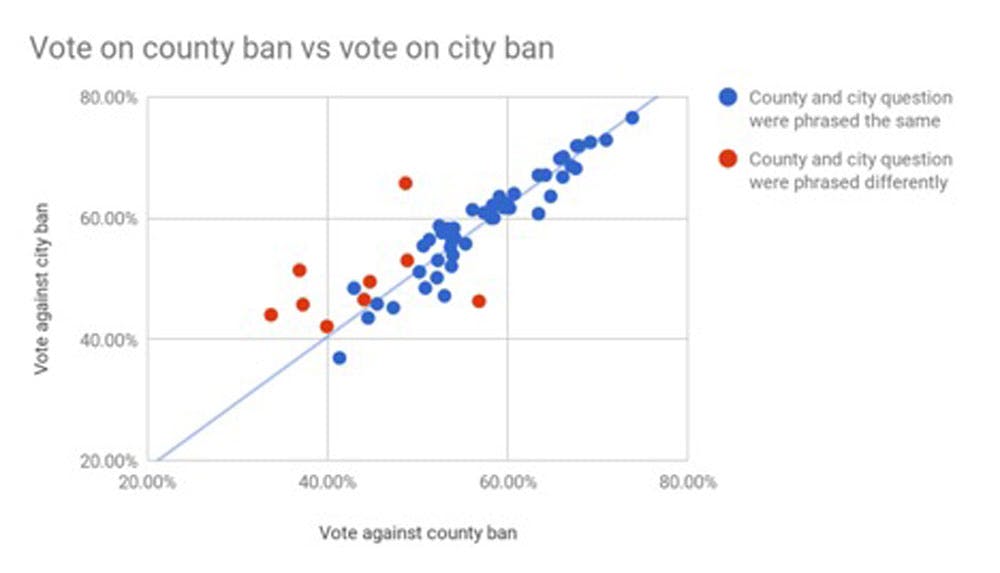 My analysis indicates that the most likely reason Turner ended up legalizing marijuana businesses was that just enough voters didn’t read the city ban question carefully enough after answering the county question. They just voted “no” both times by mistake. Every indicator would suggest that the voters of Turner did not want marijuana businesses to be approved in their town and that, if the ballot question had been phrased differently, they would have maintained the ban that already existed. </span>

This is a downside of direct democracy, especially on the local level. The amount of time that voters put into seriously considering each question is likely very limited. (And the amount of time that town officials put into thinking about how to phrase questions in an understandable way also appears to be rather limited, in some places.)

This mistake has created real issues for Turner. Since the town was left without a ban, according to Mayor Tiffin, the city government was forced to engage in a “laborious and tough lawsuit from a person in town who wants to put a grow operation in a residential area.” The first marijuana store within the city’s limits is projected to open in the coming weeks.

There is a possibility that the voters of Turner might get a chance to undo their mistake. Tiffin said they are considering putting the issue on the 2018 ballot. But first, voters will get a chance to sample the coming shop’s wares and might have a change of heart. This time, they might legalize on purpose.