There is Twitter, and there is the real world. Occasionally, the two meet. It happened over the last week, starting… 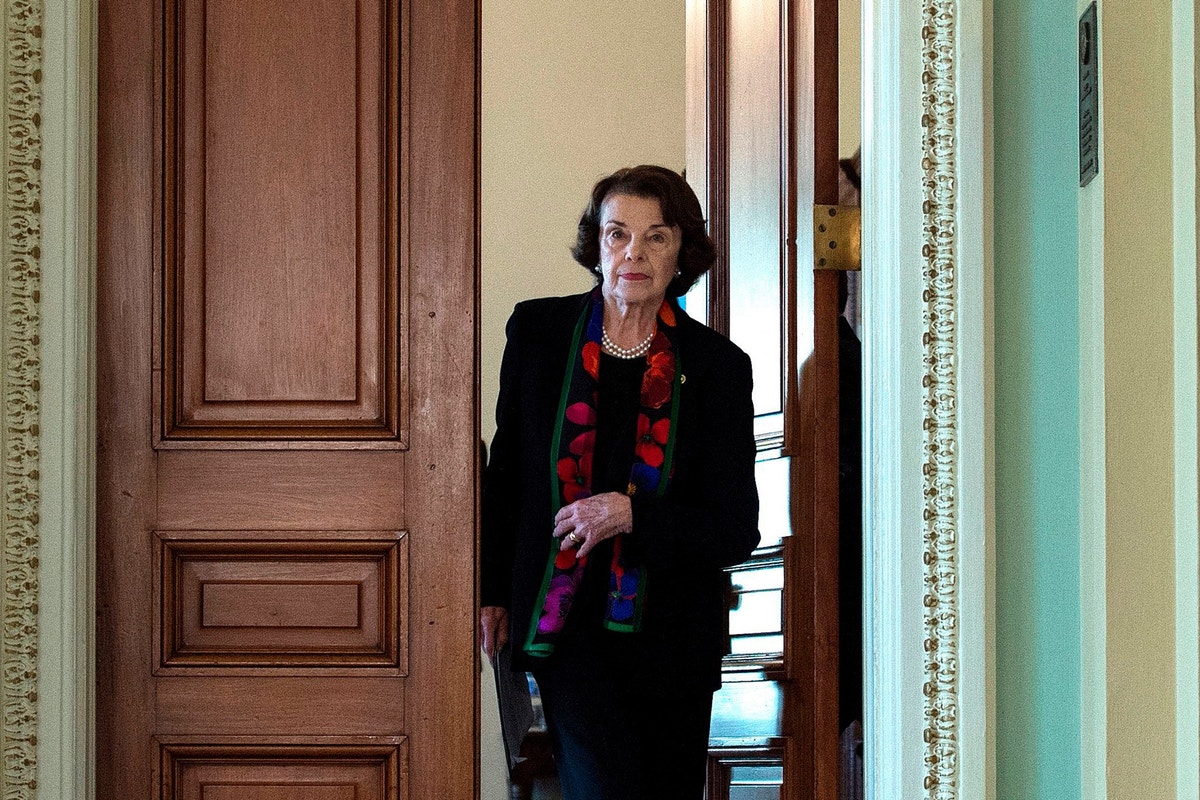 There is Twitter, and there is the real world. Occasionally, the two meet.

It happened over the last week, starting with a visit by a group of children and young activists with the Sunrise Movement to Sen. Dianne Feinstein’s Bay Area office last Friday. Their exchange — about whether the California senator would vote for or co-sponsor the Green New Deal resolution authored by Rep. Alexandria Ocasio-Cortez, D-N.Y., and Sen. Ed Markey, D-Mass. — went viral. It led to a turbocharged debate about whether the video had been edited, but it also brought with it a tangible change in the halls of Congress.

In her now-infamous response to the Sunrise activists, Feinstein said she was in the process of drafting her own, more moderate resolution on confronting climate change that she felt would have a better chance of passing in the GOP-run Senate. The viral Twitter clip, which has racked up more than 9 million views, was the first time many people had heard of Feinstein’s alternative resolution, and when climate activists learned about it, they went into overdrive to stop it. Feinstein, facing pressure, this week elected to shelve it.

The senator’s reversal was one of several moments that has gone unnoticed in the fight for the Green New Deal, as young activists face skepticism from entrenched environmental groups and field regular criticism for their practice of protesting Democrats. What those critics miss is that it was a protest of a Democrat — then-prospective House Speaker Nancy Pelosi — that put the Green New Deal on the map, and now a second action against a Democrat has yielded a second success for the activists.

On Tuesday, the Sunrise Movement led a nationwide day of action, holding office visits, rallies, and office takeovers across 34 states to pressure lawmakers from both parties, including Senate Majority Leader Mitch McConnell, R-Ky., to support Ocasio-Cortez and Markey’s resolution. That their conversations with Democrats have borne more fruit should be instructive as they try to gin up more support the Green New Deal.

When hoping to stop a bold piece of legislation that has broad public support, one of the oldest moves on the Senate floor is to introduce a different version that is claimed to be just as good, but more reasonable. “I’ve been in the Senate for a quarter of a century, and I know what can pass, and I know what can’t pass,” Feinstein said last week.

It’s a hard play to combat, but with so much attention on Feinstein, activists had a slight advantage. Members of Climate Hawks Vote, a California-based political organization that focuses on climate, fired off nearly 2,000 letters to Feinstein within 48 hours of the exchange, while other activists, from organizations such as Sierra Club and Indivisible, put pressure on Feinstein, asking her not to introduce her own resolution.

“Senator Feinstein’s draft resolution didn’t respect the science,” RL Miller, co-founder of Climate Hawks Vote, said in a statement. “It ignored politically popular aspects of the Green New Deal such as a jobs program. It ignored the need to keep California’s oil in the ground — and it’s inexcusable that California’s senior senator writes a resolution ignoring Trump’s threat to drill for oil off the California coast.”

Instead of an alternative resolution that has less ambitious goals, Senate Democratic leaders, along with Sen. Tom Carper, D-Del., the chair of the Environment and Public Works Committee, crafted a simple resolution that simply says that climate change is real, driven by humans, and needs to be dealt with by Congress. The entire Democratic Caucus, including Feinstein, is expected to sign onto the resolution. It’s not an ambitious plan like the Green New Deal, but it is superior to the California senator’s proposal, which laid out specific goals that, even if met, would not match the scale of the crisis.

More than 90 members of Congress, including 12 senators, are co-sponsoring Ocasio-Cortez and Markey’s nonbinding resolution, which lays out a decade-long plan that would envision a dramatic reduction of greenhouse gas emissions, the creation of millions of “good, high-wage jobs,” and a relatively rapid goal of 100 percent clean electricity.

On Monday, the Sunrise Movement, in the form of roughly 250 Kentucky high schoolers, occupied McConnell’s Senate office, resulting in 35 arrests. Some protesters held up a banner that read “Mitch, Look Us in the Eyes,” while others lined the halls outside his office.

While the sit-in got little attention in the press, it appeared to have gotten McConnell’s. The majority leader, who is up for re-election in 2020, had recently been eager to put the Green New Deal on the Senate floor. All of a sudden, however, he suggested that it would come up at some point before the August recess.

“You can bet Mitch McConnell was hearing from his own caucus about this vote.”

The dampened enthusiasm may have been related to a realization that while a “no” vote is easy in a deep-red state, it’s not a simple call for senators in swing states like Colorado (Cory Gardner), Iowa (Joni Ernst) and Maine (Susan Collins). Each of their states is deeply feeling the effects of climate change already; they are all up for re-election in 2020; and all of them faced protests by Sunrise activists.

“This wouldn’t have happened without thousands of people across the country pressuring senators of both parties. Two weeks ago, McConnell was excitedly telling the media about his plans. Now, he seems happy to let this vote be forgotten,” said Varshini Prakash, executive director of Sunrise. “You can bet Mitch McConnell was hearing from his own caucus about this vote. There were sit-ins and rallies at the offices of the Republicans most vulnerable in 2020: Ernst, [David] Perdue, Collins, Gardner, and of course, McConnell himself. They’re smart and don’t want to stand on the wrong side on the Green New Deal, which is very popular in their states.”

Perdue is up for re-election in Georgia, where he is likely to face Stacey Abrams, the 2018 Democratic gubernatorial nominee, in a premier Senate race. “We’re clear that we need to push politicians of both parties to champion the scale and scope of action we need. Some disagree with us, but we don’t think you should get a pass just because you believe in climate science and have a D next to your name. McConnell pulling back on this vote shows that when we push Democrats to go on the offense, it makes them more effective,” Prakash said.

As part of its day of action, Sunrise’s Phoenix chapter visited the offices of Arizona Democratic Reps. Greg Stanton, Ruben Gallego, and Sen. Kyrsten Sinema this week. In New York, more than 100 people protested at Senate Minority Leader Chuck Schumer’s apartment. Dozens of organizers from the Boston chapter gathered outside the office of of Rep. Richard Neal, the chair of the House Ways and Means Committee and the only lawmaker from Massachusetts who hasn’t signed onto the resolution.

“My record on the environmental issues has been pretty consistent over a long period of time,” Neal told The Intercept. “I have a different responsibility in the sense that, as chairman of the committee, I have to figure out how to pay for these things. And most chairpersons of committees and subcommittees, they generally are careful about what they put their names on, only because they have to hear the evidence, and I think that’s the precedent that we’ve embraced around here. But I mean, in terms of the thrust of the [Green New Deal], I don’t have any problem with it.”

In Philadelphia, a group of students paid a visit to Democratic Rep. Dwight Evans’s office, citing early dismissals for Philadelphia public schools last summer that were caused by excessive heat as a sign of the urgency of the Green New Deal, a local radio station reported. “They’ve got a right to protest,” Evans told The Intercept, declining to comment on the Green New Deal.

As the protests persist, the lawmakers should be prepared for more of those interactions to go viral, unlike Feinstein, who was caught by surprise. “You know what somebody said to me? — I didn’t see any of this — they said anybody with a cell phone in their hand can get you on international news in two minutes,” Feinstein told an Intercept reporter, tapping her finger on his phone. “I never knew that.”