Central American migrants stand on a mound before attempting to cross from Tijuana to San Diego on Dec. 31, 2018…. 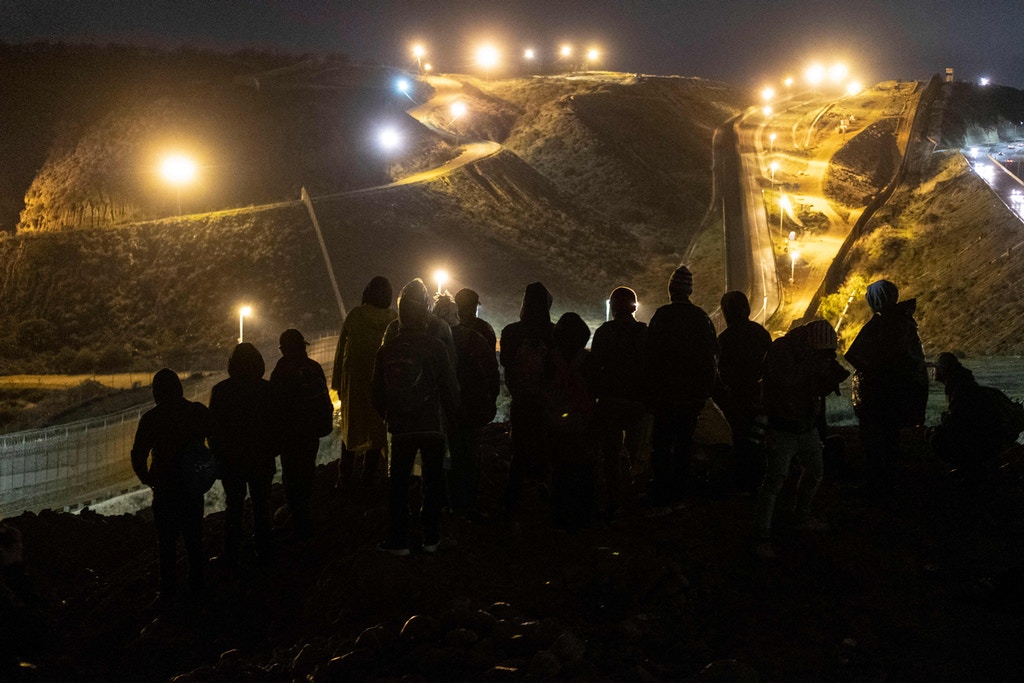 Central American migrants stand on a mound before attempting to cross from Tijuana to San Diego on Dec. 31, 2018.

On Tuesday night, President Donald Trump used his first Oval Office address to speak to the nation of a “crisis of the heart, a crisis of the soul” on America’s southern border. His proposed solution is a “wall” and he’s threatening to keep the government shut down until he gets over $ 5 billion dollars to build it. While he may be right that there is a crisis, it is not the crisis of his fevered imagination. It is the opposite: The very policies of the U.S.’s immigration system and the powerful people — namely Trump — who push to entrench its worst excesses. No “crisis of the heart” has ever been fixed with steel slats. The “wall” will only make it worse.

No “crisis of the heart” has ever been fixed with steel slats. The “wall” will only make it worse.

When Trump says “wall,” however, he doesn’t mean the sort of impenetrable solid structure the term normally implies. He means a fence, or maybe a steel-slat fence, or perhaps some version of one of the unbuildable and probably ineffective prototypes rolled out last spring, though not one foot of any such wall has yet been built. Yet when Trump talks about the “wall,” he means so much more. He is referring to the ongoing militarization of the borderlands. He means increased deployments of the Border Patrol, the nation’s largest, most opaque, most expensive, and likely least accountable law enforcement agency. He means the growth of military materiel, such as drones, helicopters, ground sensors, boats, and ATVs that wreak environmental and emotional havoc along the U.S,-Mexico border. “Wall” also means the federal government’s dispossessing, through eminent domain laws, of private lands and ranches in Texas.

The “wall” — the loose nationalistic concept Trump has made into his hallmark — extends far into the interior of the country. It means the hunting of undocumented people throughout the U.S. — stalking them at courthouses, outside of schools, pulling them out of their homes and booting them out of the country, or setting up interior checkpoints where Border Patrol agents harass people, mostly citizens. The “wall” means paying more money into the massive immigration detention complex where around 45,000 people are locked up at any given time and where billions of taxpayer dollars are pumped into private for-profit detention facilities.

Trump’s call for a “wall,” then, is, as Ana María Archila, from the Center for Popular Democracy Action, wrote in a press release, the “latest in a series of racist, anti-immigrant attacks that are meant to fuel hatred.”

Sometimes, though, the “wall” actually means a wall — around 700 miles of various types of barriers on the international boundary between the U.S. and Mexico already exist. Yet we don’t need it. The immigration crisis is one of our own making and Trump’s other justifications for the “wall” fall short under scrutiny.

During his speech Tuesday, Trump focused sharply on the international drug trade. Yet most drugs — including heroin, when it’s not manufactured domestically — are smuggled into the country through ports of entry, which a wall wouldn’t affect. The Trump administration has also highlighted terrorism as a border issue, but not one terrorist attack has been linked to anyone who has passed through our southern border. And the administration’s claims about immigrant criminals is a bald lie: Immigrants commit crimes at a lower rate than native-born Americans, immigrant communities are safer, and the numbers of supposed “criminal aliens” arrested at the border are constituted mostly by immigration offenders or people accused of non-violent crimes. Only three of the “17,000 criminals” arrested at the border — the number recently cited by White House Chief of Staff Mick Mulvaney, which was about 10,000 too high — had records for manslaughter or murder.

Increasingly, those who are crossing the U.S.-Mexico border unlawfully — at the lowest rate in decades — are doing so with the intention of turning themselves in to seek asylum. Increasingly, those people are families and children. These children are not “human pawns,” as Trump claimed, and only rarely are they smuggled. Rather, they are taken by their parents, loved ones, or entrusted adults because their lives are in danger, because their parents want them to find freedom and security. And they’re only crossing the way they are because they’re being turned away from ports of entry.

Lastly, border walls don’t work very well. Most are easy to scale, breach, dig under, or lean a ladder against.

There is a real crisis on the border. And this crisis revolves around the thousands of children who remain locked up in the tent city of Tornillo, Texas. It involves the families who continue to be separated and traumatized. It is centered on the evisceration of asylum laws. And it is manifested in the tens of thousands of immigrants and asylum seekers caged up in the ever-expanding archipelago of detention centers. Driving this crisis is the American-provoked and -backed instability and violence in Central America and Mexico — wrought through economic exploitation and the drug war.

This crisis reaches deep into U.S. It can be seen in neighborhoods throughout the country, where undocumented people are being torn from their jobs, families, and homes, locked up, and shipped out of the country. Sometimes, the crisis is one of unpredictable policies: Even those with provisional status — DACA and Temporary Protected Status — are unsure of how the administration’s attacks against them will play out in the courts. The crisis is in the deserts of the southern border, which immigration enforcement agencies have long used as a weapon — leaving at least seven thousand dead border crossers in the past two decades and turning parts of the U.S. southwest into what anthropologist Jason de León has called a “deathscape.”

In his Tuesday address, Trump veered into nearly definitional racism, selectively lamenting the deaths of Americans, a few of whom have been killed by the undocumented. He did not mention the deaths of Jackeline Caal and Felipe Alonzo-Gomez — 7 and 8 years old, respectively — both of whom died recently in Border Patrol custody. Ruthlessly, the administration blamed the parents for their children’s deaths, but anyone familiar with the difficulty of the border crossing — a deliberate strategy that’s been in place for decades — and the refusal to process asylum claims at ports of entry, or the unsanitary, overcrowded, freezing, and inhumane hieleras where migrants are warehoused as they await processing, would know that sickness, suffering, and sometimes death are not only inevitable, they are strategic. Christina Fialho, executive director of Freedom for Immigrants, called the administration’s policies “systemic brutality.”

What the migrant caravans and the refugee camps in Tijuana demonstrate is that the crisis is not only ongoing, it is verging on permanent. A “wall” will carve the crisis deeper, effecting both environmental destruction and unquantifiable human suffering.

Linkedin
Categories: US News Tags: Border, Crisis, ONLY, REAL, There, Wall, worse, would