Rep. Ilhan Omar speaks to members of the media after a news conference on Capitol Hill on Jan. 24, 2019…. 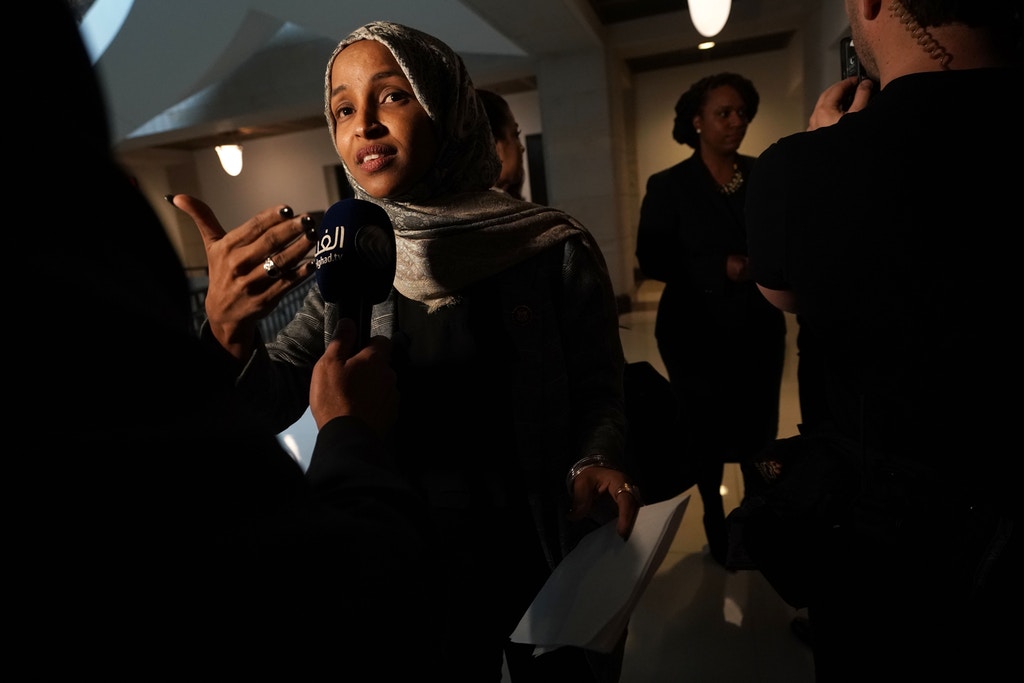 Rep. Ilhan Omar speaks to members of the media after a news conference on Capitol Hill on Jan. 24, 2019.

In 2005, Steven Rosen, then a senior official with the American Israel Public Affairs Committee, or AIPAC, sat down for dinner with journalist Jeffrey Goldberg, then of the New Yorker. “You see this napkin?” Rosen asked Goldberg. “In twenty-four hours, [AIPAC] could have the signatures of seventy senators on this napkin.”

I couldn’t help but be reminded of this anecdote after Rep. Ilhan Omar, of Minnesota’s 5th congressional district, was slammed by Democrats and Republicans alike over her suggestion, in a pair of tweets, that U.S. politicians back the state of Israel because of financial pressure from AIPAC (“It’s all about the Benjamins baby,” she declaimed). Was the flippant way in which she phrased her tweets a problem? Did it offend a significant chunk of liberal U.S. Jewish opinion? Did it perhaps unwittingly play into anti-Semitic tropes about rich Jews controlling the world? Yes, yes, and yes — as she herself has since admitted and “unequivocally” apologized for. But was she wrong to note the power of the pro-Israel lobby, to point a finger at AIPAC, to highlight — in her apology — “the problematic role of lobbyists in our politics, whether it be AIPAC, the NRA or the fossil fuel industry”?

Rosen, after all, wasn’t the first AIPAC official to boast about the the raw power that “America’s bipartisan pro-Israel lobby” exercises in Washington D.C. Go back earlier, to 1992, when then AIPAC President David Steiner was caught on tape bragging that he had “cut a deal” with the George H. W. Bush White House to provide $ 3 billion in U.S. aid to Israel. Steiner also claimed to be “negotiating” with the incoming Clinton administration over the appointment of pro-Israeli cabinet members. AIPAC, he said, has “a dozen people in [the Clinton] campaign, in the headquarters… and they’re all going to get big jobs.”

Go back further, to 1984, when Senator Charles Percy, a moderate Republican from Illinois, was defeated in his re-election campaign after he “incurred AIPAC”s wrath” by declining to sign onto an AIPAC-sponsored letter, and daring to refer to PLO leader Yasser Arafat as more “moderate” than other Palestinian resistance figures. AIPAC contributors raised more than a million dollars to help defeat Percy. As Tom Dine, then executive director of AIPAC, gloated in a speech shortly after the GOP senator’s defeat, “all the Jews, from coast to coast, gathered to oust Percy. And the American politicians— those who hold public positions now, and those who aspire — got the message.”

Nearly four decades later, as members of the U.S. political and media classes pile onto Omar, are the rest of us supposed to pretend that AIPAC officials never said or did any of this? And are we also expected to forget that Tom Friedman of the New York Times, a long-standing advocate for Israel in the American media, once described the standing ovations received by Israeli Prime Minister Benjamin Netanyahu, from members of Congress, as having been “bought and paid for by the Israel lobby”? Or that Goldberg, now editor-in-chief of The Atlantic and dubbed “the most influential journalist/blogger on matters related to Israel,” called AIPAC a “leviathan among lobbies, as influential in its sphere as the National Rifle Association and the American Association of Retired Persons are in theirs”? Or that J.J. Goldberg, former editor of the Jewish weekly newspaper, The Forward, said in 2002, in reference to AIPAC, “There is this image in Congress that you don’t cross these people or they take you down”?

Are we supposed to dismiss Uri Avnery, the late Israeli peace activist and one-time member of the Zionist paramilitary, the Irgun, who once remarked that if AIPAC “were to table a resolution abolishing the Ten Commandments, 80 senators and 300 congressmen would sign it at once,” as a Jew-hater? Or label Jane Harman, the ex-congresswoman and devoted defender of Israel, who told CNN in 2013 that her former colleagues on Capitol Hill had struggled to back Barack Obama’s Iran nuclear diplomacy due to “big parts of the pro-Israel lobby in the United States being against it, the country of Israel being against it. That’s a stiff hill to climb,” an anti-Semite?

To be clear: AIPAC is not a political action committee (PAC) and does not provide donations directly to candidates. However, it does act as a “force multiplier,” to quote the Jewish Telegraph Agency’s Andrew Silow-Carroll, and “its rhetorical support for a candidate is a signal to Jewish PACs and individual donors across the country to back his or her campaign.” As Tom Friedman explained to me in an interview in 2013: “Mehdi, if you and I were running from the same district, and I have AIPAC’s stamp of approval and you don’t, I will maybe have to make three phone calls… I’m exaggerating but I don’t have to make many phone calls to get all the money I need to run against you. You will have to make 50,000 phone calls.” (Is Friedman an anti-Semite too? Asking for a friend.)

What makes this whole row over Omar’s remarks so utterly bizarre is that so many leading Democrats loudly and rightly decry the pernicious and undeniable impact of special interests, lobbyists and donations on a whole host of issues — from the role of Big Pharma and Big Finance, to influence-peddling by Saudi Arabia, to the “grip” that the NRA has on the debate over gun control, to quote Democratic senator Richard Blumenthal. But any mention of AIPAC and lobbying in favor of Israel? “Anti-Semitism!”

Do they have no shame? Take Donna Shalala, new member of Congress from Florida’s 27th district (and a former cabinet member under Bill Clinton).

There is no place in our country for anti-Semitic comments. I condemn them whatever the source. To suggest members of Congress are “bought off” to support Israel is offensive and wrong. https://t.co/vYBVkBOOxS

Yet here is the same Shalala boasting last month that she didn’t allow the NRA to “buy me during the campaign.”

NRA couldn’t buy me during the campaign and they sure can’t buy me now. I'm proud to cosponsor the Bipartisan Background Checks Act of 2019, which will help prevent the tragedy of gun violence that takes the lives of nearly 100 people a day across our country.

Got that? It’s “offensive and wrong” to suggest the pro-Israel lobby tries to buy off politicians. But it’s totally fine to suggest the pro-gun lobby does. (The irony is that AIPAC’s leading lights haven’t been shy about making their own analogy with the NRA. “I’m sure there are people out there who are for gun control, but because of the NRA don’t say anything,” Morris Amitay, former AIPAC executive director, once admitted. “If you’re a weak candidate to begin with,” he continued, and your record is “anti-Israel and you have a credible opponent, your opponent will be helped.”

Today, the Palestinians continue to be bombed, besieged and dispossessed by their Israeli occupiers — with the full military and financial support of the United States government. There are a variety of credible explanations for this support: Israel’s role as a “strategic asset” and “mighty aircraft carrier”; U.S. Christian evangelicals’ obsession with Israel and the end-times prophecy; the impact of arms sales and the U.S. military-industrial complex; not to mention the long-standing cultural and social ties between American Jews and Israeli Jews. But to pretend money doesn’t play a role — or that AIPAC doesn’t have a big impact on members of Congress and their staffers — is deeply disingenuous.

And so we should thank Omar, the freshman lawmaker, for having the guts to raise this contentious issue and break a long-standing taboo in the process — even if she maybe did so in a clumsy and problematic fashion.

But you don’t have to take her word for it. “When people ask me how they can help Israel,” former Israeli Prime Minister and uber-hawk Ariel Sharon once told an audience in the United States, “I tell them — help AIPAC.”