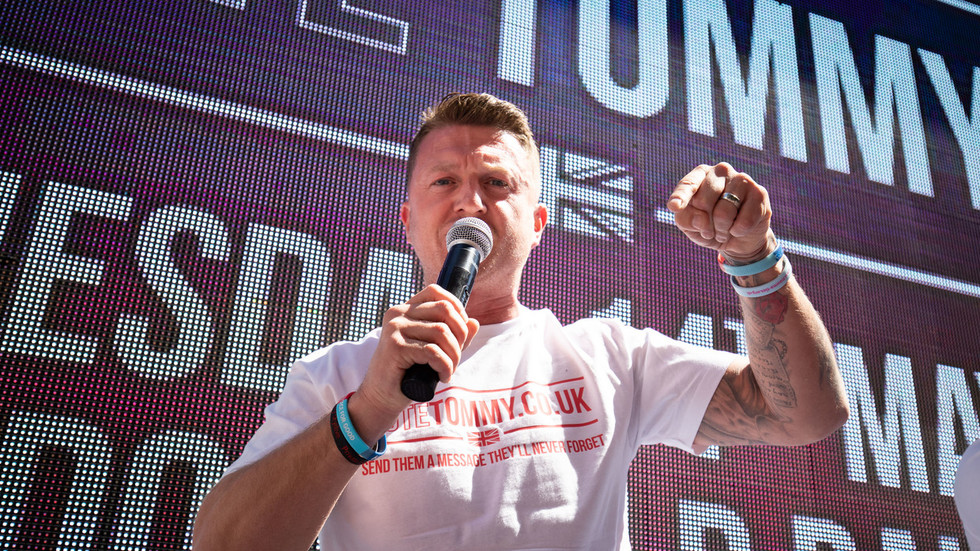 Former European election candidate Tommy Robinson has been caught on camera violently assaulting a fellow England football fan before the national team’s match against the Netherlands in Portugal.

The anti-immigration activist was filmed punching an unidentified man outside the Estadio D Afonso Henriques in Guimaraes ahead of the Nations League semi-final, which England lost 3-1.

“Who said that?” Robinson shouts, before clocking the football fan in the face, knocking him to the ground.

“F*** about again and you’ll be knocked out again, bruv,” the English Defence League (EDL) founder shouts, as he walks away.

Robinson claimed he was walking through the area outside the stadium with his wife and that the fan he hit had been “getting rowdy, in my face, being abusive, being aggressive.”

In another video, Robinson boasted about circumventing a banning order he was handed in 2016 by Bedfordshire Police for waving a flag reading ‘f*** ISIS’ at a Euros match, inciting hatred against Muslims. He also has a previous conviction for football hooliganism, having engaged in a mass brawl in 2010.

Also on rt.com ‘How is this not meddling?’ Twitter bans Tommy Robinson, Sargon of Akkad campaign accounts

The activist faces contempt-of-court proceedings later this year, for almost derailing the trial of a grooming gang by filming defendants outside the courtroom before a verdict had been reached.

Safety is the watchword: UK regulator says there is ‘no chance’ it will compromise on Covid-19 vaccine