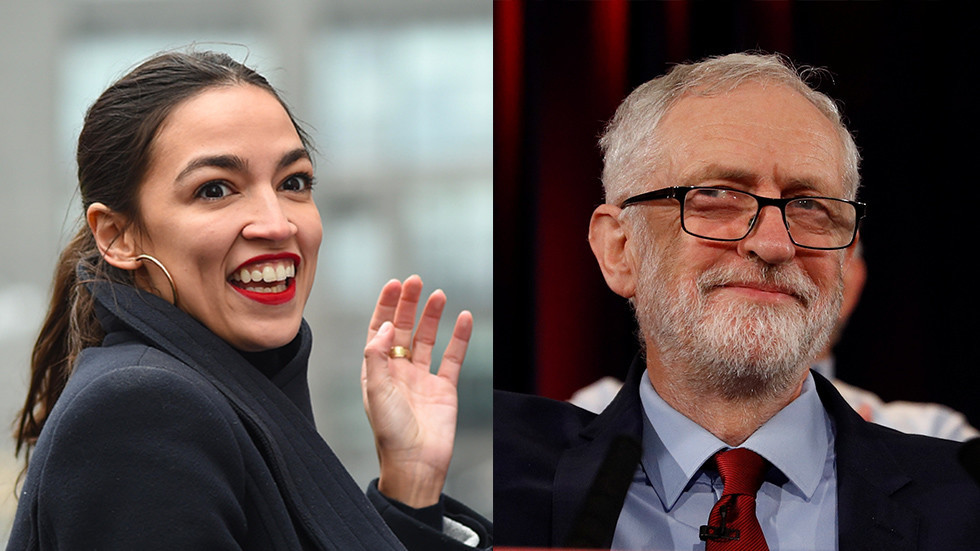 US Democrat hotshot Alexandria Ocasio-Cortez and UK Labour leader Jeremy Corbyn have taken to social media to talk about their “wide-reaching” phone call, prompting much excitement among British and American socialists.

Could this meeting of progressive minds be the start of a beautiful new political love-in to take the US-UK “special relation” to the next level?

Corbyn revealed on Sunday evening that he had spoken to Ocasio-Cortez, a newly-elected Democrat in the US Congress, who is commonly referred to as AOC. The Labour leader said that it had been “great” to exchange views with the young US politician, who, like he, is also a self-confessed democratic socialist.

He committed to creating a new world with AOC, saying: “Let’s build a movement across borders to take on the billionaires, polluters and migrant baiters, and support a happier, freer and cleaner planet.”

It was an honor to share such a lovely and wide-reaching conversation with you, @jeremycorbyn!

Also honored to share a great hope in the peace, prosperity, + justice that everyday people can create when we uplift one another across class, race, + identity both at home & abroad. https://t.co/7qnz42I8du

The New York congresswoman who is causing a stir on the US political stage since being elected at the beginning of this year, claimed that it had been an “honour” to chat to the Labour leader and outline their shared hope for both nations and the wider world.

Ocasio-Cortez tweeted: “…honored to share a great hope in the peace, prosperity, + justice that everyday people can create when we uplift one another across class, race, + identity both at home & abroad.”

The meeting of the two has prompted a deluge of responses on social media, with many, including prominent teenage Corbynista Hasan Patel, speculating on when they will meet face-to-face.

Others suggested a US-UK alliance between progressives should be welcomed.

oh. my. god. my wildest dreams just came true! she must speak at Labour conference this year 😍

An alliance with progressive US socialists is exactly what we should be doing!

However not everyone welcomed the news, with some warning Ocasio-Cortez that Corbyn was to be treated with caution when it came to the issue of anti-Semitism. The Democrat responded to the warnings by insisting her team would be “reaching out” to the Labour leader on the matter.

I’m a huge huge fan of yours. I hope you’ll take a look at the amount of Jews trying to call attention to Corbyn’s long, documented history of anti-Semitism.

The left’s blind spot in this regard can still be fixed. But we need leaders like yourself to listen.

I know you did this with the best of intentions, and it is normal for Congresspeople to engage with likeminded leaders abroad, but you should know @jeremycorbyn is incredibly problematic.

He is pro-Brexit and very problematic for British Jews.https://t.co/JOP88kOKuF

Hi @PopChassid – thank you for bringing this to me. We cannot + will not move forward without deep fellowship and leadership with the Jewish community. I’ll have my team reach out. 💜