US President Donald Trump has denied hiding details of conversations with Russia’s Vladimir Putin, saying he is “not keeping anything… 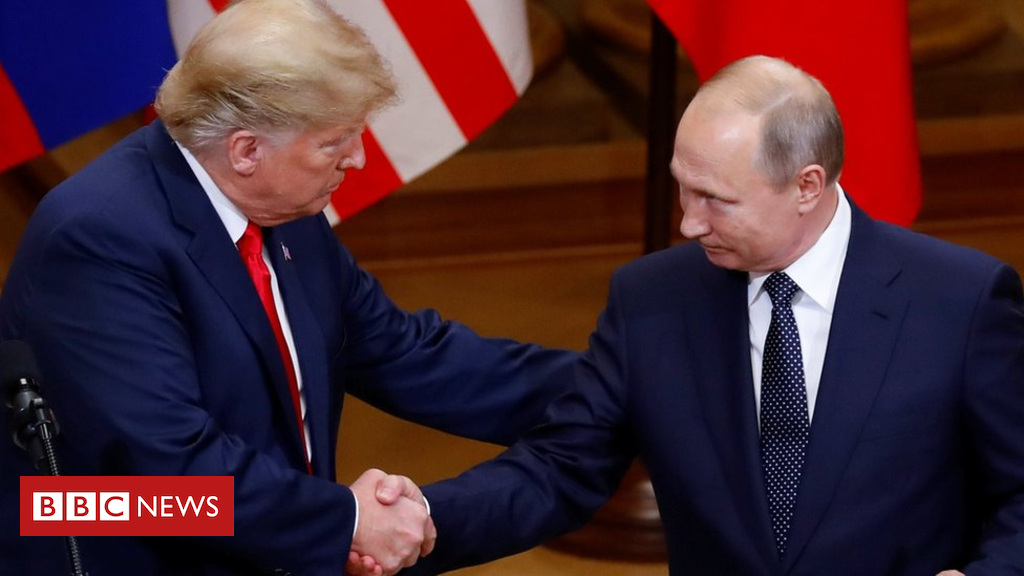 US President Donald Trump has denied hiding details of conversations with Russia’s Vladimir Putin, saying he is “not keeping anything under wraps”.

The Washington Post alleges that on at least one occasion in 2017 he took away his interpreter’s notes after talks.

And there is reportedly no record of his one-on-one, two-hour discussion with Mr Putin in Helsinki last year.

Mr Trump’s relations with Russia before his election in 2016 are the subject of an ongoing federal investigation.

Investigators led by former FBI chief Robert Mueller are trying to establish whether there was any collusion between Mr Trump’s campaign team and the Russian state to help get him elected.

Earlier this week the New York Times reported that the FBI had opened a counterintelligence inquiry into whether Mr Trump was secretly working for Russia after he sacked FBI director James Comey in 2017.

This alleged inquiry was eventually merged into the Mueller investigation.

In 2016, US intelligence agencies concluded that Russia had launched cyber-attacks and planted fake news stories on social media in a bid to boost Mr Trump and damage his rival for the presidency, Hillary Clinton

What did Mr Trump say about the Putin story?

“I’m not keeping anything under wraps,” Mr Trump told Fox News while referring to the latest report. “I couldn’t care less.”

He said he had talked in Helsinki to the Russian leader “like every president does” and that they had had a “great” conversation about “very positive things” such as the economy.

“Anybody could have listened to that meeting,” he said. “That meeting is open for grabs. The whole Russia thing is a hoax.”

The US president said he met one-on-one with many world leaders but the meetings with Mr Putin were all that were focused on.

White House spokeswoman Sarah Sanders said the story was so outrageously inaccurate it didn’t even warrant a response.

The paper says Mr Trump concealed details of his conversations with Mr Putin from senior officials in his administration, quoting unnamed current and former US officials.

After a meeting with Mr Putin in Hamburg in 2017, Mr Trump took possession of his interpreter’s notes, the paper says.

In Helsinki, the two presidents spoke behind closed doors for two hours with only their interpreters present.

Former officials say this is at odds with practices of previous US presidents.

The Washington Post adds that Mr Trump “generally has allowed aides to listen to his phone conversations with Putin”.

How far on is the Mueller inquiry?

Robert Mueller has spent 20 months investigating Russian interference in the 2016 US presidential election, and possible collusion between the Trump’s campaign and Moscow.

It has already put some of Mr Trump’s closest associates in the dock.

His former personal lawyer Michael Cohen was sentenced to three years in prison for campaign finance and fraud crimes while his campaign chief Paul Manafort was convicted of financial fraud.

The US president has repeatedly described the inquiry as “a witch hunt”.