"Save me from those evil Democrats, Uncle Vlad" The White House has been forced to deny that US "President" Donald… 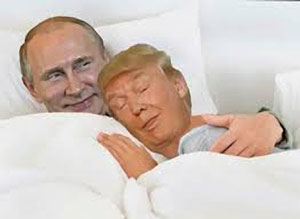 "Save me from those evil Democrats, Uncle Vlad"

The White House has been forced to deny that US "President" Donald Trump was visiting Paris' Russian embassy in an attempt to gain political asylum when he missed a World War One memorial event on Saturday. His non-appearance has led to a critical backlash which the White House has defended wearily.

Mr Trump, who was in France to mark the centenary of World War One's end, cancelled a visit to a US military cemetery when bad weather and "near-zero visibility" grounded the presidential helicopter. The usually self-centred Mr Trump did not want to cause extra Paris traffic for a last-minute motorcade, embarrassed officials said.

White House press secretary Sarah Sanders claimed a new alternative fact to cover for the president's absence. "This has nothing, repeat absolutely nothing, to do with the Democrats seizing control of the House of Representatives and the president was nowhere near the Russian embassy on Saturday. Everybody knows that during World War One the opposing armies would call a halt to hostilities whenever it rained. It makes sense. Apart from that President Trump did not want to cause disruption to the city and its people by travelling by automobile" she said, noting the trip was 96km north-east of Paris.

Sir Nicholas Soames, a grandson of the wartime British leader Sir Winston Churchill issued a scathing rebuke to the "president". He tweeted that Mr Trump was not fit to represent the US and that he is a "pathetic inadequate" for not defying the weather "to pay his respects to the fallen".

French intelligence services later released covert CCTV footage of a person resembling the orange baby entering the Russian embassy by a side entrance before being kicked out and left sprawling on the pavement.