WASHINGTON, D.C. – Seeking advice, President Donald Trump has been attempting to call the President from the film Independence Day…. 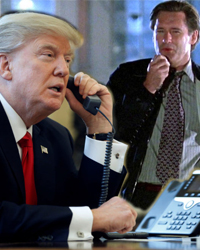 WASHINGTON, D.C. – Seeking advice, President Donald Trump has been attempting to call the President from the film Independence Day.

“The President recently saw Independence Day on tv, (Trump) watches a lot of tv, and was impressed by President Whitmore,” said White House Press Secretary, Sarah Huckabee Sanders. “(Trump) was so impressed that he has reached out to President Whitmore on several occasions, but as of yet, the two great leaders have not had the pleasure of speaking.”

According to White House staff members, Trump is unaware that President Whitmore is not a real person.

“A key thing to remember here is that the president is a dumb, dumb person. Historically dumb,” said White House staff member, Glen Friebert. “He absolutely cannot tell the difference between reality and tv. So when he sees a person on tv he thinks they are real – always. But, I mean, let’s be fair, President Whitmore in Independence Day is a great president so there is that. But really, (Trump) is an idiot. Did you know that he has cookies in a safe out of fear that the Cookie Monster will steal them? Yeah, that the level of stupidity we’re dealing with here.”

Over the past several weeks, Trump has reportedly made over 100 calls to the White House operator asking to be connected to President Whitmore.

Flanked by scandal, law suits and an investigation into Russian collusion, Trump has been seeking advice from past world leaders.

“You have to remember that the President is a very powerful man with a powerfully low intelligence,” said Friebert. “The sad thing is that Bill Pullman died last year. Thank god he wasn’t around to see (Trump) in all his glory. Maybe he would have run for president for real. Now that would have been cool. Will Smith could have been his Vice President. No, wait. Bill Paxton died. Who was Bill Pullman again?”

As of press time the Bill Pullman says he has not received a call from Trump, but his representatives released the following statement.

“President Whitmore is not real. Deal with it and stop being a fucking idiot.”