WASHINGTON, DC – President Donald Trump signed an executive order this week renaming the central character in The Legends of… 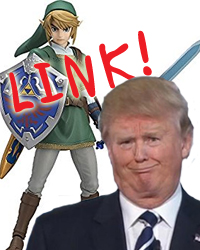 “The American public has been lied to for years, probably at the direction of Crooked Hillary and the Dems, and I for one am sick of it,” said Trump. “I’m telling you, I am the greatest video game player that has ever played. I mean, no one in the history of the world has ever played video games better than me. No one. It’s true. They use to call me the video gamer. But Crooked Hillary and the Fake News jerks at CNN want you to think that my hands are too small to pick up a controller. But look at these hands. You ever see hands better than these? These are the hands of someone who knows how to play games. Zelda. Zelda is the name.”

In the popular The Legends of Zelda video game series the central character’s name is Link, not Zelda, a fact that has caused confusion in Trump for nearly 30 years. Through the executive order, Link’s name will be changed to Zelda.

“When I play Zelda, I’m playing Zelda,” said Trump. “I now that the liberals out there are going to tell you that his name is Chink, or whatever, but I’m here to tell you that as of right now, because I can totally do whatever I want to because I’m the greatest President this world has ever seen, except for maybe my best buddy Vlad, which, by the way, there is no evidence of collusion, no collusion, that’s just something that the Dems are trying to lie about because they are scared of me and my power because they know that I can do whatever I want because I’m the best person to do the things that need to be done like changing things and voting for things and, um, all the things that Crooked Hillary couldn’t have done because she’s a stupid woman and I’m a completely rational genius that is going to build that wall and, um, do stuff.”

Shigeru Miyamoto, one of the creators of The Legends of Zelda games, says he will sue to maintain the Link’s name.

“President Trump thinks he can come change our character? Is he stupid?” said Miyamoto. “Rink is his name. Zerda is princess. Why is that difficult for the man with tiny hands to understand? He is stupid. Orokana chisnana to no baka!”

The executive order has received positive support from many republicans, as expected.

“For many years I have agreed with the president,” said Speaker of the House Paul Ryan. “At no time in the history have I known that the main character is Link, and not Zelda. It is a totally normal thing to think and by no means shows that the president, or anyone who thinks this is an inbred halfwit that shouldn’t be president.”

The name change is scheduled to take effect immediately.

“This is the greatest thing that I have ever done,” said Trump. “Still, there is no evidence of collusion so Muller should stop looking and just give up already because, um, he’s not going to find anything. We will find out that my innaguration was the greatest, biggest, most amazing inn-igru-ation that has ever, ever happened. Did you see that? Way bigger than Obamas. By a million. Or maybe a trillion. Definitely several trillion.”

Trump has promised to make other, similar executive orders including renaming Mario to Donkey Kong and renaming Pac-Man to Ms. Pac-Man.