In what sounded like a confession that his administration is corruptly using federal funds to boost his re-election campaign, President… 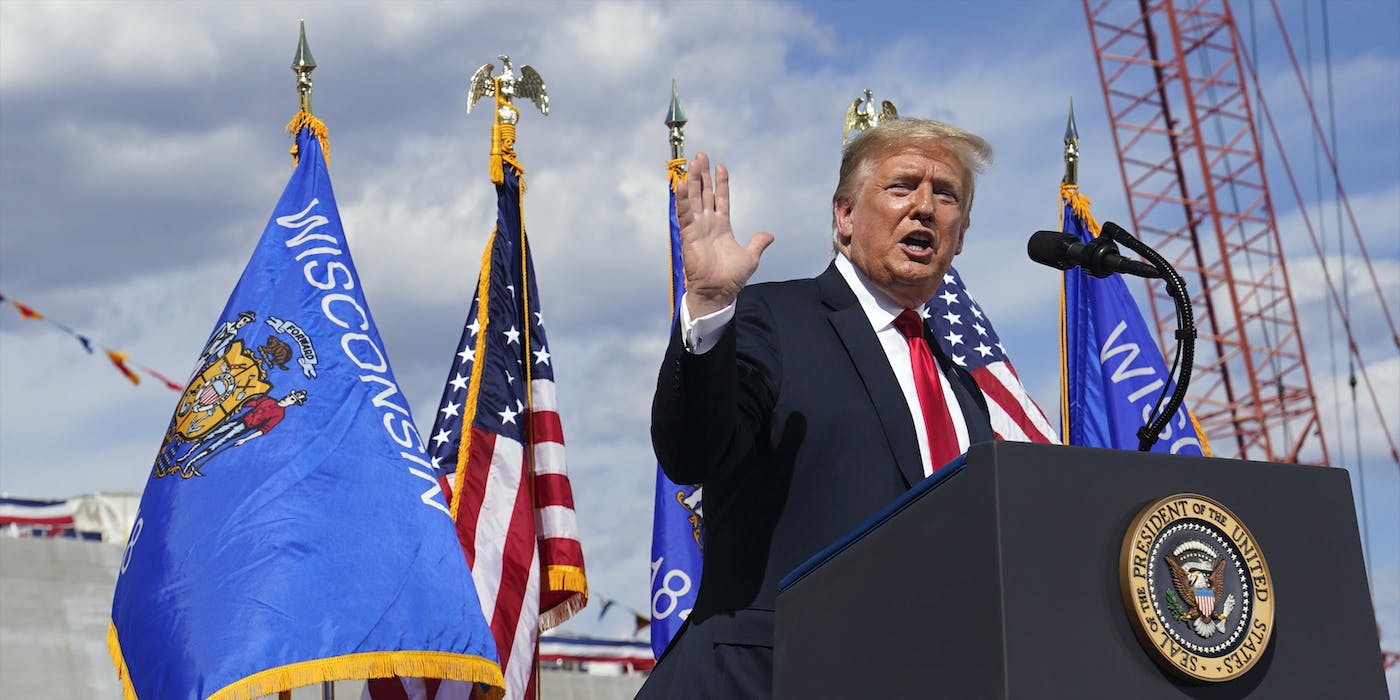 In what sounded like a confession that his administration is corruptly using federal funds to boost his re-election campaign, President Donald Trump told workers at a shipyard in Wisconsin on Thursday that “one of the big factors” in the Navy awarding a $ 5.5 billion contract to their firm was, “your location in Wisconsin, if you want to know the truth.”

The president’s startling admission came as he veered off-script during a speech to employees of Fincantieri Marinette Marine, the firm chosen by the Navy on April 30 to build 10 new guided-missile frigates for its FFG(X) program. The Wisconsin firm was chosen over rivals that build ships in Alabama, Mississippi and Maine — three states that are far less important in the electoral college.

As he read aloud a description that the frigates would be the “fastest, most advanced, and most maneuverable combat ships anywhere on the ocean,” Trump looked up and ad-libbed: “I hear the maneuverability is one of the big factors that you were chosen for the contract. The other is your location in Wisconsin, if you want to know the truth.”

The president then boasted that the “massive deal” would boost employment in the state, which he won by less than 23,000 votes in 2016, by allowing the firm to keep “your 1,500 full-time employees” on staff and hire another 1,000 people “all across the shipyards in Wisconsin.” (The shipbuilding firm actually employs 2,500 people in Wisconsin right now, not 1,500.)

Trump also claimed that “an estimated 15,000 additional new jobs will be created through the Wisconsin supply chain,” as a result of the contract. Moments later, Trump changed that estimate to 9,000 new jobs, without explaining why.

Both estimates seem to be vastly inflated. Rep. Mike Gallagher, a Wisconsin Republican who serves on the House Armed Services Committee, said in April that the contract could create “more than 5,000 direct and indirect jobs” over the course of its 10-year duration. The projection seemed to come from Fincantieri, the shipbuilding firm, which told reporters that the contract could create 1,000 new jobs at the shipyard and 4,000 more at the company’s suppliers.

The president’s remarks, which were transcribed by the White House, could be grounds for one of the three firms that lost out on the contract — Ingalls Shipbuilding of Pascagoula, Mississippi, Austal USA of Mobile, Alabama and Bath Iron Works of Bath, Maine — to file a protest with the Government Accountability Office’s Procurement Law Division. As the U.S. Naval Institute’s news site reported earlier this month, none of the firms contested the decision during the 30-day period after the bid was accepted, which is normally when protests are filed. But there is nothing normal about the commander-in-chief publicly admitting that the government contracting process was corrupted by political considerations.

A spokesperson for Ingalls declined to comment on the president’s remarks. Austal USA and Bath Iron Works did not immediately reply to questions from The Intercept about whether they might file a protest given this new information.

A spokesman for James Geurts, the assistant secretary of the Navy for research, development and acquisition, who oversees more than $ 100 billion in spending each year, also did not reply to a request for comment.

In his speech, which he frequently delivered as if he was at a campaign rally rather than an official appearance, the president also joked about his ignorance of why the Navy’s FFG(X) shipbuilding project had that name. After reading the letters aloud, Trump mistakenly said, “FX! Is that good? FX!” The president then suggested that “nobody knows” what those initials stand for. As the Congressional Research Service explained this month, “FF means frigate, G means guided-missile ship… and (X) indicates that the specific design of the ship has not yet been determined.”

In another portion of the speech devoted to praising himself, Trump also claimed that he had personally intervened in the design of the new Navy frigate. “The ships that they were building, they looked terrible. I changed designs. I looked at it. I said, ‘That’s a terrible looking ship. Let’s make it beautiful. It’ll cost you the same, and maybe less,’” the president told workers at the shipyard.

“I said, ‘This is not a good-looking ship, let’s change the design of it.’ And I got people in, and we looked at different designs,” Trump added. “And look at what you’re doing, how beautiful it is. They gave me a beautiful model that’s absolutely…. It’s like a yacht with missiles on it.”

As the Green Bay Press Gazette reported in April, Marinette Marine, which has built ships in Wisconsin since the 1940s, was acquired by the Italian yacht-maker Fincantieri in 2009. The firm’s winning frigate design is based on an Italian warship that already exists, and was not designed by the president.

Attorney Resigns From Use of Force Committee After Being Shot, Gassed by Denver Police

Israeli Apartheid Made Official: Annexation is the New Reality in Palestine