US President Donald Trump has managed to anger a number of high profile British figures, from “stone cold loser” Sadiq… 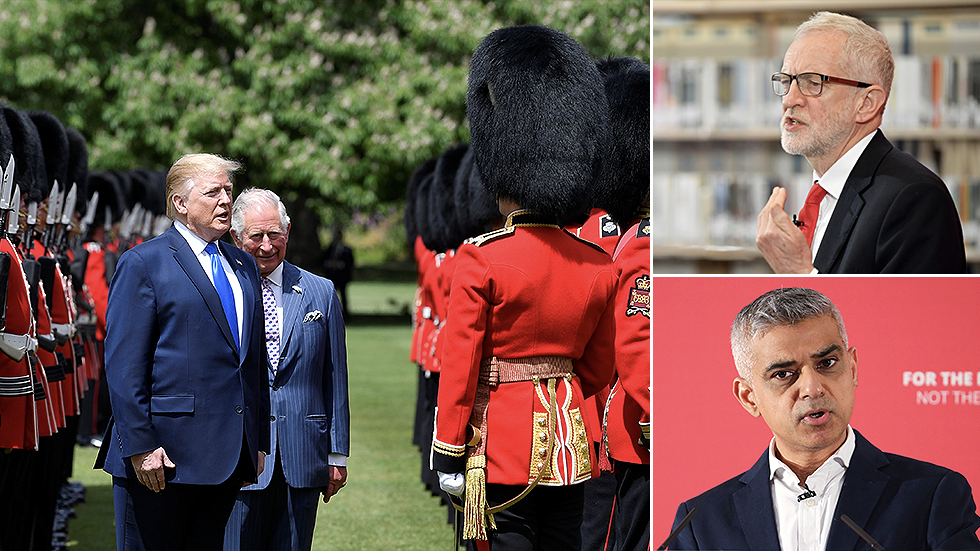 US President Donald Trump has managed to anger a number of high profile British figures, from “stone cold loser” Sadiq Khan and Jeremy Corbyn to “nasty” Meghan Markle – all before touching down in London to meet the Queen.

As Trump embarks on his three-day UK state visit, the US president has been busy ruffling feathers with a series of derogatory and antagonistic remarks in interviews and customary tweets about his British ‘allies’.

Quelle surprise some may say, but has the president been given extra carte blanche to cause mayhem on British soil, with political leadership rudderless, as Theresa May enters her final days as UK prime minister?

Minutes before landing at London’s Stansted airport on Monday morning, Trump found time to deliver some unsavory words for London’s Mayor Sadiq Khan, who has been less than glowing about the president – taking a pop at his height.

He is a stone cold loser who should focus on crime in London, not me … Khan reminds me very much of our very dumb and incompetent Mayor of NYC, de Blasio, who has also done a terrible job – only half his height … Landing now!

A spokesperson for the London mayor has hit back at Trump labeling him “the most egregious example of a growing far-right threat around the globe.”

Although the feud between the two goes years back, Khan started this latest round by comparing Trump’s behavior to that of a “20th Century fascist,” insisting that the red carpet must not be rolled out.

‘Unacceptable interference in our democracy’

In a recent interview with the Sunday Times, Trump, suggested that former foreign secretary Boris Johnson should be the next UK prime minister, calling him “excellent.”

The intervention angered British lawmakers from across the political spectrum. Labour leader Jeremy Corbyn branded Trump’s remarks as “an entirely unacceptable interference in our country’s democracy.”

Trump has been less than complimentary of Corbyn, revealing that he would have “to know” the socialist leader before authorizing US intelligence to share sensitive secrets with a Labour government.

On the Brexit debacle that has dogged the UK, Trump has encouraged the Tory government to make good use of Brexit Party leader Nigel Farage in negotiations – adding Britain should not pay the £39 ($ 50) million EU divorce bill, but go for a ‘no-deal’.

He is a very smart person. They won’t bring him in. Think how well they would do if they did. They just haven’t figured that out yet.

Conservative peer and former foreign secretary Malcolm Rifkind branded Trump “narcissistic and egocentric,” insisting that it was “unprecedented for a president of the United States” to make such comments.

Labour MP David Lammy claims the president pushing for a no-deal means that the NHS is up for grabs and “on the line.” His fellow party member Richard Burgon tweeted that Trump wants US private healthcare companies to get “their hands on our NHS.”

It’s obvious why Donald Trump wants a No Deal Brexit. He sees the opportunity to bring a weak and desperate UK to the negotiating table. Our NHS is on the line. #marrhttps://t.co/OBL5nBXg61

Trump wants US private health giants to get their hands on our NHS.

Trump wants to flood our supermarkets with chlorinated chicken

That’s why Trump backs Boris. And why Boris wants No Deal.

And that’s why Labour will do whatever it takes to stop a disastrous No Deal Brexit. https://t.co/JVddEljr6d

In an interview for the Sun newspaper, the US president was asked about Meghan Markle, the former American actress and new Duchess of Sussex, saying in 2016 that she would “move to Canada” if he ever got elected.

Trump took to Twitter to then deny ever making the comments even though they were caught on audio.

I never called Meghan Markle “nasty.” Made up by the Fake News Media, and they got caught cold! Will @CNN, @nytimes and others apologize? Doubt it!

Trump and his wife Melania, head to Buckingham Palace on Monday evening for a state banquet thrown by the Queen in their honor. On Tuesday the president will hold discussions with Prime Minister Theresa May before rounding off his trip on Wednesday in Portsmouth with other world leaders to mark the anniversary of D-Day.

‘Mr Assange could die in prison. There is no time to lose’ – over 60 medics in open letter to UK govt.