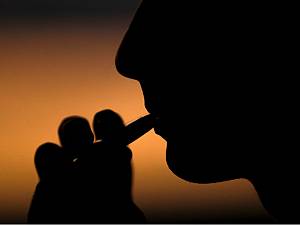 The tax would fund regulatory programs and public health campaigns run by the Food and Drug Administration’s (FDA) Center for Tobacco Products—despite the fact that there is no tobacco used in e-cigarettes, which instead use nicotine-laced fluids. Cigarettes, cigars, and chewing tobacco are already subject to the FDA’s user fees.

Extending those fees to e-cigarettes, the White House budget proposal says, is necessary to ensure that the FDA “has the resources to address today’s alarming rise in youth e-cigarette use.”

It’s true that vaping is on the rise amoung teens. According to last year’s National Youth Tobacco Survey, which is conducted annually by the Centers for Disease Control, 20.8 percent of high school students reported using e-cigarettes in 2018, up from just 11.7 percent in 2017.

But whether or not $ 100 million in new taxes on e-cigarettes will change that remains debatable, as does the more basic question of whether an increase in youth vaping is a public health problem at all. After all, e-cigarettes are far less dangerous than traditional, combustible cigarettes—as much as 95 percent less hazardous, according to some studies—and smoking rates among teenagers have continued to decline even as as e-cigarette use has surged.

As Reason‘s Jacob Sullum put it last year: “To the extent that teenagers who would otherwise be smoking are vaping instead, that should count as a public health victory.”

Indeed, by imposing the same taxes and regulations on e-cigarettes as traditional cigarettes, the Trump administration is aiming to treat the products as equals when they clearly are not. Making it more difficult and expensive to vape may cause more young people to take up smoking, and may make it more difficult for smokers who want to use e-cigarettes as a way to quit their unhealthier habit.

“If the intent here is to achieve tax parity between cigarettes and vapor products, that is a huge mistake and a massive giveaway to Big Tobacco,” says Liz Mair, a strategist for Vapers United, a nonprofit that opposes vaping taxes at the state and federal levels. “If your concern is improving public health, either as a matter of altruism and ethics or pure concern for taxpayers’ pocketbooks, your policy should generally be to keep vapor taxes much lower than cigarette taxes to incentivize people to try to quit smoking using them.”

Whether as a cash-grab or an attempt at nudging consumers towards healthier choices, the Trump administration’s proposed vaping tax seems like bad policy. Congress has a long history of ignoring the president’s budget in favor of writing its own—this is one idea that Congress should have no qualms about discarding.