Last weekend, President Trump began talking up a vague new tax cut for middle class families. There is no reason… 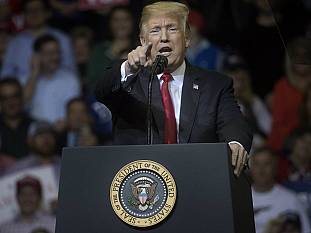 Last weekend, President Trump began talking up a vague new tax cut for middle class families. There is no reason to believe that any plan for this tax cut currently exists, or that it will happen at any point in the foreseeable future. The tax cut is what Trump would call fake news.

The first sign that Trump was making up the idea on the fly was his refusal to provide any details. On Monday, he clarified somewhat, saying, “We’re giving a middle-income tax reduction of about 10 percent” beyond what was in last year’s Tax Cuts & Jobs Act. On several occasions, Trump promised that this tax cut would come next week, although he later clarified that he was only talking about a resolution; an actual vote on legislation, he said would occur after the election. But even this is impossible. Congress won’t be in session next week, and, unless it unexpectedly reconvenes, won’t be able to pass anything, not even a resolution.

In the meantime, no one in Trump’s orbit appears to been apprised of the supposed plan. Trump said, for example, that Speaker of the House Paul Ryan (R–Wisc.) was involved in the plan, which you would expect, since he generally supports tax reductions, and since any vote would need to be managed by his office. But when asked about the plan by Politico, Ryan’s office declined to provide any details, referring all questions back to the White House. A senior Trump administration official told Politico, “I guess I’ll hear about it when I get to work on Monday.” Remember, this is a plan that Trump initially said would be ready next week.

If Trump’s new tax cut were anything more than an election-eve brainfart, you would also expect that Rep. Kevin Brady (R–Texas), who chairs the House Ways and Means Committee, which crafts tax legislation, would be involved. But Brady also appears to be out of the loop.

Several days after Trump first mentioned the tax cut, Brady released a vague statement praising previous GOP tax legislation and promising to “continue to work with the White House and Treasury over the coming weeks to develop an additional 10 percent tax cut focused specifically on middle-class families and workers.” Translated: No actual work has been done on the plan—presumably because Brady, like everyone else, had no idea what Trump was talking about.

Even Trump himself does not appear to know much about his proposal. Although he has repeatedly described it as a middle-class tax cut, he could not explain to The Wall Street Journal how “middle class” would be defined. (“Well, we’ll define it. We’ll have to—we’ll have to define that. I mean, there is a definition, but we’ll make sure the definition is right.”) He also insisted, again, that a resolution vote would occur shortly, saying, “[T]his would be a resolution, because they’re out, but we’re doing the resolution now,” and then had to be reminded that the resolution would not be possible until Congress returned to session. (Trump also strongly implied he has already been working with Brady on the plan for a long time, which, given Brady’s details-free statement about working on the plan in the “coming weeks,” strains credulity.)

In short: Neither Trump nor anyone associated with him can explain his plan, because a plan does not exist.

Which is perhaps to be expected from a president whose personal image and professional career were built largely on flim-flam. Even still, the episode neatly encapsulates the utter brokenness of the policymaking process in the Trump administration, and the ways in which Trump’s penchant for blustery nonsense makes that already chaotic process worse.

In a normal White House, under a normal president, this state of affairs—a president repeatedly making obviously false promises about a forthcoming policy that neither he nor anyone who works with him can explain—would be incredibly embarrassing. But Trump’s staff and Republicans in Congress appear resigned to this sort of thing as an unavoidable consequence of the president’s character. The people who work with Trump have, for the most part, simply accepted that he is ignorant and unreliable.

And Trump, who has continued to tout the supposed tax cuts throughout the week despite how obvious it is that they are an election-season ruse, appears perfectly comfortable with the situation. Although he often assails the media for producing fake news, which often refers to news reports that are true but unflattering, he is happy to spread fake news himself.

If anything, this appears to be Trump’s comfort zone. He seems more willing to talk about his fake tax plan, which has no details to worry about getting wrong, and which exists as a pure policy hypothetical with no tradeoffs to be questioned, than most of the real domestic economic policy proposals his administration and Republicans in Congress have actually pursued. Trump’s middle class tax cut is an imaginary plan from a president who prefers fake policy to the real thing.