The Trump administration has been a dream come true for hawks in Washington — particularly those harboring fantasies of vengeance and retribution against Iran. Under Trump, the U.S. unilaterally pulled out of the nuclear deal signed by President Barack Obama and has begun a “maximum pressure” policy of sanctions and political isolation targeting Iran. The confrontation that began escalating after the U.S. withdrawal from the nuclear accord was punctuated last month by the assassination of Iranian Gen. Qassim Suleimani in a drone strike — an attack that was publicly claimed by the United States.

It’s unclear where all this is headed, but for many Trump administration figures, there seems to be an ideal outcome in mind: regime change. The United States has succeeded in recent decades in using force to topple governments in places like Iraq and Libya. Iran, however, is a country of 80 million people, many magnitudes the size of either of those examples. And a direct U.S. military intervention in Iran seems off the cards, even in the most lurid neoconservative fantasy.

Lacking the ability to win through overt war, the U.S. settled on a policy of making Iran as ungovernable as possible through sanctions and other forms of pressure, hoping that this leads to an uprising that topples the government and, presumably, ushers in something better. Yet this approach looks likely to make life as miserable as possible for ordinary Iranians while failing to create political change in their country.

“Iran more clearly resembles the recent American experiences in the Middle East like Libya and Iraq than it does the Soviet Union in 1989,” said Richard Hanania a fellow at Columbia University’s Saltzman Institute of War and Peace Studies. “If you’re calling for regime change in Iran, you’re basically calling for civil war. As in other countries, even if the leadership falls, remnants of the old regime are going to be able to organize no matter what.”

In other words, there is no hope for a tidy regime change in Iran spurred on by the U.S. The future that Washington’s hawks, now at the helm of American foreign policy, are advocating for looks likely only to achieve more chaos, more strife, and more instability in Middle East — and that’s only on the outside chance that regime change succeeds at all. 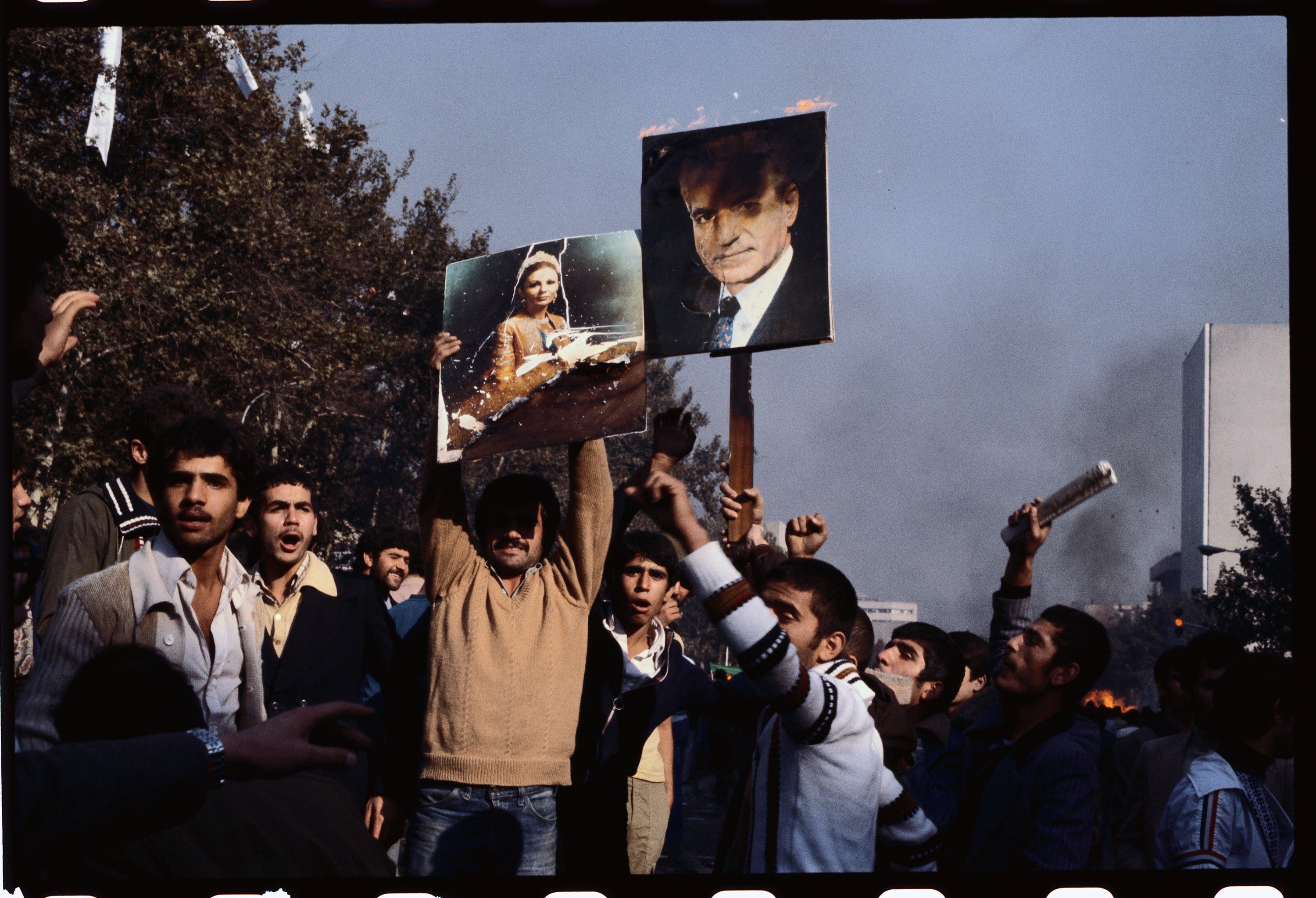 In January 1979, men protest against the government of Shah Mohammad Reza Pahlavi.

The last revolution in Iran turned out to be an exception that proves the rule. When anti-government protesters took to the streets of Iran in 1979 against Shah Mohammad Reza Pahlavi, the monarch ultimately chose to go into exile rather than fight to the death to keep power, even as some of his American advisers were arguing for a massacre. The current regime in Tehran, on the other hand, has evinced no willingness to back down in the face of public pressure. Like many revolutionary governments, the Islamic Republic has arguably proven more brutal than the monarchy it replaced. The ruling clerics have repeatedly put down protests over the past four decades, killing and jailing thousands in the process.

All this puts advocates of regime change in a difficult position. If the Iranian government is willing to fight to the death to hold onto power, any attempt from outside to engineer its collapse will inevitably lead to bloodshed, potentially to the point of driving the entire country into chaos. Worse still, such a policy could kill hundreds of thousands, maybe millions of Iranians, while still failing to change the regime.

Even if Iran’s leadership were somehow removed from the picture, there would still be hundreds of thousands of paramilitaries and Revolutionary Guards loyal to the regime spread across Iranian society. These armed and well-trained fighters would be a decisive factor in whatever happened in the country after the collapse of the central government. Recent events have shown that Iranian society is in fact quite divided, yet public opinion cannot gauge what rapidly evolving politics borne out of civil conflict might look like.

“Looking at dueling protest videos on Twitter is a terrible way to try and predict what could happen in Iran,” said Hanania. “If the government falls, you probably won’t get liberals or moderate Islamic democrats in power, which is what most of the population likely wants. You’re going to get the people who are the best at carrying out organized violence.”

Another major obstacle to regime change is the nature of the Iranian opposition. Organized political opposition inside Iran has been repressed for years, while groups outside the country have been made irrelevant by decades of exile. An internal challenge to the regime that arose during the 2009 Green Movement was put down with force, and its leaders are still languishing under house arrest. No significant domestic opposition groups or parties today are permitted to exist. The situation of the exiles looks even less promising. The son of the last shah has been promoted in D.C. for a possible future role in Iran, but the evidence of his support on the ground in that country is limited. Another opposition organization in exile is the Mojahedin-e-Khalq, a cult-like group with a history of violence that seems to be even less popular inside Iran than the government.

This lack of any organized opposition makes it difficult to envision the type of mass movement that overthrew the shah in 1979. That movement included leftists, liberals, and moderate Islamists. But it also enjoyed powerful symbolic support from Ayatollah Khomeini, who had a popular following in Iran even during the years he spent exiled in Iraq and France. After the regime fell and street fights broke out between revolutionaries with different vision for Iran’s future, Khomeini returned to the country with enough legitimacy stored up to marginalize his opponents and take control of the situation. The clerical regime that he created has defied many predictions of its demise in the decades since. Despite the best efforts of the United States, the Gulf Arab states, and Israel, Khomeini’s republic continues to rule Iran to this day.

Given the apparent mismatch between its dreams and its abilities when it comes to regime change, it’s possible that the Trump administration is pursuing a subtler policy towards Iran. Top administration officials have recently begun promoting the idea of a new agreement with Iran to replace the Obama-era nuclear deal. The odds of this offer being serious are unlikely. The nuclear deal was a complex undertaking that took years of negotiations to conclude. It was particularly sensitive due to the history of distrust between the two sides. Rather than a serious offer of talks, the Trump administration is simply seeking diplomatic cover while ramping up its own covert and overt actions against Iran.

“My sense is that the people who are executing this policy are more interested in weakening in Iran and causing instability and disruption in the country that will reduce the threat it poses, rather than paving the way to a negotiated off-ramp through diplomatic means,” said Ellie Geranmayeh, a senior policy fellow at the European Council on Foreign Relations. “The fact that [U.S. Secretary of State Mike] Pompeo prevented [Iranian Foreign Minister Javad] Zarif from coming to New York for a United Nations meeting is further indication that they’re not really interested in any diplomatic track.”

“The people who are executing this policy are more interested in weakening in Iran and causing instability and disruption.”

For the remainder of Trump’s term — as well as his next term, if reelected — we can expect an intensification of the undeclared U.S. war with Iran. There will be more sanctions, more military actions against Iranian-backed proxies in the Middle East, and more political pressure against Iran in international forums. We might also see the intensification of a troubling new phenomenon: the targeted killing of Iranian leaders.

As more information about the circumstances of Suleimani’s recent assassination has come to light, legal experts are raising alarms about the illegality of assassinating a high-ranking official of a foreign government. The lines between who can legally be killed outside of a formal declaration of war have been further blurred by the brazen killing ordered by Trump. The nebulous practices of the so-called global war on terrorism used to be defended as a way of targeting nonstate militants. With the killing of Suleimani, however, that war has been extended to states as well. The consequences of these shifts — in a world where drones and other means of remote killing are rapidly proliferating — are frightening to consider.

All things considered, the extent to which the Trump administration considered or even cared about such questions is probably limited. In pursuing an aggressive policy towards Iran with no obvious objective, Trump has now extended the most controversial counterterrorism practices of the post-9/11 era to a dangerous new frontier. The law of war might then become just another casualty along the way.

“Applying the view of terrorism to a state actor destroys the notion of sovereignty, international law, and the distinction between war and peace,” said Stephen Wertheim, the deputy director of research and policy at the Quincy Institute. “We can’t even say for sure right now if we’re at war with Iran or not. But we may look back in the future and realize that the war started with the assassination of Suleimani.”

Trump Tests Positive for Coronavirus, 48 Hours After Mocking Biden for Wearing a Mask

How the Pandemic Exposed the Failures of Capital Punishment

America’s Half a Century of War in Somalia Comes to an End. Sort Of

The Fight for Reproductive Justice in a Post-Ginsburg World