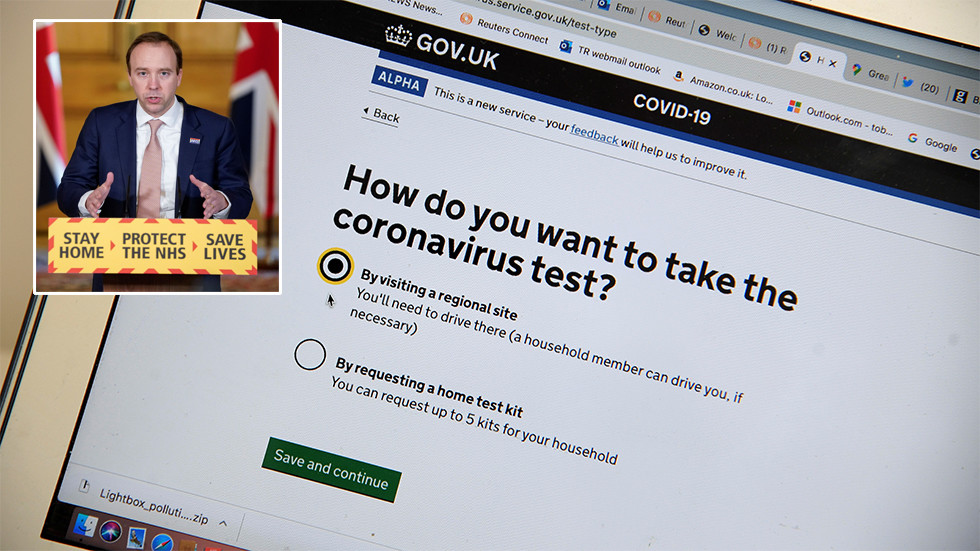 In its scramble to hit the target of 100,000 Covid-19 tests a day by the end of April, the UK government has revised the way it counts them, the Health Service Journal (HSJ) reports. UK health officials deny the claim.

A test would previously only have been counted in its tally once the sample had been processed in a laboratory, but that’s changed in the past few days, a senior source told the HSJ.

It’s alleged that the Department of Health and Social Care is now also including in its official numbers those tests that have simply been mailed out, regardless of whether the sample has been returned by the recipient.

We’re now counting a home test as tests which have been sent to people’s homes.

HSJ reports that up to 50,000 of the tests that will be registered as having taken place by the landmark date of April 30 will actually only have been mailed. That figure will also include those home tests that recipients have merely agreed to receive in the randomized trial being undertaken across England.

Matt Hancock, the health and social care secretary, had become “obsessed” with reaching the 100k target, according to an unnamed senior source quoted by HNJ, who added that work to achieve this goal had been “manic.”

Speaking at the government’s daily coronavirus press briefing on Friday evening, Hancock announced that the target had been met – with 122,000 tests recorded in the 24-hour period up to 9am local time Friday.

The health official charged with overseeing the government’s testing plan, Professor John Newton, director of health improvement for Public Health England, responded to the HSJ report by denying any change has been made to the manner of counting tests. Speaking alongside Hancock at Friday’s briefing, Newton insisted it has always been the case that tests mailed out were included in the count.

The shadow health secretary, Jonathan Ashworth, criticized Friday’s test-results announcement by Hancock, maintaining that the tally cited should not have included tests that had been merely mailed out and should have comprised only those that had actually been conducted.

“Tonight’s headline figure shouldn’t count tests that hadn’t been used, or indeed, might never be used as a completed test,” Ashworth said.

Hancock set the ambitious target on April 2, after the government had come in for widespread ridicule for its comparatively low testing levels, with many critics naming the likes of Germany and South Korea as examples of nations demonstrating best practice in battling the deadly virus.

The latest figures released by the Department for Health and Social Care show the Covid-19 death toll in the UK rising to 27,510 – by 739 in the last 24-hour period recorded.

On Wednesday, UK authorities finally started to include in their data those deaths that have occurred in places other than hospitals, such as care homes, resulting in a massive spike in Covid-19 mortality numbers.