Observers from the Organization for Security and Co-operation in Europe (OSCE) monitor a polling place in Washington, D.C. during the… 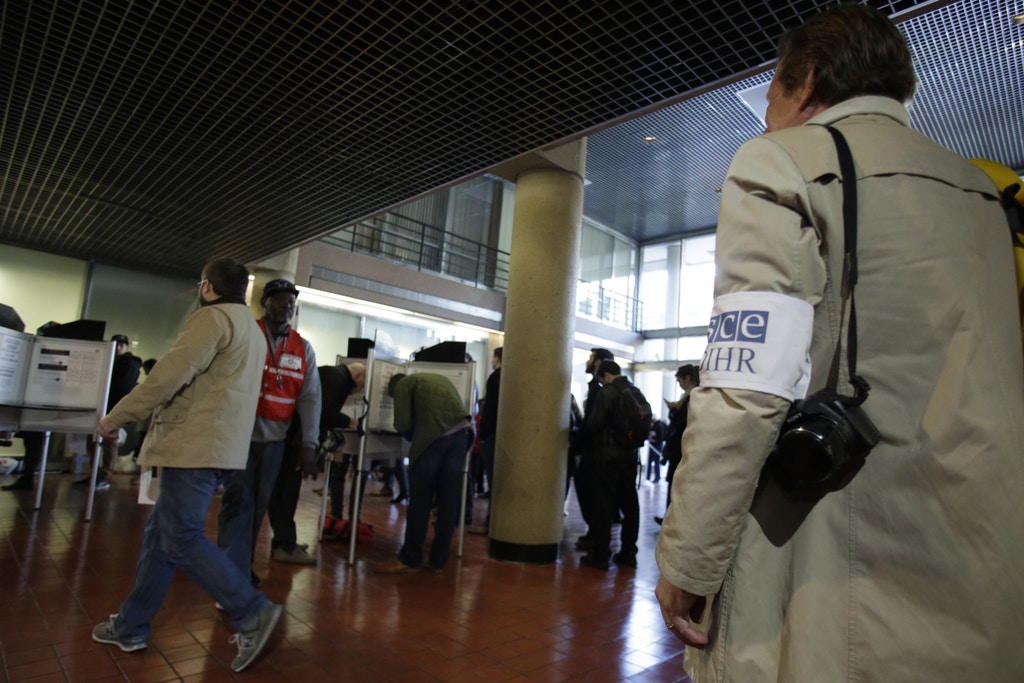 Observers from the Organization for Security and Co-operation in Europe (OSCE) monitor a polling place in Washington, D.C. during the presidential election on November 8, 2016.

Perhaps we should consult with the experts. Few Americans have heard of the Organization for Security and Cooperation in Europe (OSCE); even fewer are aware that OSCE observers have been keeping tabs on U.S. elections since 2002, at the invitation of the U.S. State Department.

On October 26, the OSCE’s Office of Democratic Institutions and Human Rights in Washington D.C. issued an interim report on the 2018 midterms. It didn’t make for pleasant reading. “The right to vote is subject to many limitations,” warned the report, “with racial minorities disproportionately impacted.”

This isn’t the first time the OSCE has sounded the alarm. In the wake of the 2016 presidential race, OSCE observers praised the U.S. for holding a “highly competitive” election while also criticizing a campaign “characterized by harsh personal attacks, as well as intolerant rhetoric” and changes to election rules that “were often motivated by partisan interests, adding undue obstacles for voters.”

“Suffrage rights,” the 2016 observers concluded, were “not guaranteed for all citizens, leaving sections of the population without the right to vote.”

Is that what a free and fair election is supposed to look like? It should be a source of shame that the United States, once held up as a model to emerging democracies around the globe, now needs outside observers to remind it of its most basic democratic obligations. The OSCE mission to the U.S. began in 2002, in response to the “serious shortcomings” in the 2000 presidential election, which saw tens of thousands of black voters in Florida purged from electoral rolls and prevented from voting.

But have these international observers succeeded in nudging the U.S. in a more democratic direction? Not quite. The OSCE’s final report on the 2016 presidential election issued a series of recommendations to U.S. officials, including:

* “To meet requirements regarding the equality of the vote, states should consider the establishment of independent redistricting commissions to draw district boundaries free from political interference.”

* “Election officials at the state and county level should be released from their duties if they are candidates in elections.”

* “Restrictions on voting rights for persons with criminal convictions should be reviewed to ensure that all limitations are proportionate.”

* “Authorities should review existing measures to further reduce the number of unregistered voters, including addressing undue obstacles and burdensome procedures faced by marginalized sections of the population.

* “States should refrain from introducing voter identification requirements that have or could have a discriminatory impact on voters.”

Two years later, none of these recommendations have been acted on by U.S officials, either at the federal or state levels. On the contrary, at least nine states have brazenly enacted further restrictions on voting since the 2016 election which have had a clear “discriminatory impact” on voters.

We shouldn’t be surprised. Since 2000, the story of the Republican Party’s approach to elections, in fact, is one of racist voter suppression; of targeting minority voters with “almost surgical precision,” to borrow a line from the 4th U.S. Circuit Court of Appeals. And Republicans are equal opportunity vote suppressors. They have disenfranchised and purged people of color from a wide range of communities, across a wide range of states. “No child left behind” was the name given to Republican education reforms in the era of George W. Bush. “No minority left behind” could be the tagline of Republican voter suppression efforts in the era of Donald Trump.

Native Americans? Check. In North Dakota, where Democrat Heidi Heitkamp won her Senate race in 2012 by a razor-thin margin of <3,000 votes, six in ten Native Americans — who tend to lean Democratic — live on reservations and lack street addresses. In 2013, the state’s Republicans passed a law requiring voters to present identification that displays a street address, which was upheld by the Republican-led Supreme Court in October.

African-Americans? Check. In Georgia, where Republican Brian Kemp and Democrat Stacey Abrams are locked in a tight race for the governor’s mansion, an Associated Press investigation in October found 53,000 voter registrations were on hold, of which “nearly 70 percent” were black.

Latino Americans? Check. In Dodge City, Kansas, which is 60 percent Latino, Republican officials moved the town’s sole polling station “to a tough-to-access location outside the city limits.” Voters, literally, have to “get out of Dodge” in order to cast their ballots on Tuesday.

Incidentally, to make matters worse, in both Georgia and Kansas, the Republican secretaries of state, in charge of the election process, are also running as the Republican candidates for governor.  Thus their Democratic opponents, in the words of Rolling Stone’s Jamil Smith, are “competing against a rival who is also the referee.” So much for elected officials being “released from their duties if they are candidates in elections,” as per the OSCE’s 2016 recommendation.

The United States is in dire need of election observers. Such observers, according to Duke University’s Judith Kelley, “can – under some conditions – lead to improvements in conduct and quality of elections.”

Domestic observers, however, are few and far between — especially since a 2013 Supreme Court ruling gutted the Voting Rights Act and “severely curtailed” the Justice Department’s power to deploy federal election monitors to states with a history of racial discrimination. As a result, the 2016 presidential election saw one of the smallest deployments of domestic observers since 1964.

Meanwhile, international observers — in the form of the OSCE, which has spent the past 20 years observing more than 300 elections in 56 countries — are subject to a host of constraints on U.S. soil.

For a start, as it’s the midterms, the OSCE mission is miniscule. It features a “13-member core team” based in Washington, D.C. and only “36 long-term observers deployed throughout the country.”

Second, contrary to the hysterical claims from some conservatives, they are OSCE observers, not United Nations monitors. As the Atlantic’s Uri Friedman has observed, “the difference is that observers don’t intervene in the political process,” so OSCE observers have to report voter complaints “to U.S. authorities rather than taking action themselves.”

Third, as the OSCEs interim report revealed in October, “several state political and electoral authorities have declined to meet with… observers,” while “explicit restrictions on observation of voting by international observers are in place in 18 states.” And guess what? The majority of those 18 states have introduced “significant voter restrictions” since 2010, according to the Brennan Center for Justice.

Despite OSCE-participating states, including the United States, agreeing in 1990 to allow each other to observe elections, on the basis that such observers “can enhance the electoral process,” individual U.S. states can and do have the power to block international observers from… observing. In 2012, Texas Attorney General Greg Abbott even threatened OSCE observers with criminal prosecution for violating state law.

The problem is that the U.S., plagued by rampant voter suppression and partisan election officials, is far from a healthy or vibrant democracy. These days, as the midterms once again remind us, it’s more of a banana republic.