Venezuela’s President Nicolás Maduro has closed the border with Brazil amid a row over humanitarian aid. The embattled leader said… 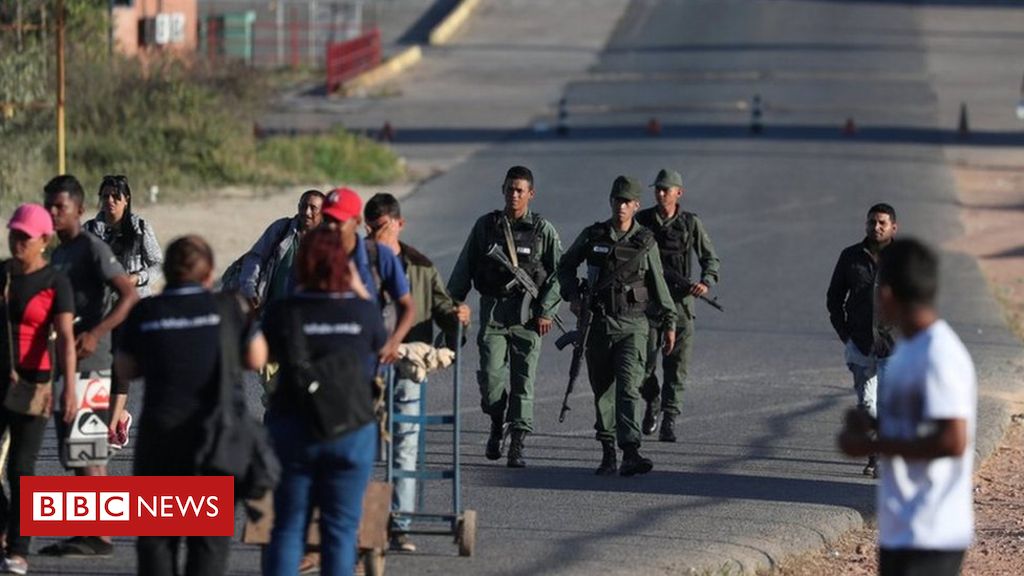 Venezuela’s President Nicolás Maduro has closed the border with Brazil amid a row over humanitarian aid.

The embattled leader said he could also shut the key border with Colombia to stop the opposition bringing in relief.

His ally Russia has accused the US of trying to arm Venezuela’s opposition.

Rival concerts will be held on both sides of a bridge linking Venezuela and Colombia later on Friday.

On the Colombian side, an event will be held to raise money for Venezuela. At the same time, Mr Maduro’s government will hold its own concert, just 300m (980ft) away.

Opposition leader Juan Guaidó and his allies hope to collect food and medicine being gathered in neighbouring Brazil and Colombia on Saturday, in defiance of President Maduro.

Head of the National Assembly, Mr Guaidó declared himself interim leader during anti-government protests last month and is recognised by dozens of countries, including the US and most Latin American nations.

The border crossing with Brazil remained closed on Friday morning but local G1 website reported that a group of Venezuelans managed to cross from the Brazilian city of Pacaraima on foot using an unofficial route.

Mr Maduro announced on Thursday that the border would be closed “completely and absolutely” until further notice and said he had been considering a “total closure” of the border with Colombia.

Brazil had earlier said that, in co-ordination with the US, food and medicine would be available to be collected by “the government of acting President Juan Guaidó in Venezuelan trucks driven by Venezuelans”.

How the story unfolded

Colombia border: Battle of the bands

British entrepreneur Sir Richard Branson has organised a concert near the Tienditas Bridge crossing at Cúcuta hoping to raise about $ 100m (£77m) to buy food and medicine for Venezuelans.

Venezuela Aid Live, he said, has been organised at the request of Mr Guaidó and another opposition leader, Leopoldo López, who is under house arrest. About 250,000 people are expected to attend.

The Venezuelan government has erected a stage on its side of the crossing for its Hands Off Venezuela event.

More than three million Venezuelans have fled in recent years as the country grapples with hyperinflation and shortages of essential goods, the UN says.

Despite denying there is any humanitarian crisis, Mr Maduro announced this week that 300 tonnes of aid would be shipped from its ally Russia.

Meanwhile, Russia’s foreign ministry spokeswoman Maria Zakharova said the attempt to deliver aid could spark violence and be used as a pretext by the US to remove Mr Maduro.

Citing unspecified information, she also accused the US and its Nato allies of discussing how to arm the Venezuelan opposition and claimed US special forces and equipment were being deployed near the country.

There is no doubt this has become a political issue. Juan Guaidó and his supporters want to spread the word about how important the foreign humanitarian aid is. President Maduro accuses it of being a Trojan horse.

There is a feeling of optimism among many Venezuelans at the moment – an energy that has not existed in the country for a long time. And the hope that Saturday may be the start of a new path.

But if the stand-off drags on, the fear is that this positive energy that has revived Mr Maduro’s critics will wane, as will the interest of the international community, and that’s what Mr Guaidó needs to achieve regime change.

People want to know about a plan B – if indeed Mr Guaidó has thought of one. Otherwise, the hope here will soon turn to despair.

Mr Guaidó is leading a convoy that left the capital, Caracas, on Thursday, to Cúcuta, some 800km (500 miles) away.

He has said 600,000 volunteers have already signed up to help carry aid into Venezuela while the Venezuelan government said it would deliver 20,600 of its own food boxes to the Colombian border area.

Venezuela’s military has so far resisted calls to abandon Mr Maduro, in power since 2013.

However, former military intelligence chief Hugo Carvajal called on the military to break with the president and to allow aid in. In a video posted online, the congressman recognised Mr Guaidó as “president in charge” and issued a stinging rebuke to Mr Maduro.

“You’ve killed hundreds of young people in the streets for trying to claim the rights you stole – this without even counting the dead for lack of medicines and security.”

Mr Guaidó’s aides in Washington said 11 Venezuelan diplomats based in the US had defected and declared their support for him.