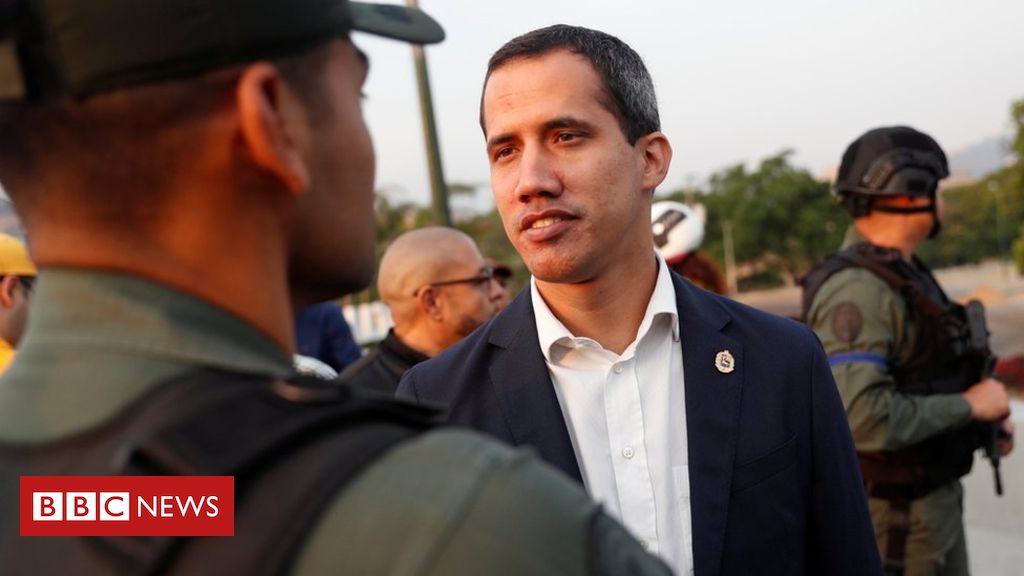 Venezuelan authorities say they are putting down a small coup attempt after opposition leader Juan Guaidó announced he was in the “final phase” of ending President Nicolás Maduro’s rule.

He appeared in a video with uniformed men, saying he had military support.

Mr Guaidó, who declared himself interim president in January, called for more members of the military to help him end Mr Maduro’s “usurpation” of power.

The military has generally supported Mr Maduro in the stand-off with Mr Guaidó.

However the opposition leader has backing from dozens of countries, including most of Latin America and the US.

But international opinion seems divided on the most recent developments in Caracas, where years of hyperinflation, power cuts, food and medicine shortages are fuelling growing anger.

What is the latest?

Mr Guaidó appeared in a three-minute video standing alongside another opposition leader, Leopoldo López, who has been under house arrest since being found guilty of inciting violence during anti-government protests in 2014.

Mr López said he had been freed by members of the military who had declared their loyalty to Mr Guaidó.

In the video, which was shared on social media, Mr Guaidó announced he had the support of “brave soldiers” in Caracas.

How the story unfolded

“People of Venezuela, let’s take to the streets… to support the end of the usurpation, which is irreversible… The National Armed Forces have taken the correct decision, they have the support of the people of Venezuela, and the backing of our constitution, they are guaranteed to be on the right side of history,” he said.

Mr Guaidó, the president of the opposition-controlled National Assembly, has been calling on the military to back him ever since he declared himself interim president.

He argues that President Maduro is a “usurper” because he was re-elected in polls that had been widely disputed.

The video appeared to have been recorded at dawn in or near La Carlota air force base in the capital Caracas.

The most dramatic moment yet

Events in Venezuela are uncertain and unclear but Mr Guaidó has seemingly gambled heavily in his latest bid for power.

The loyalty of the military to President Nicolás Maduro’s regime has been the central factor that has kept him in power. Barring a fundamental change in their allegiance or at the very least a significant split in their ranks, no amount of outside diplomatic pressure is going to push Mr Maduro from office.

So are we seeing this split now? Mr Guaidó and his supporters claim parts of the military across the country have backed him, but so far there is little evidence of this.

For Mr Guaidó the stakes are huge. The Venezuelan government says it is putting down a coup attempt. This is perhaps the most dramatic moment yet in Venezuela’s current political saga.

Footage recorded by Reuters news agency showed Mr Guaidó and Mr López with dozens of uniformed men on a highway in Caracas.

Many were wearing blue armbands and bandanas to signal their support for Mr Guaidó. The footage showed tear gas being fired at them.

Footage showed supporters of Mr Guaidó throwing stones at the airbase while others waved Venezuelan flags but their actions seemed to lack co-ordination.

Mr López, who leads the Popular Will party of which Mr Guaidó is a member, urged Venezuelans to join them: “All Venezuelans who want freedom should come here, disrupt order, join and encourage our soldiers, join our people. Good morning Venezuela, let’s do this together.”

His wife told the Guardian’s Joe Parkin Daniels that he had been released “to free Venezuela alongside Guaidó”.

According to news agency Reuters, Mr Guaidó has now left the bridge. It is unclear where he has gone.

How has the government reacted?

The Venezuelan Information Minister, Jorge Rodríguez, responded to the events on Twitter, writing that the government was confronting a small group of “military traitors” who, according to him, were promoting a coup.

Venezuelan Defence Minister Vladimir Padrino said that military bases were “operating normally” and that the armed forces were “standing firm in defence of the constitution and its legitimate authorities”.

A senior member of the governing socialist party, Diosdado Cabello, called on supporters of President Maduro to take to the streets around the presidential palace to defend Mr Maduro from “the right-wing conspiracy”.

“Every one of their actions will have an overwhelming response,” he said.

What is the international community saying?