While voters in San Francisco were saying yes to a huge (and possibly unconstitutional) tax increase, and while voters in… 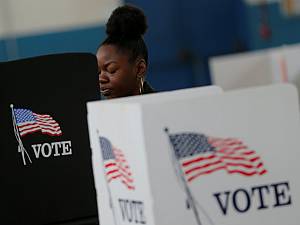 While voters in San Francisco were saying yes to a huge (and possibly unconstitutional) tax increase, and while voters in Maine were soundly defeating an income tax hike on high earners, voters in two southern states took big steps Tuesday to fend off future tax increases.

North Carolina voters approved an initiative to amend the state’s constitution to cap the income tax rate at 7 percent, down from the old constitutionally mandated cap of 10 percent. That won’t have any affect on the current income tax rates in North Carolina—the state has a flat income tax of 5.5 percent—but supporters say it’s a forward-looking measure that will force the growing state to live within its means in years to come.

In Florida, voters endorsed what could be an even more powerful tool for limiting the growth of government. More than 65 percent of the state’s voters said yes to Amendment 5, which changes the state’s constitution to require a two-thirds vote in both chambers of the General Assembly for any future increase in taxes or fees, rather than the simple majority previously required. The change effectively guarantees that Florida will retain its status as one of the lowest-tax states in the country for the foreseeable future—and is perhaps another sign that Florida is moving away from its longtime status as a swing state.

“North Carolina and Florida, two states that have enacted repeated rounds tax relief in recent years, are indicative of what conservative Republican policymakers can accomplish when in power,” says Patrick Gleason, vice president of state affairs at Amercians for Tax Reform, a conservative nonprofit that favors tax cuts. “Those low-tax, free market fiscal policies were affirmed by voters in those states.”

Indeed, both measures garnered widespread support. In Florida, Amendment 5 received more than 5.1 million yes votes. That’s more than 1 million more than any of the candidates for governor or senate who were on the ballot Tuesday.

There was no statewide election in North Carolina to measure the tax cap amendment against, but it got more than 57 percent of the vote despite opposition from Democratic Gov. Roy Cooper and a collection of special interests. The lead-up to the election featured a variety of scare tactics from opponents, who warned that schools would be underfunded and the state would be unprepared for an emergency such as a hurricane if it was unable to raise income taxes in the future—implying that politicians would be incapable of doing the basic budget-making task of determining priorities for spending.

The fact that North Carolina has any cap on income taxes was unusual to begin with. Georgia, where voters approved a constitutional cap of 6 percent in 2014, is the only other state with such a mechanism. Voter approval of the lower cap comes five years after the state legislature replaced a progressive tax system with a flat income tax. Under the previous system, the state’s highest-earning individuals and households paid 7.75 percent, so Tuesday’s vote is perhaps most significant for how it would forbid North Carolina lawmakers from returning to the old model in the future—or would at least require lower rates if they do.

In Florida, the two-thirds majority required to raise taxes will change the political calculus in Tallahassee. Future tax increases will likely have to be bipartisan in nature, but tax cuts could still be enacted with a simple majority. That’s “a wise and common sense policy” that will “preserve one of Florida’s most attractive assets: our low-tax climate,” according to the James Madison Institute, a pro-market think tank.

Amendment 5’s success was another political rebuke for the state’s Democrats. Democratic gubernatorial candidate Andrew Gillum had called for raising the state’s corporate income tax from 5.5 percent to 7.5 percent in order to spend more money on schools. Not only did he lose the election, but it will now be significantly more difficult for a similar policy to be enacted by a future governor—and, indeed, it changes how Democrats in particular will have to campaign at the state level.

That opponents of the measures in North Carolina and Florida leaned heavily on the idea that limits on future tax increases would harm schools is not really a surprise. Voters are generally unwilling to support tax increases, but many are interested in making sure schools are up to snuff. While special interests are happy to draw a connection between higher taxes, more spending, and better schools, the reality is that how much a state spends on education is only one factor in determining the effectiveness of a school system—as Stan Liebowitz and Matthew L. Kelly pointed out in a recent Reason cover story.

“Expenditures are not linked to student performance,” they conclude. “It turns out that throwing more money at something isn’t guaranteed to yield improvement.”

But it’s easier to throw more money at a problem when you have an unlimited supply of money. Limits like the ones adopted this week mean lawmakers will have to prioritize how to spend existing tax revenues without reaching deeper into residents’ wallets.