Washington, D.C. — On Wednesday, the Subcommittee on Capital Markets, Securities, and Investment (Committee on Financial Services) held a hearing they… 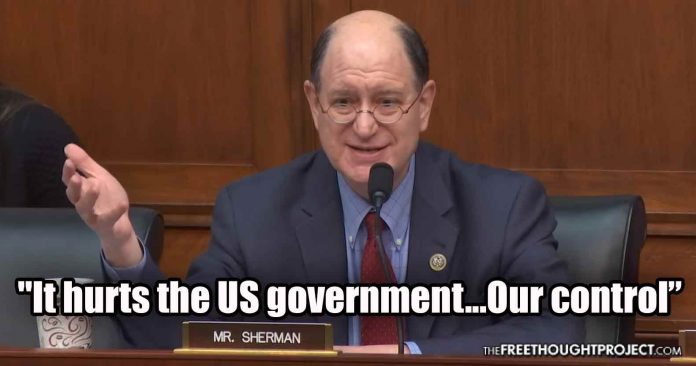 Washington, D.C. — On Wednesday, the Subcommittee on Capital Markets, Securities, and Investment (Committee on Financial Services) held a hearing they called “Examining the Cryptocurrencies and ICO Markets.” During this ostensible “examination,” banker-owned politicians used their time to fabricate and perpetuate outright lies and fear about cryptocurrencies. At one point in the discussion, however, one banker shill accidentally admitted the real reason government doesn’t like cryptocurrencies and the blockchain—it threatens their control over you.

During the two-hour-long hearing, there were many positive points made by well-informed politicians who understand the value in the blockchain and in cryptocurrency. However, one banker-funded shill, Representative Brad Sherman (D – CA) couldn’t have made his bias and ignorance on the matter any clearer.

“Cryptocurrencies are popular with guys who like to sit in their pajamas and tell their wives they are going to be millionaires. They help terrorists and criminals move money around the world. Tax evaders. They help startup companies commit fraud, take money, and one percent of the time they actually create a useful business,” Sherman said, attempting to ridicule and shame the millions of good people who choose to invest in blockchain technologies and cryptocurrencies.

But that was only the beginning. As Sherman continued, he would slip up during his sentence and reveal the real reason him and his cronies in Washington don’t want you to invest in the crypto world.

“It hurts the US government in two ways,” Sherman said. “Our contr….” Sherman slips, about to fully admit that the government is scared of crypto because they cannot “control” you with it.

Although he mostly came right out and said it, Sherman then clarified what he started to say by noting how the US government essentially uses the dollar as a weapon around the world and domestically to force their control.

The dollar, as Sherman correctly states, is used to “impose sanctions” (aka acts of war) and “stop tax cheating” (making sure the government can get every dime possible off the backs of its citizens).

Watch for yourself below as this banker shill makes this bombshell admission.

Calling Sherman a banker shill is not an exaggeration either. When we look into who is financing his campaigns, it becomes entirely clear as to why this man is taking to the podium to perpetuate lies about the blockchain.

One of Sherman’s top contributors for 2017-2018 was Allied Wallet which is a global payment gateway for government-backed fiat. They are directly threatened by the far more efficient and far more private payment systems that exist using blockchain technology which explains why they have their puppet shaming people for using it.

It is also no coincidence that the top industries funding Sherman are all Securities and Investment firms which make up the bulk of his campaign income.

The good news is that Sherman is a dinosaur. While the hearing appeared to be split down the middle over their perceptions of the blockchain, some members gave heartening testimonials as to what’s to come.

Rep. Tom Emmer, a member of the Congressional Blockchain Caucus, made the fear-based opponents of this revolutionary technology look like the shills they are.

“I tend to trust people and believe that they’re in these things for good, and that they’re trying to improve their own lives and hopefully the lives of people around them — that old adage that a rising tide lifts all boats. And yet I hear elected officials who don’t have any concept of what we’re dealing with here and how exciting it is, talking about how we got to regulate and create more government infrastructure. I respectfully disagree that that won’t act as a wet blanket on this amazing new technology. I realize there has to be some regulation, but there’s got to be balance,” Emmer said.

And he is correct. Blockchain technology is already and already has been changing the world for the better. One coin, in particular, DASH, is bringing commerce to poor countries in Africa and South America while at the same time funding alternative media projects to make sure the establishment is not able to maintain their grip on the flow of information.

Anonymous donors are funding breakthrough science that government would never support and donating millions to charities—all because of the blockchain—hardly the work of “terrorists and money launderers.”

.@RepTomEmmer: Lawmakers should keep in mind the power of #blockchain to empower people all over the world… and the potentially life-saving applications for #healthcare, #food safety and more in the US. #DCBlockchainpic.twitter.com/OYKXW2sT2I

Make no mistake, those who are threatened by cryptocurrencies are not that way because they want to protect you from terrorists or poor investments. One need only look at the megabanks who are caught laundering money for terrorists all the time and never face consequences. These same banks are also caught in massive schemes designed to rip off their customers, stealing billions in the process, and no one ever goes to jail.

Like Sherman admitted in the video above, the establishment is scared of the blockchain because it gives control—using radical transparency instead of government secrecy—back to the people.