Spread the love      Tweet    Austin, TX — A video from July 4 in downtown Austin has sparked outrage… 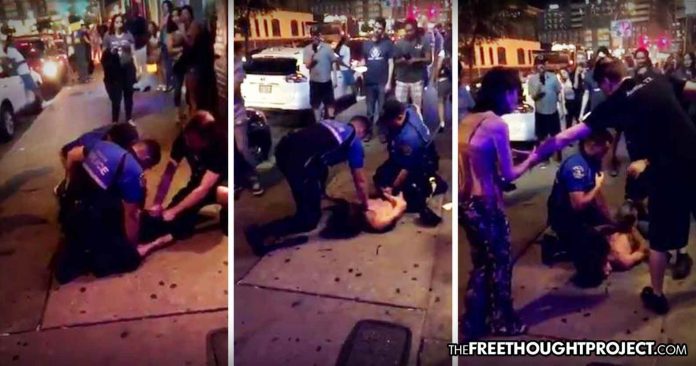 Austin, TX — A video from July 4 in downtown Austin has sparked outrage and an internal investigation after it showed two Austin police officers holding a man down and punching him in the head during a violent arrest.

The video was taken by Patrick King who described the incident as disturbing and pointed out noted that this was his first time seeing police brutality. King said that he was out with some friends when all of the sudden these two officers took down a man half their size.

“I’ve never seen something like this in front of me before,” King said.

As the video begins, the officers had already been struggling with the man. They are screaming at him to put his hands behind his back and to “roll over.” However, it appears he is unable to do so because they are holding him down and punching him.

“How in the actually F**K can you tell someone to put their hands behind their back and stop resisting arrest when you’re literally sitting on his body and holding him not giving him the chance to move?!” King wrote on Twitter.

A young woman near the officers is begging them to stop hitting the man. She becomes so distraught that she actually jumps in to stop it and touches one of the cops.

“You need to back the f**k up or you’re going to go to jail,” screams the cop as he continues to beat the man on the ground.

Once the officer got off of the man, they were able to roll him over and place him in handcuffs. The woman then asks, “why are you doing that?” to which the officer responds by getting up and telling her to put her hands behind her back.

King noted that watching police brutality in real life is far different than watching it on television or the internet. He says he posted the video to Facebook and Twitter to raise awareness.

Once the video began to go viral, Austin Police Chief Brian Manley actually tweeted it out himself and explained that they are looking into the incident.

“Thank you for bringing this video to our attention and allowing us time to look into the incident. As is standard protocol, the officers chain of command is reviewing all details surrounding this incident,” Manley said.

Thank you for bringing this video to our attention and allowing us time to look into the incident. As is standard protocol, the officers chain of command is reviewing all details surrounding this incident. https://t.co/bum5XKMAkC

The video above appears to be the result of what happens when police are trained to be warriors instead of guardians and see the public as an enemy they are at war with.

As TFTP reported last month, whistleblowers from within the Austin police department’s training program quit because they said cops are being taught to view the public as “cockroaches” they need to defeat.

Summer Spisak, a 38-year-old former tech employee who participated in nine weeks of the eight-month academy last year, said instructors told her and other cadets they would “punch them in the face” if they said they wanted to be police officers to help people.

Spisak and others are now sounding the alarm for the public, saying police are being trained to view community members as the enemy and not as their fellow citizens. “It’s so different from what is portrayed…It’s so different from my expectation of the Austin Police Department,” Spisak concluded.

KVUE continued by describing another former recruit’s observations of the police training currently being implemented at the Austin PD:

Jonathan Murray, who now works in sales for Dell, said instructors repeatedly degraded the homeless and prostitutes, referring to them as “cockroaches” and suggesting they “find a transient” if they were bored and wanted a felony arrest.

Viewing sex workers as insects and the homeless as potential targets for prosecution differs vastly from the generalized public perception of officers as those who are sworn to “protect and serve” members of the community. According to the former recruits, officers of the peace should have a “guardian” mentality as opposed to the “warrior” mindset the recruits and graduates are being taught to possess.

However, as the video above illustrates, that is not the case.

Who Helped Biden Rip Us Off At The Gas Pump?