Spread the love New York, NY — Multiple videos of people dumping water on cops have taken the internet by… 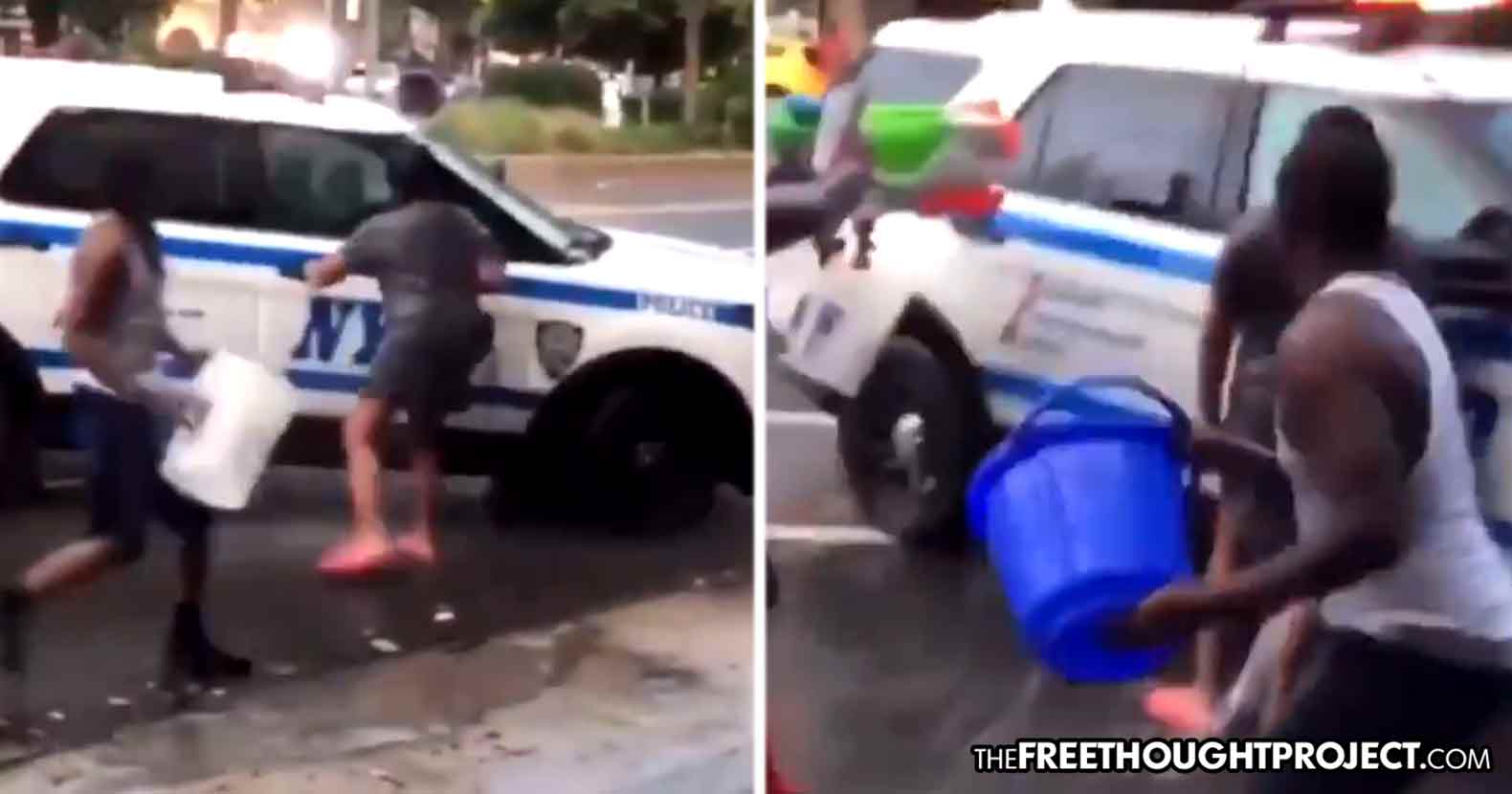 New York, NY — Multiple videos of people dumping water on cops have taken the internet by storm recently with some police supporters calling for the offenders to be killed. Despite not doing anything at the time, last week, police began arresting the people seen in the videos for dumping water on the officers. Another video has surfaced, however, that shows dozens of men harassing and dumping water on a woman — who is begging police to help her — but is ignored.

According to police, one of the men in the now-viral video seen dumping water on officers was 24-year-old Robert Perez. On Friday, Perez was arrested in connection with the drenching of two police officers by a crowd with buckets of water on Sunday in the Bronx. The incident on East 173rd Street and Boston Road in the Bronx was captured on cellphone video, according to NBC New York.

Perez has since been charged with harassment, criminal mischief, disorderly conduct and criminal trespass. After his arrest, police released images of 10 more people wanted in connection with the water incident. The images led to the arrest of three more people, Courtney Thompson, Isiah Scott and Chad Bowden, all 28, and all face charges similar to Perez.

The video of the officers getting drenched by a crowd of people sent shock waves through the media. Because water can’t really hurt someone, the debate over what should happen to people who dump it on cops raged. Then, on Friday, we saw how the police felt about it when they began making arrests.

However, with the surfacing of this new video, we see how police react when innocent women face the same treatment of having water thrown on them. Cops who watched a dozen men dump massive amounts of water on an innocent woman made no arrests, no interventions, and didn’t even make a remark over their loud speaker to ask them to stop.

As the video shows, the woman is attempting to ask the police for help. She tells the crowd of men to get away from her before they grab buckets full of water and began throwing them at her. After the first bucket is thrown, the woman tries to get in the car with the cops to get away from the water, but they refused to unlock the door.

For several moments, the officers simply watch as more than a dozen men harass and douse a woman with water. They did nothing to try to stop it. Would they have reacted similarly if the men were beating or raping the woman?

Some of the comments on the video attempt to justify the actions of the men by claiming the woman was calling the police on them for playing in the water. However, we do not know that. Also, some of the comments say that some women have been harassed in a similar manner and had water thrown on them for merely walking down the street.

Regardless of their intent, this woman was surrounded by dozens of strangers who were all harassing her and the police did nothing. So much for protect and serve.

But this should come as no surprise to our readers, who likely know that cops have no legal duty to protect citizens.

The leading case on the topic is Warren v. District of Columbia, 444 A.2d 1 (D.C. Ct. of Ap., 1981) when the Court stated that the “fundamental principle of American law is that a government and its agents are under no general duty to provide public services, such as police protection, to any individual citizen.”

In that case, police were directly alerted by Carolyn Warren, Miriam Douglas, and Joan Taliaferro that they were being held hostage by Marvin Kent and James Morse. Warren called police twice. But police never intervened and Warren, Douglas, and Taliaferro were held captive, raped, robbed, beaten, forced to commit sexual acts upon each other, and made to submit to the sexual demands of Kent and Morse—for over 14 hours.

The appellants argued that because police were alerted—twice—that police had a specific duty to protect them from the harm to which they were alerted. However, the court ruled in favor of police following “the well-established rule that official police personnel and the government employing them are not generally liable to victims of criminal acts for failure to provide adequate police protection.”

On top of this case is another from the Supreme Court dating back to the 1930’s which established the guidelines for federal government protection of citizens. In short, there is none. In the case of Erie Railroad Co. Vs. Tompkins, 304 U.S. 64, 82 L.Ed. 1188, the Court stated “there is no federal general common law. Congress has no power to declare substantive rules of common law applicable in a state whether they be local in their nature or ‘general,’ be they commercial law or a part of the law of torts. And no clause in the Constitution purports to confer such a power upon the federal courts.”

In fact, the only case establishing that police have a duty to protect individuals states that those individuals must be under direct responsibility of police at that time — as in prison.

In the case of DeShaney v. Winnebago County Department of Social Services (109 S.Ct. 998, 1989; 489 U.S. 189 (1989)), the court in DeShaney held that no duty arose as a result of a “special relationship,” concluding that Constitutional duties of care and protection only exist as to certain individuals, such as incarcerated prisoners, involuntarily committed mental patients and others restrained against their will and therefore unable to protect themselves.

To be clear, these precedents were set in these cases—not to protect coward cops who refuse to help innocent woman or stop school shooters—but because police cannot be in all places at all times and therefore cannot be held liable for a person sustaining harm just because police failed to act.

This case and many other should help to shed light on the idea that police “protecting” you is a misconception. Police will seldom prevent violence because they are usually not there, and even when they have the chance and fail to act, they have not strayed from their duty.

The average response time to a 9-1-1 call is 10 minutes nationwide; for poor areas, that time quadruples. In some cases, the dispatchers do not even take the caller seriously and the victim ends up dead when a crime could have actually been prevented.

The reality is that police exist to enforce the law only.

In a perfect world, police would show up prior to a crime and stop it, or at least during a crime, but this is simply not a reality most of the time. If there were enough cops to stop all crimes, this would require an Orwellian 1984 scenario with the state surveilling all citizens, all the time. While this would likely stop most of the crime, the conditions required to do so would be a living hell.

We need only look at prisons to see how even under the direct care of law enforcement, crimes, neglect, murders, and rapes, all still take place. No one in their right mind would ever want to live under such conditions in a free society.

What State and Local Governments Can Learn From the Coronavirus Crisis