Indianapolis, IN — When your only tool is a hammer, everything around you, even medical emergencies, begins to look like… 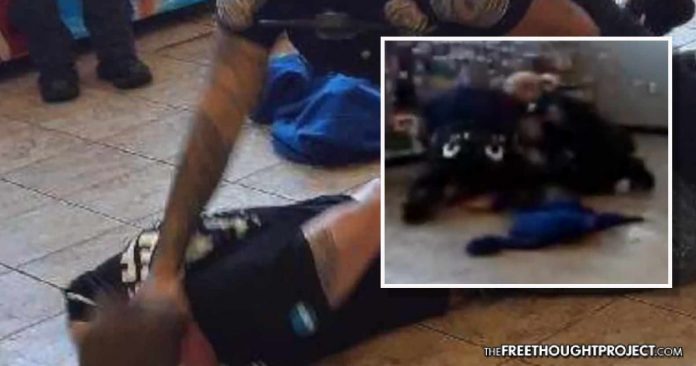 Indianapolis, IN — When your only tool is a hammer, everything around you, even medical emergencies, begins to look like a nail. As the video below illustrates, police who are only trained to use violence, made a bad situation worse when they responded to a call about a man who was having a seizure.

A family is outraged after watching cellphone footage of their son and brother being savagely beaten by Indianapolis Metropolitan Police officers during a medical emergency.

The victim, Christopher Knox, who is an epileptic, suffered a seizure while shopping in a Speedway gas station last week. For those unfamiliar with epileptics, often times during and after seizures, they can become severely disoriented.

“Officers might react to a person’s dazed behavior, inability to obey directives, and combative response to restraint as actions that the person can control,” the website for the law enforcement accreditor CALEA reads. “In fact, when a person with epilepsy has a seizure, he or she is physically unable to control their actions.”

When police confronted the severely disoriented Knox, he didn’t immediately respond to their commands so force was escalated. According to police, Knox assaulted a cop and a customer inside the store. However, his family says he was likely just flailing around as a result of the seizure.

Indeed, this same scenario of epileptics coming to after seizures has played out time and again as cops respond with violence instead of medical attention.

As the video begins, two officers have Knox on the ground. They had tasered him, had knees in his back and were punching and kicking him. According to police, this was a reaction to Knox becoming physically violent. However, this “violence” was likely just a symptom of his seizure.

“When Chris is in his right mind, he is fantastic. He is great, but when he has seizures, he does not know what he is doing his arms go crazy,” said Knox.

The department’s training academy legal instructor Michael Daley told FOX59 that officers are trained to de-escalate situations like this and that the punches, kicks, and tasers were part of this de-escalation.

“It is very dangerous and these things happen so quickly so that is why we teach the officers that there is a point where the talking has to stop and we have to take action,” said Daley.

“We teach them techniques where we are pulling on their arms or twisting their arms and giving some pain to them to gain compliance. We also teach some strikes, such as kneeing a person in their leg and their thigh that is a distraction technique,” said Officer Daley.

However, Knox’s family says all those tactics were excessive force in dealing with Christopher who needed medical help, not knee strikes.

“They are there to serve and protect, not taze and hospitalize and then incarcerate,” said Knox.

Sadly, as NJ.com points out, this is no isolated incident, others have had similar stories across the country. In Reno last year, James O’Doan was arrested after he had a seizure and charged with resisting arrest. Andrea Nicole Hansen says she was arrested in Pismo Beach, California, for resisting arrest and public intoxication after having an epileptic seizure.

Also, as TFTP reported last year, Taharqa Dean, who suffers from debilitating seizures as he copes with his epilepsy, had a seizure. Dean fell unconscious during this seizure and a passerby called 911 for help. While officers were originally helpful during the initial approach, when Dead got up to walk away, the officers’ only tool — violence — was escalated and just like Knox, Dean was beaten to a pulp for having a seizure.

The Dollar’s Reserve Status Is Ending. Will Bitcoin Save Us?