Spread the love Framingham, MA — As TFTP consistently reports, the state, in its relentless and violent pursuit of people… 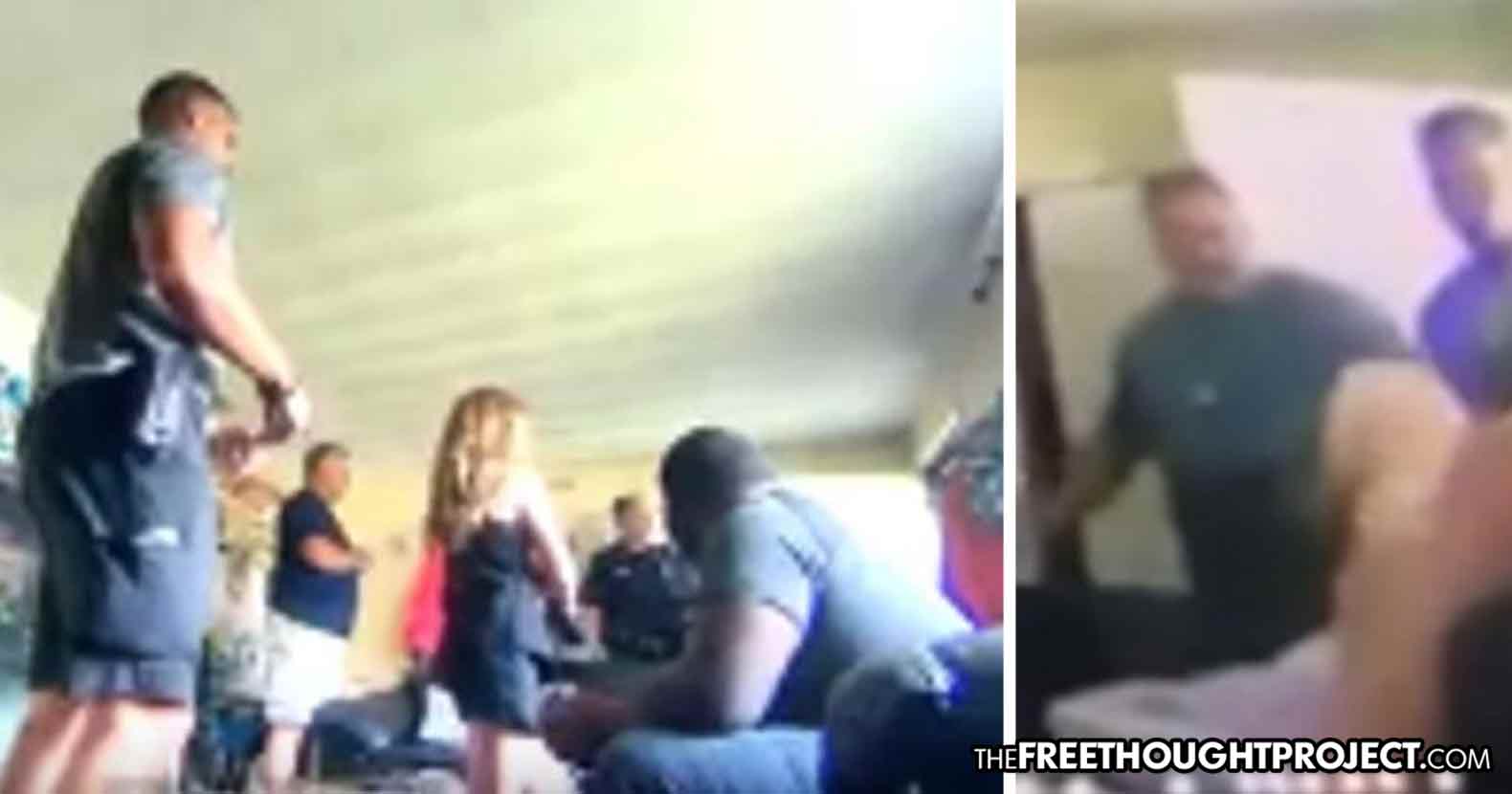 Framingham, MA — As TFTP consistently reports, the state, in its relentless and violent pursuit of people in possession of substances they deem illegal, will lay waste — not only to the rights of those people in possession of said substances — but to those who haven’t even touched them. As the video below shows, police are even willing to violate their oaths to the constitution, entering a home without a warrant, and threaten to kill a family’s dog.

Antoinette Callahan and her family are not some roving gang of rapists and murderers. And, on the day multiple plainclothes cops decided to violate their rights, they were simply inside their home, harming no one. However, that did not stop Framingham cops from barging into their home — illegally and without a warrant — beating their dog and robbing them.

Luckily for the Callahans, they had a camera recording which captured the entire rights-violating debacle on video. What it shows is nothing short of a home invasion by armed thugs ending in a robbery.

As the video shows, without having a warrant, police enter the home and as the family dog barks at one of the cops, he punches it and then threatens to kill it, saying, “If that dog bites me again I’m going to f—— shoot it.”

Police claim a crime has taken place, which is why they say they can enter the home without a warrant—to secure it. However, as the video shows, they did far more than “secure it.”

Securing a home is “for the limited purpose of securing the property only, to make sure no one in the home is tampering with the evidence sought,” Victoria Kelleher, president of the Massachusetts Association of Criminal Defense Lawyers told Patch. “The exception shouldn’t swallow the rule — the police can’t use the opportunity to conduct a warrantless search and thereby violate the Fourth Amendment.”

However, that is exactly what happened. In the video, we can clearly see the cops looking around, even pulling cushions from the couch to look under them. This is a complete violation of the 4th Amendment.

This week, the city of Framingham issued a statement on behalf of the police department concerning the raid:

“On August 7, 2019 members of Natick and Framingham Police assigned to the Metrowest Drug Task Force applied for a search warrant in connection with an ongoing investigation into a Prior Drive residence in Framingham. Probable cause was found to issue the search warrant and officers subsequently executed it at the home. Pursuant to the investigation police have applied for criminal charges and a hearing is scheduled. As this is an ongoing and active investigation no additional information can be released at this time. “

After a several minutes long rights violation, police obtained a warrant and searched the home. Despite claiming charges are coming for allegedly finding marijuana in the home, no arrests have been made. However, according to the family, they were robbed down to the money in their pockets.

“These police officers raided our home with no warrant in front of our children! They forced entry into our home and threatened to kill our pregnant dog! They committed an illegal search and seizure, took all of our savings and our legally owned guns, literally took the cash out of our pockets! Now we are need (sic) to hire a lawyer to fight for our constitutional rights! We are good hard working patriotic Americans and they have robbed us down to our last pennies,” Callahan wrote in a GoFundMe description.

If you’d like to support this family, you can do so at the GoFundMe page, here.

Below is the disturbing video.

Illinois Police Just Claimed if Marijuana is Legalized, They’ll Have to Kill Their Police Dogs

Liberty & The Ultimate Power of The Word “No”