Spread the love Methuen, MA — “If you don’t want to get shot by police, don’t break the law,” is… 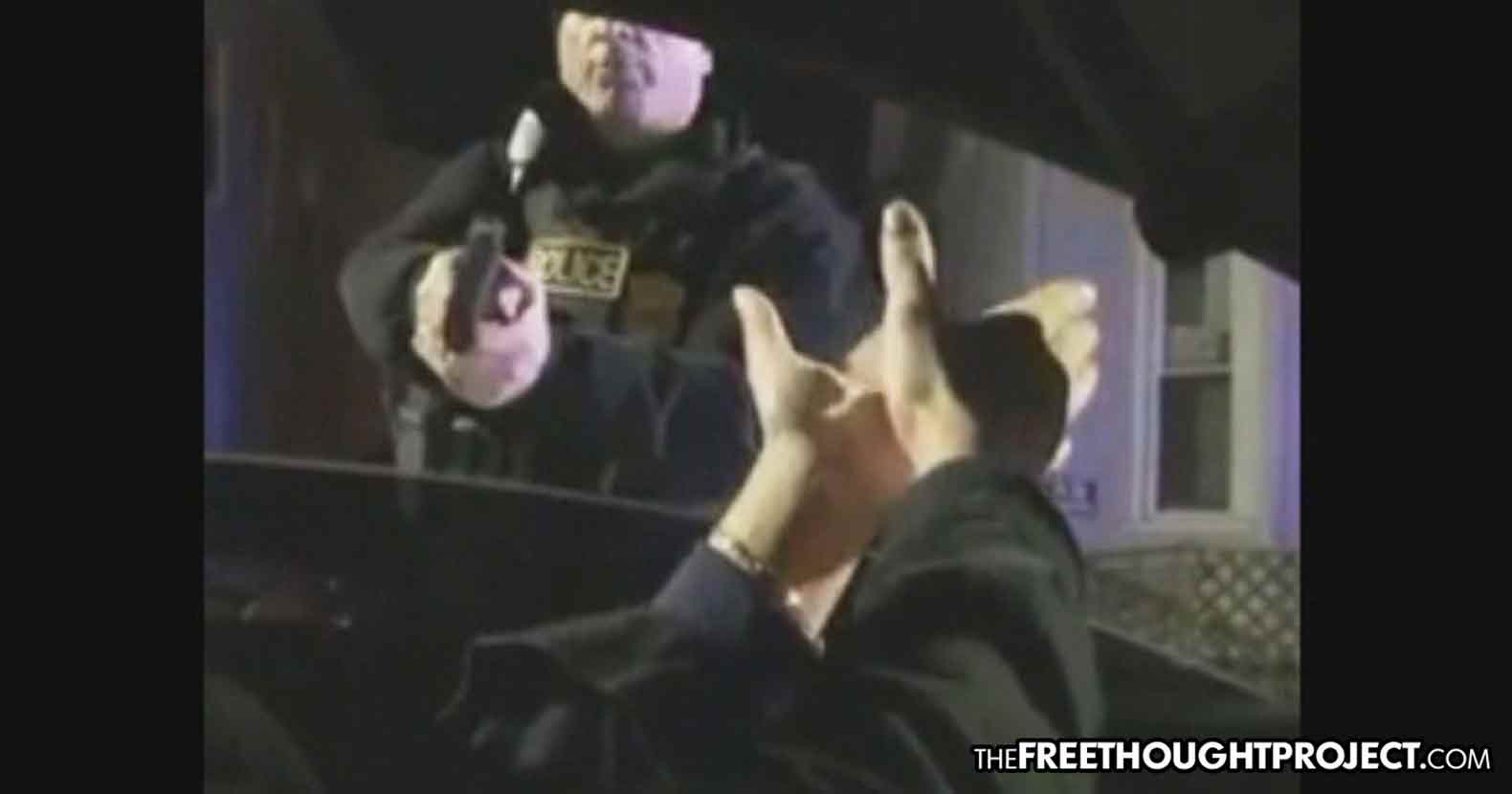 Methuen, MA — “If you don’t want to get shot by police, don’t break the law,” is a phrase oft repeated by the police apologist crowd who refuse to actually examine the details of many police shootings. Unfortunately, however, this phrase is proven wrong on a regular basis and the proof comes in the form of injured innocent people and dead bodies. As the following video shows, David Nin, 20, learned that being innocent and not breaking a law is no defense against police escalating to potential deadly force.

Nin’s terrifying, and nearly life-ending experience unfolded in March, however, video of the incident has only just been released. It shows a dangerously scared officer pointing a gun at Nin’s head for breaking absolutely no law.

As the video shows, Nin is pleading with the officer not to shoot him, holding his hands out and telling him to put the handcuffs on him. As the myriad of blood-soaked videos posted on this website show, one wrong move and Nin would’ve been killed.

Luckily for Nin, his girlfriend was filming and caught the entirely frightening situation unfold. According to Nin, he was on his way home from work that night in March when he saw an unmarked police vehicle driving slowly.

Since the cruiser was obstructing the flow of traffic, Nin legally put his blinker on and tried to pass him. That’s when the fearful cop apparently had his ego damaged and jumped out of the car with his gun drawn.

“When I tried to pull over to the side he just came out with his gun, telling me not to move. He told me not to move at all,” Nin said, “I took my hands right out the window I was like, yo chill, don’t shoot.”

When the cop noticed that Nin’s girlfriend was filming, he demanded she stop filming. Knowing that she was about to film a potential murder, she did not stop.

“And he was telling her to put it down so, like, I got scared. I like thought he was going to light off,” Nin said.

Nin obeyed everything the officer said and despite this, he was assaulted with a deadly weapon, pointed right at his face.

When asked to exit the vehicle, he did so and was put into handcuffs without incident. When other officers arrived, who apparently had much cooler heads, the situation was de-escalated and Nin was sent on his way — after being kidnapped, assaulted with a deadly weapon, and nearly made into a statistic.

Naturally, police claim they were in the area because of a shooting that occurred earlier that day, which had officers on edge.

Police say the driver, “did not stop initially upon the activation of the officer’s blue lights, and the vehicle suddenly went into reverse and began to change directions.”

Nin says his moving the car was because of the unorthodox way the officer stopped him. The cop did not pull him over. Instead, he blocked the entire road, causing confusion.

Nin told CBS Boston that a calmer approach from the officer could have changed the outcome of the encounter.

“Actually pull me to the side. Not just block the street. Actually come up and try to talk to me,” he said.

“Officers on-scene ultimately deescalated the situation, and the driver was released without charges,” a statement from the police continued.

Luckily for Nin, he escaped with his life. Other entirely innocent people, like Philando Castile, can unfortunately not say the same thing.