Spread the love Williamston, SC — Filming the police is entirely legal in every state. However, all too often, we… 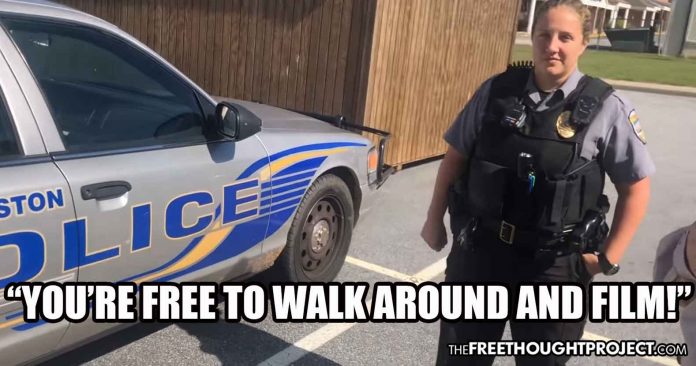 Williamston, SC — Filming the police is entirely legal in every state. However, all too often, we will see police officers overstep their authority and arrest, attack, and assault innocent people for the constitutionally protected act of documenting their behavior in public. While the norm seems to be cops violating the rights of people for conducting what are now referred to as First Amendment Audits, when cops support a citizens right to film in public, they deserve to be recognized.

News Now South Carolina has filmed dozens of these first amendment audits. Most of them end with police threatening him for filming or removing him from the property. However, in Williamston, SC, the cops at the Williamston police department did the opposite.

When NNSC showed up to the department to film their patrol cars in the parking lot, these officers remembered their oaths to the constitution. Instead of threatening the man, they talked to him like a human being.

These officers were nice and cordial and even asked the man if he would like them to get some photos of him by the police cars. But that was just the beginning. When the officers found out NNCS was not from the town, they began recommending good restaurants in the area and welcomed him — instead of getting belligerent and defensive.

The officers in the video below show exactly how to deal with folks practicing their freedom of speech and they deserve to be commended, especially since there are so many other departments who forget their oaths to the constitution.

TFTP reports on many instances in which citizens film the police just because they can. Often times we hear from our readers that the first amendment auditors are trying to get a reaction from the police or they are provoking them. But one cannot provoke someone by practicing their free speech.

The first amendment auditors whose videos we cover are not the ones initiating contact. The police officers are the ones confronting them — which is totally fine. However, when police choose to attack that person’s right to free speech, instead of upholding it, that is when conversation moves to violation.

If all the cops in these first amendment audits acted the the Williamston police department, there would be no need for the audits in the first place. Bravo, Williamston police, well done and we thank you for honoring your oaths to the constitution.

As TFTP has reported, it has been clearly established that all Americans have the right to record the police. For an officer of the law to remain willingly ignorant of this precedent is at best, dereliction of duty, and at worst, unlawful deprivation of rights.

As the ACLU points out,

Taking photographs and video of things that are plainly visible in public spaces is a constitutional right—and that includes transportation facilities, the outside of federal buildings, and police and other government officials carrying out their duties.

The right of citizens to record the police is a critical check and balance. It creates an independent record of what took place in a particular incident, one that is free from accusations of bias, lying, or faulty memory. It is no accident that some of the most high-profile cases of police misconduct have involved video and audio records.

When police refuse to have their public service documented and this refusal morphs into assault with a deadly weapon, or police brutality something has gone seriously wrong. No one should ever face persecution for their freedom of expression—especially in the land of the free. And the Williamston PD has apparently gotten that memo.