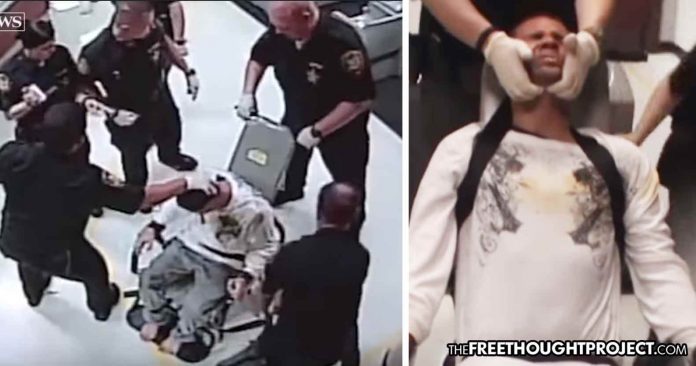 Cincinnati, OH — A federal judge this week refused to dismiss excessive-force claims against Montgomery County, Ohio, and a jail officer who was seen on video torturing a man pepper spray who was suspected drunk driving and strapped in a restraint chair.

When pepper spray was invented, it was, in the words of one of its creators, to be “used to avoid confrontation or injury.” But in the hands of so-called law enforcement, it is increasingly being used as a device of torture, especially when the subject getting pepper sprayed is already in four-point restraints to a chair.

Increasingly, it seems, law enforcement feels it is within their rights to pepper spray individuals who are already restrained. But one victim of apparent police brutality isn’t taking the abuse sitting down. Charles Wade, a resident of Montgomery County, in Dayton Ohio, was arrested in October 2016, on drunk driving charges.

From the video taken in the Montgomery County jail cell, it was clear Mr. Wade was disturbed. He was beating his head against a cinder block wall, then a padded wall, until officers, for his own safety, decided to place him in a restraint chair.

Wade was compliant, offering up no resistance to officers. But did warn them he’d consult with a lawyer if they attempted to cause him pain. Even after being placed in the chair, and having his hands cuffed behind his back, he made what some would have considered a legitimate claim. He said being restrained in the chair, while having his hands cuffed behind his back, amounted to “cruel and unusual punishment” the definition of torture.

Officers then attempted to remove the cuffs, freeing his hands, and allowing his arms to be strapped to the chair. It’s hard to imagine any real consensus would think it improper to restrain such a man, who had already demonstrated a propensity for self-harm. But what happens next, in the eyes of many, amounted to torture.

Officers know all they have to do to get a suspect to react physically, is to use the handcuffs to put pressure on hand bones, and the wrists. When that happens, an inmate will likely move, giving the appearance of someone who is resisting arrest. That may have happened in Wade’s case, because as he was being released from his cuffs, officers strengthened their hold on Wade, even placing his head between his knees. Then, while holding him there, officers discharged pepper spray into his face. Immediately, Wade began asking for help and saying, “I can’t breathe.”

According to court documents, as Wade was being wheeled away, another inmate began banging on his cell door in protest about the treatment that he just witnessed. In response, the defendant, officer Eversole can be heard on the video yelling a threat back to the inmate: “You’re next…..you keep it up…..you are next!”

Maybe Americans are becoming desensitized to the act. Maybe it’s because we see unruly inmates on reality TV shows being belligerent and crude. But when inmates are tased and pepper sprayed while being in chair restraints, it’s conceivable to conclude the majority would consider it flat out torture.

Wade’s attorney agrees. Douglas Brannon, his attorney, is also the attorney for Amber Swink, who was also pepper sprayed in 2015 in the same Montgomery County jail while being fully restrained to a chair.

In that video, Sgt. Judith Sealy can be seen approaching Swink in her cell, and then deploying the orange colored pepper spray. Swink struggles for air, gasping, and writhing until it appears as though she passes out. Swink claims the event has traumatized her, creating in her a fear of the police which she did not have prior to the incident.

According to the Washington Post, which also covered the two stories of alleged torture by Montgomery County Ohio Jail personnel, pepper spray was never intended to be used as an offensive weapon on restrained individuals. “‘You cannot find any training manual that will tell you it is allowable to pepper-spray somebody who is restrained,’ said Kamran Loghman, a U.S. Naval Academy professor,” who reportedly helped invent pepper spray.

However, a simple YouTube search of “pepper spray” and “restraint chair” keywords produces a disturbing number of videos of suspects, inmates, and prisoners being pepper sprayed while at the same time posing no risk to jail personnel, because they’re already completely subdued.

We spoke with a retired jailer from Massachusetts who said she knew she had to get out of the industrial prison complex industry after she witnessed one prison guard and three police officers tase a man’s genitals while being fully restrained to a restraint chair. She said she knew those officers had “lost their humanity” and were treating inmates in a degrading and torturous manner.

Brannon told reporters, “I think it happened again because there was no discipline handed out to officers involved in abusing Amber Swink.” He said, “I think this type of treatment is becoming something that happens with impunity within the Montgomery County jail. Certainly, there were four large corrections officers — in addition to a sergeant — who were with Charles Wade and who had sufficient control over him and the situation without resorting to excess uses of force, including the pepper spray.”

As TFTP has reported on numerous occasions, while it is common for police to conduct their own internal investigations into allegations of abuse, more often than not, the individuals implicated in the abuse are never charged with a crime. If charges are filed, they most often get dropped. Very few officers ever spend one day in jail, getting vacation time docked instead of facing criminal charges and real jail time. Swink and Wade, with the help of their attorney Mr. Brannon, have both filed lawsuits against the jail and its employees, alleging they were the victims of torture. And now, the taxpayers, not the cops, will be held accountable.