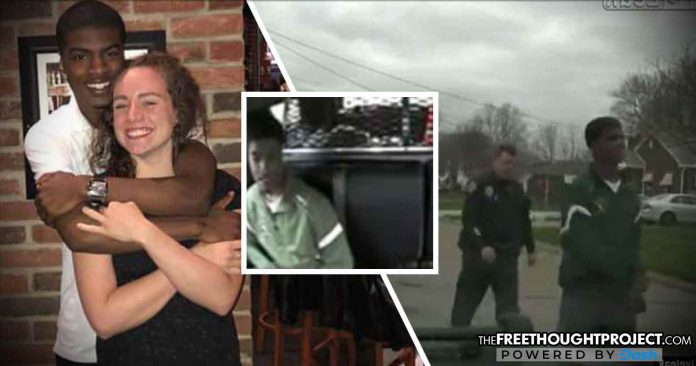 Lorain, OH — An abusive power tripping cop was recently fired after dashcam footage surfaced showing him pull over his own daughter and her boyfriend and threaten to make “some shit up” to arrest him. Not only was he caught threatening to arrest an innocent teen and illegally detaining two innocent people but this abusive cop was also caught ignoring an actual call for help during the stop.

On April 16, Lorain police officer John Kovach Jr. pulled over his daughter’s boyfriend, Makai Coleman without cause. During the stop Kovach tells Coleman that he is going to jail despite having no reason.

According Safety-Service Director Dan Given, Police Chief Cel Rivera and other command officers, Kovach violated a slew of department policies during the stop, including unlawfully using police resources to track down his daughter’s ip address on her phone and geo-locate it.

“These actions are not acceptable for members of our Police Department and we felt it warranted immediate dismissal,” Given said.

As the Chronicle-Telegram reports, according to an internal investigation completed by Lt. Ed Super as well as dashcam footage from Kovach’s cruiser, shortly before 6 p.m. on April 16 a silver vehicle with a driver and three passengers passed Kovach’s patrol car in the same direction that he was facing on West 34th Street. Without alerting dispatch, Kovach initiates a stop.

Kovach then orders Colemen from the car as his own daughter sits in the back seat. He tells Coleman that he is “going to jail,” and demands the teen “have a seat in my car.” When Coleman questions why he’s being arrested, Kovach responds by saying, “We’ll make shit up as we go.”

According to the report:

Kovach then addresses Gloria Morales, who comes out of her home nearby because her children are two of the three people in the car with Coleman. He tells Morales his daughter’s computer is inside her house and while she initially gives him permission to search the house, she later tells him to come back with a search warrant when he threatens to give her daughter a $ 300 ticket for not wearing her seatbelt.

Morales and Kovach argue back and forth after Kovach tells her to go inside the house. When she says she is calling 911, he threatens to arrest her, telling her it is not an emergency, according to documents related to the firing. He tells her two children to get out of the car and go with Morales. At that point, he notices his daughter, Katlyn Kovach, 18, in the backseat.

During the stop, Kovach failed to address an actual call for help about a road rage incident down the street. He simply ignores the call while threatening to arrest an innocent mother, search her home without a warrant, and kidnap and extort multiple innocent teens—including his own child.

Kovach attempted to justify the unlawful behavior by claiming he was worried for his daughter’s safety and cited an apparently non-existent Facebook post as his reason.

Coleman said that he had been stalked by Kovach, receiving a call weeks prior to the stop telling him that he would make up a warrant to have him arrested. According to Coleman, the officer also said he would go to the Army recruiter and tell them not to allow Coleman to leave for boot camp and ruin his chances of getting in the Army.

During an internal investigation, the claims of Kovach’s misconduct were all substantiated and the officer was recommended for discipline. He was then fired on May 11.

Rivera said the actions his officer were “an abuse of police authority and a serious departure from appropriate protocol…they are contrary to the mission, values and policies of the Lorain Police Department.”

Naturally, the police union is appealing the decision to fire Kovach in May. According to the police union, what Kovach did was fine and dandy and he is the victim in this incident—not the innocent teens and the mother.

“Officer Kovach is looking forward to presenting his side of the story to a neutral arbitrator this coming September, when the arbitration is scheduled,” FOP President Kyle Gelenius said, noting that what Kovach did was not misconduct and that the city violated his rights by firing him.

If you’d like to peacefully let the police union know how you feel about their decision to condone such tyrannical actions as seen in the video below, you can do so on their Facebook page, here, or by calling them at (440) 204-2177.

Disturbingly enough, this is the second such case in only a week that TFTP has reported on about a police officer abusing his power to threaten and harass innocent boyfriends. In another case, a sheriff’s deputy in Florida was caught on video walking into an innocent man’s place of work and threatening to murder him and his mother because he did not like the man dating his daughter.

However, not only was he not arrested for making these threats to kill two innocent people but unlike Kovach—he wasn’t even fired.

No Good Options For The Fed; So Audit It & Get Rid of It!

Free Speech Freak Out: Censors Panic As Musk About To Purchase Twitter