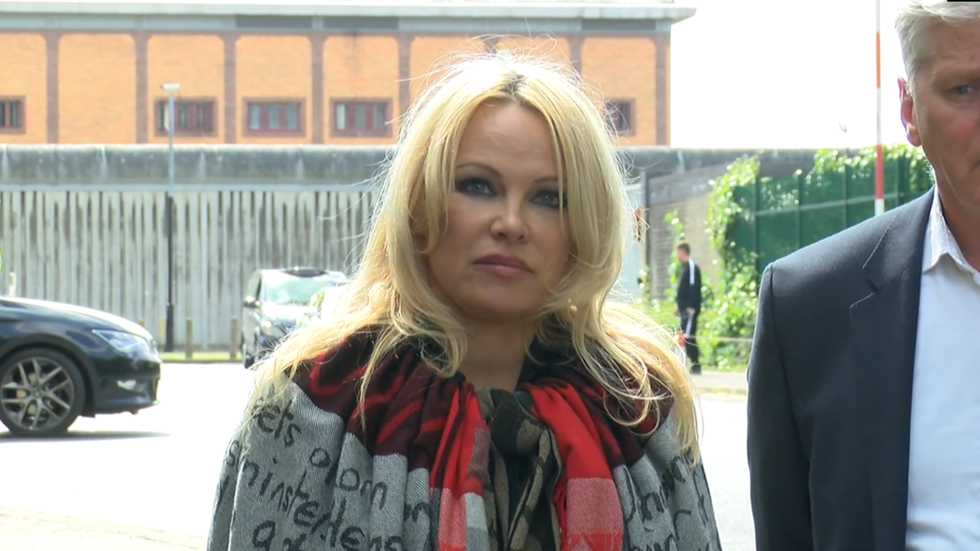 An emotional Pamela Anderson and WikiLeaks editor-in-chief Kristinn Hrafnsson opened up to reporters following the first ‘social’ visit to Julian Assange since the whistleblower was imprisoned last month.

Anderson and Hrafnsson were the first people allowed to visit Assange, aside from his lawyer, since the 47-year-old was sentenced to 50 weeks imprisonment for violating bail conditions.

The pair looked solemn following the visit on Tuesday, and spoke to reporters outside of the prison about the “shocking” conditions the WikiLeaks founder is being held in. Friend and public advocate Anderson spoke of her love for the Australian and said he has not been able to speak to his children or access a computer or library since his incarceration.

“Justice will depend on public support,” said a “sick” Anderson as she faced the media.  “He’s a good man. I love him I can’t imagine what he’s been going through,” she added.

“I have to say from my heart that this visit did not reflect well on society here,” Hrafnsson added. “This is not justice this is an abomination.”

Both condemned the decision to house Assange in a high security prison, in which he spends 23 hours per day in his cell, with 30 minutes allotted to go outside – weather permitting – and 30 minutes to “do anything else.”

“I can say Julian Assange is bent but not broken,” said Hrafnsson. “He is an extremely resilient person. Such reliance comes from the fact that he knows he is innocent. He knows he has done nothing wrong, he knows he is being persecuted for the simple fact of doing journalistic work.”

“We need to save his life. That’s how serious it is,” Anderson said, with Hrafnsonn adding that “it is a question of life and death.”

Assange was arrested on April 11 and sentenced to 50 weeks imprisonment for violating bail conditions on May 1. He now faces the possibility of extradition to the US, where he is wanted for “conspiracy to commit computer intrusion.” An extradition hearing has been adjourned until May 30.

Nothing ‘crazy’ about bombing Iraq to ‘smithereens’? Blair taken to task on social media over ‘state of British politics’ remarks