Another ghost regularly seen haunting the White House Feathers were ruffled, and presidential security officers were on full alert this… 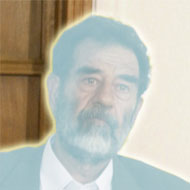 Feathers were ruffled, and presidential security officers were on full alert this morning, after an apparition much resembling the forlorn figure of murdered Saudi Arabian dissident journalist, Jamal Khashoggi, was seen lumbering along corridors at the White House last night.

Mr Khashoggi, liquidated on 2 October, and liquidized shortly thereafter, has quickly faded from the consciousness of most Americans in record time, and may want to remind those in a position to avenge him that it is still not too late to take action against those responsible for his slaying.

The ghoul, now grossly-disfigured, still clad in a filthy and bloodstained, ex-white robe, carrying its head underneath its right arm – which, in turn, was tucked under its left arm – was seen by several of the White House staff walking around the corridors and in various offices, seemingly trying to gain an audience with Mr Trump.

Mr Khashoggi's ghost, however, may have met its match in Mr Trump.

The president had been busy trying to start a war with France, and had told his secretaries:

"I'm not seeing any ghosts today. They're rude and terrible people. Tell him to send me a tweet."