Sen. Bernie Sanders and Rep. Grace Napolitano greet students while attending a rally at the Capitol in Washington, D.C., on… 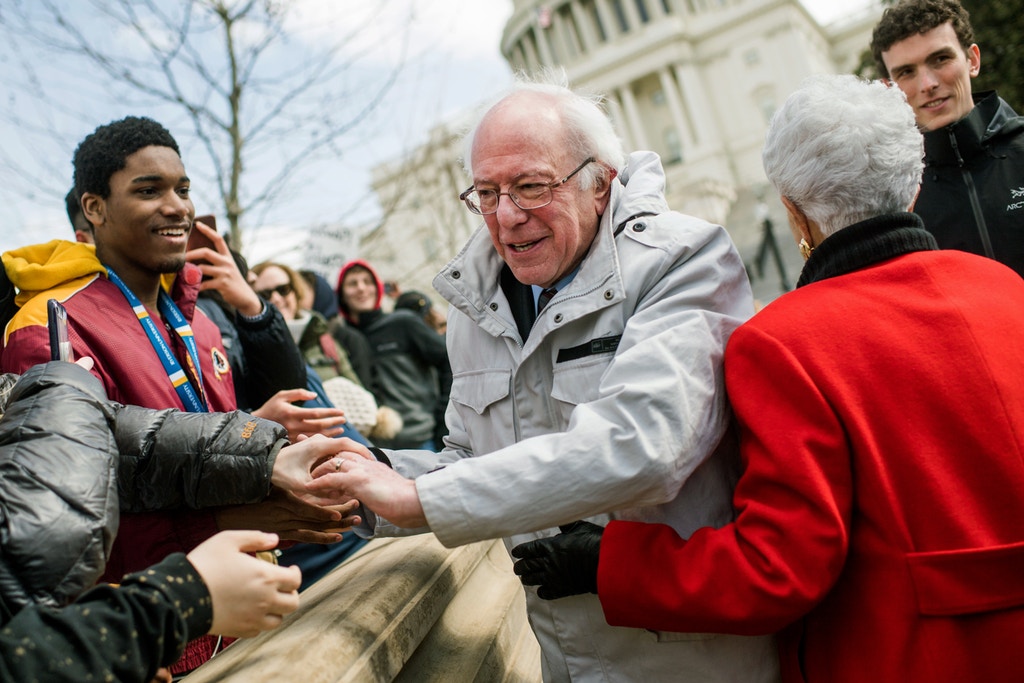 Sen. Bernie Sanders and Rep. Grace Napolitano greet students while attending a rally at the Capitol in Washington, D.C., on March 14, 2018.

“We began the political revolution in the 2016 campaign, and now it’s time to move that revolution forward,” Bernie Sanders said on Tuesday morning, as he announced his candidacy for president of the United States. Within 24 hours, he had raised a whopping $ 6 million from more than 200,000 donors. And according to the latest polls, he is the most popular of the declared candidates.

Sanders has gone from 2016 insurgent to seeming 2020 frontrunner.

Nevertheless, his age is still an issue. It would be mad to pretend otherwise. “Since 1828,” reported Axios on Wednesday, “only 3 Democratic presidents have been in their 60s when inaugurated — and none came close to Sanders, who would be 79 if elected in 2020.”

If he were to win the next election, the independent senator from Vermont, who is five years older than Donald Trump, would be the oldest president in the history of the United States — six years older than Ronald Reagan was when he won re-election in 1984. In terms of the Democratic primaries, if 77-year-old former Vice President Joe Biden chooses not to run, Sanders will be the only candidate above the age of 70 come the first round of Democratic presidential debates this summer.

So how does he neutralize this issue?

There is a possible — if unconventional — solution: Sanders should promise to serve only one term in the White House. Four years max! 2020 and done!

A one-term pledge isn’t as crazy as it might sound. As the Washington Post’s Philip Bump noted in 2015:

Three American presidents made — and kept — pledges to serve one term at most. Rutherford B. Hayes and James K. Polk made one-term pledges; each served one term. William Henry Harrison, our second-oldest president at 68, also took a pledge to serve only one term, a pledge that was in keeping with his Whig Party. That pledge turned out not to matter; he barely served a full month before dying.

In recent years, high-profile — and older — figures in both parties have seriously entertained the idea. Seventy-year-old John McCain was “inches away” from making a one-term pledge when he announced his candidacy for the Republican presidential nomination in 2007. Then-73-year-old Biden considered it in 2015, and may do so again this time around.

Think about it: There are several clear advantages to any older candidate, but especially Sanders, renouncing any ambition to serve a second term in the Oval Office. For a start, while Sanders and his surrogates might be able to defend the idea of a president who is in his late 70s, they might struggle to convince voters that he’d be as effective in his late 80s (he’d be, ahem, 87 at the end of his second term).

There are benefits beyond just Sanders’s age. Making such a pledge would be a dramatic and bold move that could shake up the Democratic primaries. Whether we like it or not, horse race-obsessed reporters and pundits love dramatic and bold moves. The more unconventional, the better. Sanders would immediately stand out from a crowded Democratic field, many of whom have adopted his ideas on everything from health care to higher education. It would make the Vermont senator look like he is interested only in the issues — in contrast to the naked ambitions of some of his younger rivals.

In fact, one of Sanders’s biggest selling points has always been that he is an independent and an outsider. A one-term pledge would only reinforce that iconoclastic image and boost his anti-establishment appeal with the millions of Americans who loathe the Washington political class.

His rationale for such a pledge could be both simple and popular: As president, he would be free of re-election pressures and distractions, allowing him to devote a full four years to two or three major issues: Medicare For All, a Green New Deal, and, maybe, free college for all, too.

A one-term pledge would only reinforce that iconoclastic image and boost his anti-establishment appeal.

There is a danger, of course, that a one-term president would be seen as a lame-duck. Maybe. On the other hand, Sanders would come to office with a very specific and time-sensitive mandate to get things done. His pledge might make it harder for Republicans in the Senate to block his agenda, given he’ll have been elected to serve only four years and won’t face the re-election pressures that they will. And, in terms of his legacy, he would also be dodging the second-term curse that has plagued so many previous presidents.

Finally, in declaring that he would only serve four years in office, Sanders could bestow much more significance on whomever he picks as his running mate. There is an opportunity here for the senator to address the “identity politics” objection to his candidacy, or what some might call his “old white guy” problem.

This is the most diverse field of Democratic presidential candidates in American history. Plenty of people in the party’s base, even those who are ardent fans of the Vermont senator and his politics, don’t want an all-white or all-male presidential ticket (and for good reason!).

So why not put Stacey Abrams, the Democratic nominee for Georgia governor in 2018, on the ticket — and all but guarantee her the Democratic presidential nomination come 2024? She is black (check), a woman (check), progressive (check), and unites the various wings of the Democratic Party like no other politician in the United States.

How about Sen. Kamala Harris? Could Sanders-Harris 2020 be the unity ticket that the Democrats are looking for? The Jewish, male democratic socialist and the mixed-race, female former prosecutor? I have my own objections to her controversial record as a “law and order” district attorney and attorney general in California, but the fact of the matter is that Harris has the most progressive voting record of any Democrat in the Senate.

Why wouldn’t an ambitious politician want to run on the bottom half of a presidential ticket whose top half has pre-announced that they’ll be gone in four years? (This is assuming, of course, that Sanders wins the Democratic primary.)

To be clear, then: By making a one-term pledge, Sanders could help shut down the debate over his age; grab media attention from his rivals; elevate a progressive, nonwhite woman in the process; make it easier for himself to win a mandate; and improve his own effectiveness as a leader once he’s seated behind the Resolute Desk.