Israel’s balancing act is floundering. It is no longer able to reap America’s unconditional and, often, blind support, while simultaneously…

Israel’s balancing act is floundering. It is no longer able to reap America’s unconditional and, often, blind support, while simultaneously benefiting from China’s growing economic influence and political prestige.

Thanks to the heated cold war between the U.S. and Chinese economic superpowers, the Israeli strategy of playing both sides is unlikely to pay dividends in the long run. Soon enough, Tel Aviv might find itself having to make a stark choice between Washington and Beijing.

Pompeo communicated his country’s stand on both issues, reflecting Washington’s long-standing policies regarding Palestine and China. In the case of Palestine, as with the rest of the Middle East, Washington seems to adhere to Tel Aviv’s agenda, often to the letter. China, however, is a different story.

Two significant historical examples come to mind: one is Israel’s attempt to sell China Israeli-made Phalcon Airborne Radar System, which relied heavily on American technology in the 1990s; a similar event transpired in 2005, this time concerning Israel’s Harpy anti-radar missile. On both occasions, Israel succumbed to American pressure and canceled both deals.

For the Chinese, Israel matters for two different reasons. One, Israel is a strategic stop in China’s Belt and Road initiative, China’s most significant economic project to date, ultimately aimed at turning Beijing into a center of global trade and financial activity. Two, China is hoping to fight the U.S. on its own political turf, in the Middle East – partly in response to the American ‘pivot to Asia’ strategy initiated by the Barack Obama administration.

But the world – in terms of political and economic balances of power – after the coronavirus pandemic is likely to prove a different one when compared with previous years. China’s rise has been in the making for many years and the U.S. political retreat and declining global outreach has been quite evident for some time. The isolationist policies of the Donald Trump Administration, coupled with Washington’s many China-related tantrums in recent years, are all indicators of the vastly changing political realities of a once-unipolar world.

A few years ago, Beijing had the time, patience, and resources to play a long-drawn geopolitical game in order for it to challenge the U.S.’s global influence, whether in South America, Africa, or Israel.

The visit by China’s Vice President, Wang Qishan, to Israel in 2018, to “boost business ties,” was part of this Chinese strategy. That visit followed the signing, one year earlier, of the China-Israel Innovative Comprehensive Partnership. As of 2018, China-Israel trade has jumped to $ 14 billion and has grown exponentially ever since.

China would have been happy to carry on with that strategy for many years to come. Israel, too, would have played along, considering the lucrative financial returns from its China partnership.

Indeed, despite Washington’s warnings against and, at times, explicit demands that Israel refrains from giving Chinese companies access to fifth-generation infrastructure (5G) projects in the country, Israel labored to make China feel welcomed.

However, the global response to the coronavirus pandemic is likely to change this, as it has already accelerated the cold war between the U.S. and China, pushing the latter to adopt a more aggressive form of diplomacy and pour massive sums into other countries’ economies to help them in their desperate fight against COVID-19.

The Chinese strategy is predicated on two main pillars: fortifying existing ties and solidarity with China’s allies or potential allies anywhere in the world, while pushing back against China’s foes, especially those who are participating in Washington’s anti-Beijing campaign.

The latter phenomenon is known as ‘wolf warrior diplomacy’. The ‘wolf warriors’ are Chinese diplomats who have, for months, pushed back with unprecedented ferocity against what they perceive to be U.S. and Western propaganda.

“We never pick a fight or bully others,” China’s Foreign Minister, Wang Yi, told reporters in Beijing on May 24, while explaining China’s novel approach to diplomacy. “We will push back against any deliberate insult, resolutely defend our national honor and dignity, and we will refute all groundless slander with facts,” the top Chinese official said firmly.

China’s new aggressive diplomacy, especially if it continues to define the country’s approach to foreign policy in the coming years, is unlikely to permit Israel to maintain its balancing act for much longer.

China’s ambassador to Israel, Du Wei, who was entrusted with implementing Beijing’s soft-diplomacy with Tel Aviv, died in his home only a few days following Pompeo’s visit to the country. Although Wei’s death was not – at least publicly – perceived to be the result of foul play, his absence, especially in the age of coronavirus and ‘wolf warriors’, might signal a shift in China’s approach to its economic and political interests in Israel. 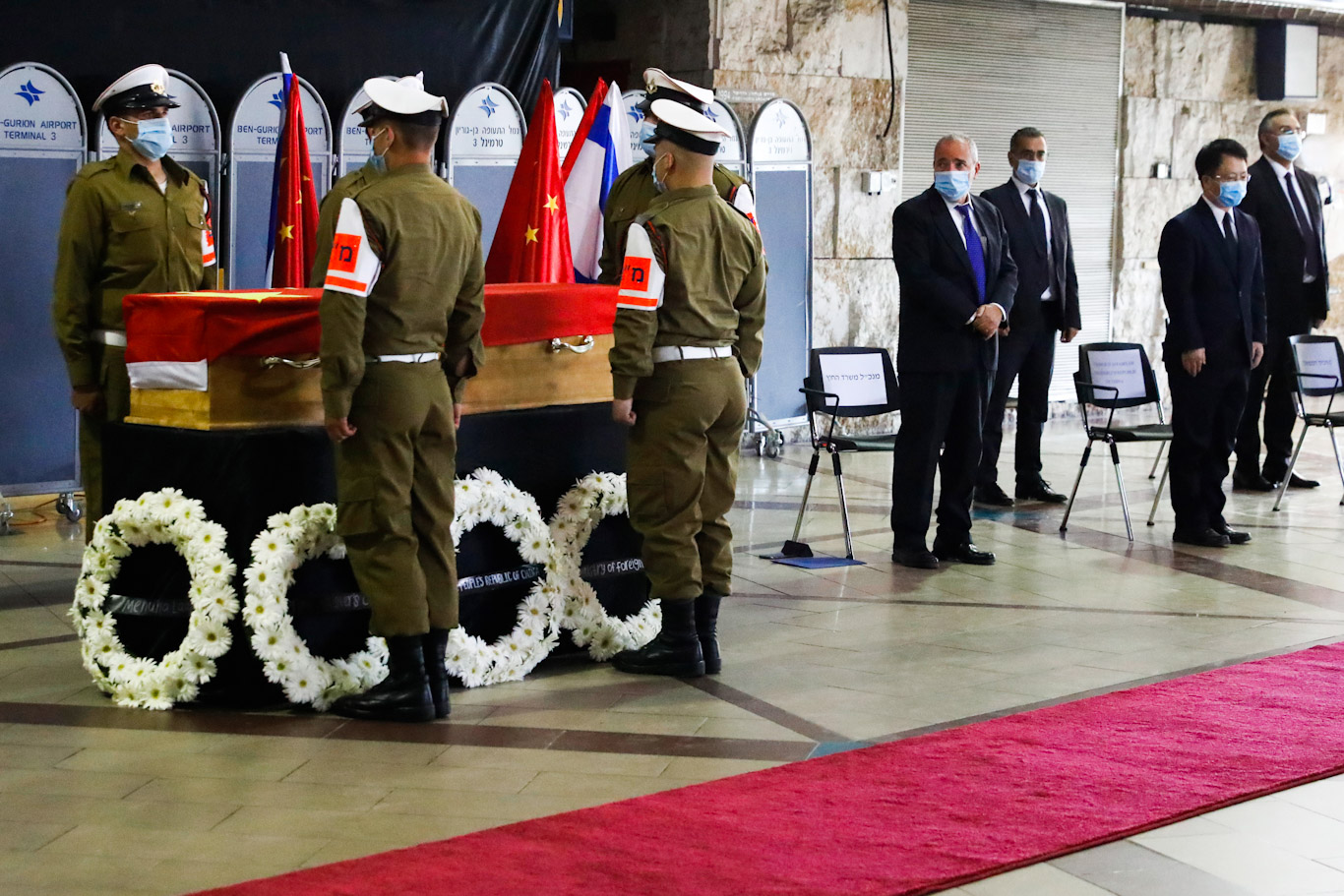 Israelis soldiers stand near the coffin of Chinese Ambassador Du Wei at the Ben-Gurion International Airport, near Tel Aviv, May 20, 2020. Jack Guez | AP

On May 26, under American pressure, the Israeli Finance Ministry denied China a massive $ 1.5 billion desalination plant contract, awarding it to an Israeli company, instead.

This is the first time in many years that the U.S. has used its political and economic sway over Israel to curb Chinese influence in the country. China must be anxiously watching events unfold, to see if U.S. pressure on Israel will continue to undermine Beijing’s long-term strategy.

The world’s quickly shifting balance of power and the U.S.-Chinese unmistakable fight for dominance is likely to, eventually, force countries like Israel to make a choice, of wholly joining the American or the Chinese sphere of influence. It is all reminiscent of the American-Soviet Cold War, where much of the globe was divided into zones of influence operated by proxy from Washington or Moscow.

Balancing acts in politics only work if all parties are willing to play or, at least, tolerate the game. While this form of politics suited Israel’s interests in the past and was played, quite successfully for years by Israeli Prime Minister, Benjamin Netanyahu, the country’s balancing act is, possibly, over.

Between Washington’s precise demands to Israel to keep Beijing at bay, and the latter’s aggressive ‘wolf warrior’ diplomacy, Israel is facing a stark choice: remaining loyal to a fading superpower or diving into the uncharted waters of an emerging one.