Spread the love Hawthorne, CA — Fitting the description, in the land of the free, is an all too common… 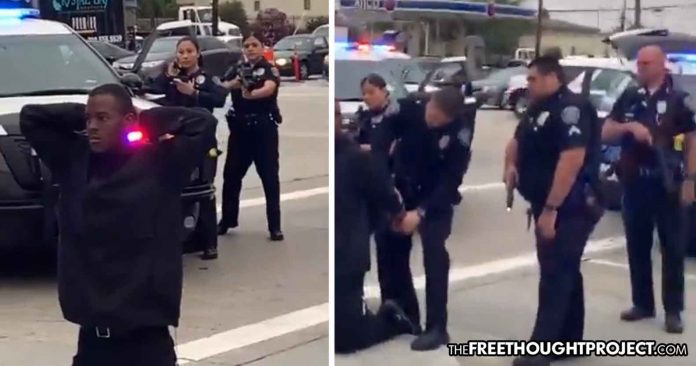 Hawthorne, CA — Fitting the description, in the land of the free, is an all too common phrase used by public servants to justify the horrific abuse of innocent people. All too often, the abuse turns deadly, and these innocent people are killed or permanently injured. As the video below illustrates, filming these interactions and telling police they are on video can be the difference between life and death.

In Hawthorne, California on Friday, a woman who was filling her car up with gas decided to pull out her phone and film when she saw several officers holding an unarmed man at gunpoint.

The man, who says his name is William, was on his knees with his hands on his head as more officers continue to show up.

The woman filming, who says her name is Skye, pleads with the officers not to kill the man. She says her boyfriend had been killed by police in 2015, so she was all too familiar with these situations.

Instead of simply moving in to handcuff the unarmed man — who police accused of fitting the description — more officers arrived and pulled out their guns. At one point, multiple officers held AR-15 rifles pointed at his head and at the woman filming too.

After police finally get over their fear of the unarmed man, they move in to put him in handcuffs. It was at this time that the sobbing woman is approached by an officer who appears to be a supervisor and who asks her what’s wrong.

The officer admits that they don’t even know if this guy is the suspect and he tells the woman that the man is simply “being detained.”

“We got a call about a robbery …he seemed to match the description ..we’re just detaining him. We’re not saying he’s a suspect …try to relax. It says a weapon was involved that’s the only reason he gets held at gunpoint,” the officer tells her. She’s sobbing. “It’s just for our safety and everybody around’s safety, OK?”

He asks who the man is to her: “I don’t even know him but I care that much,” she says through tears.

As she continues filming the interaction, one officer pulls up and appears to block her from filming, using his cruiser as a shield. However, Skye moves around and continues to film.

As the man is being searched, he can be heard telling them that he had just left a store and purchased items.

Weather or not the man was arrested is unclear. There have been no statements from the Hawthorne police department and they have not returned our request for comment.

One thing is certain, however, and that the fact that this woman’s decision to film the officers that day most assuredly had a positive effect on the outcome of the situation.

As TFTP has reported, fitting the description can be a dangerous scenario.

Like the video above, harrowing footage was released in October by the Glassboro police department showing multiple officers treat innocent students like dangerous criminals. During the confusion the students’ lives were threatened as cops held them at gunpoint with AR-15s.

According to police, the two innocent students, Altif Hassan and Giovanna Roberson fit the description given by a man who claimed he saw a “black guy, racing cars” and holding a gun.

The entire situation spiraled out of control all thanks to a fearful man’s false accusations.

How The Police State Uses Crises To Expand Lockdown Powers, With John Whitehead

Lockdown Hypocrisy: Why Are BLM And ‘Pride’ Exempt?