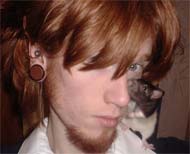 A woman who had literally two good days growing up is going on a vacation this summer to relive those “good old days.”

The only two good days the woman, named Liz, had as a kid was when she went on a family vacation to Disney World. Well, it wasn't actually Disney World, it was an Amish Village in Pennsylvania, but her father told her it was Disney World. Liz was very small at the time and didn’t know the difference. She thought the McDonald’s Play Place on the Pennsylvania Turnpike was the Magic Kingdom.

It was a wonderful two days, even though she was a bit surprised that the rides at Disney World were horse and buggy powered. But she was just happy to be on vacation. She even took a picture with Mickey Mouse. It wasn’t Mickey, of course — it was an actual mouse they found in the hotel room — but still, it was a magical time for young Liz.

Liz got weepy thinking about it, mostly because it reminded her how sad and pathetic her childhood was. But she wanted to relive those two good days through her kids. Her kids, however, were not at all happy about it. They had made a vow to not go outside all summer and this would end their streak at three weeks. Plus, they had never been to a state that was rectangular, so there some geometric concerns as well.

But vacations were very important to their father Tom, who was hell bent on going on vacation every year, even if it was a terrible place that no one wanted to go to. The family always went somewhere weird and cheap that Tom found in an ad in a truck stop coupon magazine. Like next year, for example, they already have their vacation booked to London to visit Big Ben. Big Ben is their uncle who lives in a trailer park in London, Arkansas.