It’s a Friday afternoon in Yerevan, and a few people are gathered on the second-story terrace outside a historic late… 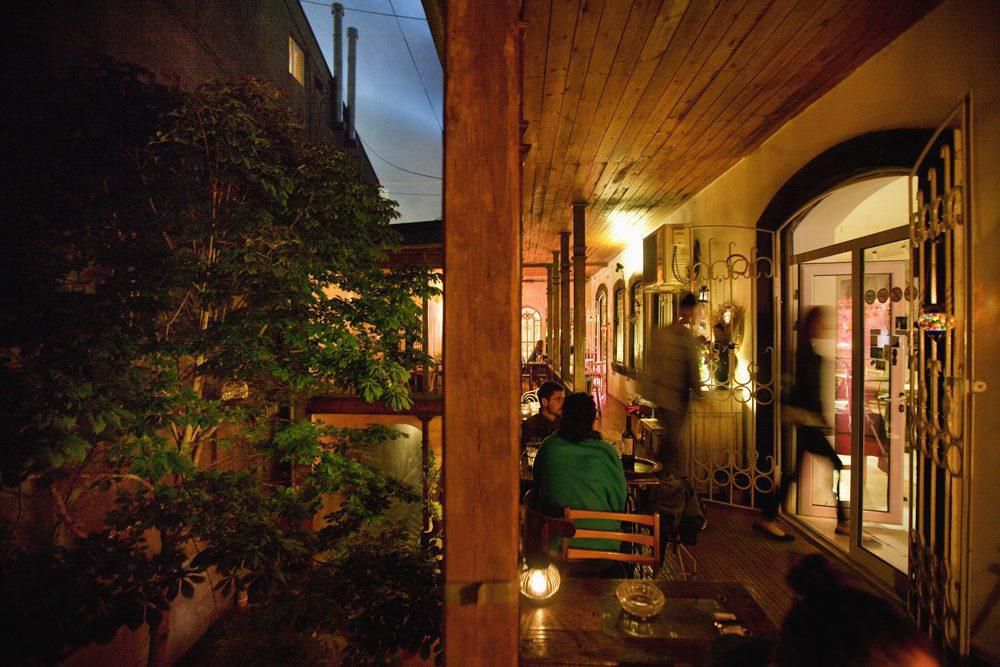 It’s a Friday afternoon in Yerevan, and a few people are gathered on the second-story terrace outside a historic late 19th-century building—a growing novelty among the capital city’s new construction—sipping tea at vintage sewing tables and discussing photo composition. Just inside large black & white images (some with slight bursts of color) decorate the walls, while downstairs shelves covered in photography books line the room. When evening falls, the crowd swaps their teas for gin & tonics, and a local DJ starts spinning electronic tracks.

This is Yerevan’s Mirzoyan Library, home to the largest collection of photography books in the Caucasus region, and growing. But it’s more than a repository for printed works: the library is also an art gallery, workshop space, nightclub, cafe and salon for exchanging ideas. Since opening in August 2014, it’s become a beloved haunt among locals, not to mention travelers who’ve been lucky enough to discover it.

Founder Karén Mirzoyan is an award-winning Armenian-based photojournalist and documentary photographer who’s spent years on the road working for publications such as Time, Harpers and Newsweek. It was while traveling on an assignment that the Georgia-born Armenian first thought about creating a permanent place to inspire would-be photographers in his home country. “I’d always heard that Armenians were [among] the first photographers in the Middle East,” Mirzoyan says, “But these days there’s really no place in the country to even print your works.” In fact, Armenians played a major part in pioneering photography throughout the late Ottoman Empire, a combination of their increasing role as craftspeople and their employment as pharmacists and chemists—a scientific background that offered an edge when it came to using new techniques like daguerreotype, the photograph’s precursor.

When Mirzoyan first began researching Armenian photography around 2012, he could only really find two places to learn about it: The Lusadaran Armenian Photography Foundation, which preserves and promotes the works of Armenian photographers through a website and various exhibitions, and The American University in Cairo, Egypt, where there is a large Armenian community. But there wasn’t really a dedicated space in Armenia where anyone interested in photography could immerse themselves in the art form, pour over books for hours and learn about the practice in general. So Mirzoyan, who says he’s the furthest thing from a business man, decided to create one—beginning with about 100 books from his own collection.

Today Mirzoyan Library is home to more than 600 books and dozens of photography magazines, most of them donated by institutions and individuals (including a curator at the Library des Arts Decoratifs in Paris, who gives Mirzoyan several new books every time he’s in town), and its numbers continue to grow. The library is free to peruse and for internal use only, and ranges in scope from technical books to text books to collections by photography’s great global masters, like Walker Evans, Helmut Newton and Annie Leibovitz. There’s also a shelf dedicated to books by and about Armenian photographers.

Some of Mirzoyan’s favorite books include New York photographer Taryn Simon’s Birds of the West Indies, a humorous visual inventory of the many women, weapons and vehicles in James Bond films, and Sentimental Journey/Winter Journey, a black-and-white photo essay of love—from its halcyon days through death—by Japanese photographer Nobuyoshi Araki. There is also a signed book by the celebrated Armenian-Turkish photographer Ara Güler, known as “The Eye of Istanbul,” and new books from Mirzoyan’s personal collection are added all the time.

From the beginning, Mirzoyan knew he wanted the library to be place for the kinds of creative conversations that linger into all hours of the night, so he added music, cocktails and a space where anyone from traveling photographers to journalists on their way through Yerevan could come to talk, teach and display their works. Mirzoyan has already hosted a series of renowned photographers and artists, including Russian-based documentary photographer Arthur Bondar, whose 2015 photo-book Signatures of War captures WWII veterans in a series of Polaroids; Warsaw-based documentary photographer Maciek Nabrdaik; and Paris-based, Swiss artist Felic Varini, known for his large-scale geometric illusions.

But at its heart, the space is still very much a library. “It’s books that made me want to become a photojournalist.” Mirzoyan says, “I want to give [a new generation] the chance to have a similar opportunity.”

Oklahoma’s Mass Prison Release Is a Drop in the Bucket

He Defended the Confederate Flag and Insulted Immigrants. Now He’s a Judge.

The White House Is Taking Credit for Reducing Opioid Deaths. Here’s The Catch.

Inside the Courtroom Where Every Asylum Seeker Gets Rejected

What Happens When Incarcerated People Get a World-Class Education?

Behind the Scenes of “Ear Hustle”