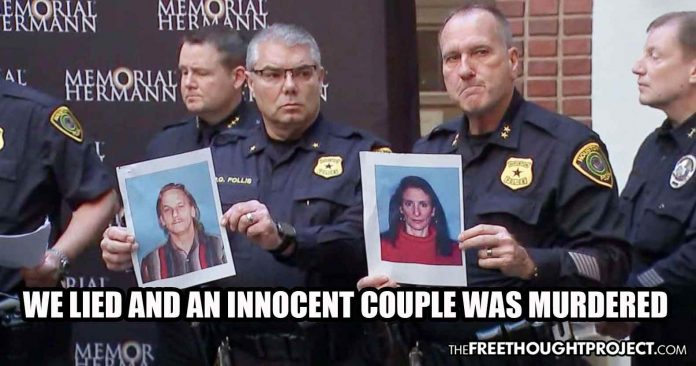 Houston, TX — A botched drug raid last month shook the nation as a couple was killed by police in their own home and four officers shot. Now, after controversy and rumors have swarmed the case, the Houston police department has admitted that the entire raid was based on the lies of one of their own.

As TFTP reported last week, one of the officers involved in the raid was suspended and the department refused to elaborate as to why. Now we know. This criminal cop, lied on the sworn affidavit that led to a raid in which two innocent people were murdered by Houston police officers.

“That’s totally unacceptable. I’ve told my police department that if you lie, you die,”  Houston Police Chief Art Acevedo said Friday. “When you lie on an affidavit, that’s not sloppy police work, that’s a crime.”

The case agent obtained a search warrant to conduct the no-knock raid on Jan. 28 after he swore a confidential informant bought heroin at the home the night before. He said the informant told him he saw a 9mm handgun and a large amount of heroin in the house.

Turns out, there never was a drug buy at the house or an informant who saw a large amount of heroin and weapons.

When detectives with HPD’s Special Investigations Unit interviewed the veteran case agent at the hospital, they asked for the name of his informant.

The officer wasn’t able to talk, but he wrote down the name of an informant he said bought the heroin. Investigators then interviewed that informant, who told them he wasn’t involved in a drug buy on Harding Street. He also said the case agent sometimes paid him for work he didn’t do, according to the affidavit.

Both informants named, along with all other informants the case agent had worked with in the past, were shown photos of Tuttle and Nicholas and their home. None recognized the couple or the home, according to investigators.

As we reported last week, after this cop was suspended, professional instigator and champion of the police state, Houston Police Officers’ Union President Joe Gamaldi doubled down on his claims that his hero cops did nothing wrong and alleged that the suspension had something to do with the officer’s injuries.

“The department made the decision to relieve the officer of duty while a thorough investigation continues,” he said. “Rumors will undoubtedly continue until the case agent is able to be interviewed. Unfortunately, his gunshot wound has resulted in him being incapacitated while surgeries continue. Any assumptions or conclusions made prior to the interview taking place are just assumptions.”

Now, this tyrant who called for silencing and going after those who push for police accountability is forced to eat his words. Naturally, he is still reluctant.

“If these allegations are true, it is certainly concerning and disturbing,” said Gamaldi. “But I want the public to know this does not reflect the hard work of the men and women of the Houston police department.”

Since this tragic incident unfolded last month, TFTP has been reporting that this raid was likely based on false information and that all of this would eventually be exposed. Sadly, we were right along with all of their neighbors and now it appears that an innocent couple was murdered by police—because they lied.

“The truth will all come out,” neighbor Sarah Sanchez, 42, said last week. “It’s not going to bring them back, but it’s going to clear their names and bring them justice.”

Now the question remains of whether or not this cop will be charged with the murder of these two innocent people who did nothing wrong but defend their home from armed invaders who kicked in their door and shot their dog. Will the other officers, who unquestioningly took the word of this criminal cop be held accountable for their role in this murder? Or, will this single cop be used as a scapegoat, be written off as a bad apple, and the taxpayers foot the bill?

From the start, this case reeked of corruption and cover ups. The couple was smeared by police in the media, called dirt bags and those who questioned the official story accused of waging a war on cops. Now that the department has admitted this couple was killed over their lies, will they issue an apology?

Even if they do apologize, no amount of groveling and atoning will ever bring back the lives of Dennis and Rhogena Tuttle. This is why the war on drugs needs to be brought to its knees, now.

Green Reversal? Biden Screams At Oil Companies For NOT Drilling!