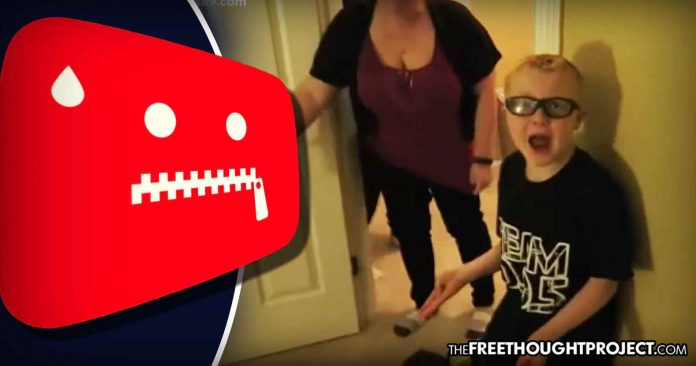 A couple in Fredrick, Maryland lost custody of two of their children last year after a police investigation revealed they were emotionally and physically abusing their children and posting videos of the abuse to their YouTube channel. After being convicted of child neglect last year — for the videos they uploaded to YouTube — not only was their channel not deleted, but the family is back at it, posting videos of their remaining children in the same fashion.

As WUSA9 reports, the existence of the channels FamilyOFive Gaming and FamilyOFive hosted by convicted child neglecters Michael and Heather Martin is attracting new attention online. It has sparked such an outrage that one discussion thread on Reddit had to be shut down.

While YouTube censors videos of US war crimes, guns, and other videos that peacefully question the establishment narrative, the channel of the convicted child abusers continues to flourish, uploading videos of “pranks” and exploits of the Martins and their remaining three children.

One would think that after losing two of their children for abuse, of which was documented on YouTube, the family would discontinue such practices. However, one would be wrong. What’s more, one would think that after a particular channel’s videos were so horrific that they led to a couple being charged and convicted of child neglect that YouTube would delete it. Again, however, one would be wrong.

In 2017, Michael and Heather Martin received probation in Frederick County, Md. for misdemeanor child neglect after admitting the state had enough evidence to convict them, according to WUSA9.

While there are certainly free speech issues at hand in this case, the fact that YouTube is allowing a couple, who is currently on probation until 2022 for crimes they committed and documented on YouTube’s platform, to continue to post the same type videos is shocking and a kick in the teeth to the channel owners who’ve been censored and deleted for peaceful anti-establishment content.

Canadian video blogger Amanda the Jedi uploaded her opinion on the matter and held back no punches.

“A lot of the same things are happening,” Amanda the Jedi said. “There is still footage of kids freaking out because they are being harassed. Pranks which are more directed toward the adults which is probably the smart way to go. But it’s still just very exploitative.”

“Dude basically runs a Roman Colosseum of child abuse with his own kids as gladiators and gets paid pretty well to do it,” wrote a Reddit user.

On Tuesday, WUSA9 asked the family several questions, to which they released only a single statement in response:

“Our family has worked very hard to heal and reestablish ourselves over the past 18 months. Through a lot of hard work and introspection, we are all doing well, and are happy. YouTube is something we enjoy as a family, and we will continue to do it, within the strict boundaries we have set for ourselves. For the sake of our privacy and continued healing, I have no further comment or anything past, or present at this time.”

In the meanwhile, as child abusers are “reestablishing” themselves and making a killing doing it, content creators who use the platform for good and attempt to help society by exposing corruption within government and the establishment are seeing their pages demonetized and deleted. Indeed, every single video TFTP uploads to our channel is immediately demonitized in spite of mainstream media later obtaining the same videos, uploading them to their channels and subsequently monetizing them.

This should come as no surprise, however, as TFTP has long exposed the platform for the propaganda and child exploitation dystopia that it is.

As TFTP reported in April, the Campaign for a Commercial-Free Childhood (CCFC), the Center for Digital Democracy and 21 other organizations formed a child advocacy coalition and filed an official complaint with the US Federal Trade Commission to expose YouTube. The coalition alleges that despite Google claiming YouTube is only for children 13-years-old and over—it knows younger children use the site and it targets them—illegally.

According to the Children’s Online Privacy Protection Act (“COPPA”), it is illegal for any operator of a website or online service or a portion thereof that is directed to children, or that has actual knowledge that it collects information from children, from collecting, using or disclosing personal information from a child unless the operator gives parents notice of its data collection practices and obtains verifiable parental consent before collecting the data.

However, according to the complaint filed by the coalition, Google is knowingly violating this law.

YouTube has a sordid and dark history when it comes to promoting and allowing the exploitation of children on its platform.

As The Free Thought Project first reported in June of 2017, comedian Daniel Tosh raised concerns with objectionable content found on YouTube. Tosh revealed how the “Seven Super Girls” channel—while it is geared to teenage content creators—likely also serves as eye candy for pedophiles looking to indulge in streaming videos of real kids in compromising situations. The channel remains active and unrestricted.

As artist and writer James Bridle noted in an article last year, detailing the vast industry of low-quality, algorithmically-guided children’s content created for youtube: “Someone or something or some combination of people and things is using YouTube to systematically frighten, traumatize, and abuse children, automatically and at scale, and it forces me to question my own beliefs about the internet, at every level.”

Indeed, as this most recent case illustrates, YouTube may very well be found to be complicit in this exploitation.